He saw the potential of the sport and was one of the early participants and promoters of crappie fishing. Not just for fun, but also as a form of competition. He was, as they say, ahead of his time.

There were few that could top him on the lake when it comes to catching fish. He’s slowed down a bit, but he can still catch his share when he puts his mind to it. But today, he just enjoys seeing others enjoy the sport and is amazed at where crappie fishing has come.

One of Phillips’ claims to fame was as owner and operator of one of the state’s most popular and legendary fishing tackle shops, the Honey Hole in West Monroe. It’s still a go-to spot for crappie anglers from the area and visitors from near and far.

His influence has not gone unnoticed. His accomplishments led to his selection as a member of the first class of the Louisiana Chapter of the Legends of the Outdoors Hall of Fame.

This writer has put in thousands of hours in the boat with anglers, but none has been any better at calling his shots than Bobby Phillips. And that was before any fancy electronics helped anglers see underwater. He could pull up to a stretch of cypress trees, pick one and then call his shot by saying, “there will be one right there.” Dropping a jig in the water, it wouldn’t be long till the pole bowed and the fish flopped in the boat.

“Told you,” he would say with that humble, but smirky grin, as he hoisted the slab crappie out from under a green willow limb in the spring. His jig had barely hit the water when he got that sought after “thump.” It is a scene that has been repeated thousands of times in different lakes and with different partners.

Today, Phillips has retired from the bait business and picks his fishing trips carefully. But he hasn’t lost his sense of humor.

One has to pay close attention to his constant fishing talk to pick the bits of truth and wisdom. He often posts pictures of fish on social media that he and his family members catch on the Ouachita River near his home. When people ask where he caught them, his standard answer is, “Somewhere south of Little Rock.” Well, since the whole river is somewhere south of Little Rock, that pretty well narrows it down. But in the same sentence, he’ll tell you if they are deep or shallow and what they are hitting for true. 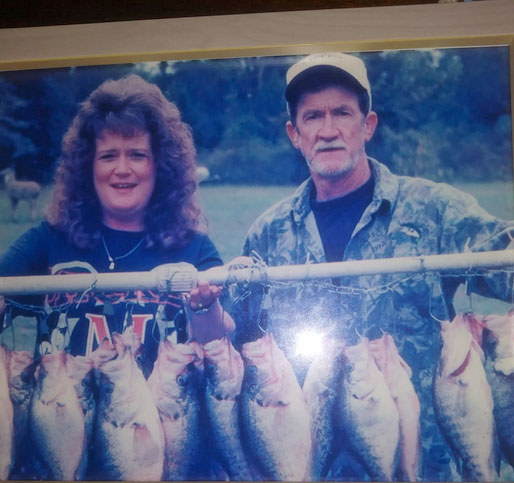 Then he’ll warn you not to get too close to the posted sign or the llamas will get you. Is that a clue….or something you’ll never figure out? Vintage Bobby Phillips.

“You know I love crappie fishing and I love to see other people crappie fish, not just go, but catch fish,” he said. “There’s nothing better than seeing someone who doesn’t think he can catch them suddenly learn how. That’s what it is all about.”

Of course, Phillips makes no bones about it. One of the main reasons he loves crappie fishing is that he loves crappie eating. He’ll fry them up with a platter of fresh vegetables from his large garden and make everyone who sees the pictures envious.

Phillips is still active in promoting the annual Ronald McDonald House fishing tournament. The Ronald McDonald House, which assists families of young hospital patients in long-term care, has benefitted from the river’s popularity. For 24 years it has hosted a bass tournament that draws more than 500 anglers. The tournament nets a $10,000 prize for the big winner, but more importantly, it is the primary fundraiser for the charitable organization.

Phillips even entered a modern professional crappie tournament a couple of years ago. He didn’t win, but he appeared to have more fun than anybody. Phillips is 79 years old today and even though his level of activity has slowed, his love of fishing never will. His family members are his favorite fishing partners.

Phillips has been catching crappie on the Ouachita River since before most of the competitors in the event were born. He started out when he was five years old and he recalls he didn’t even know he was fishing for crappie.

“They called them ‘specks’ and we used a hand-cut cane pole with cotton line and a big red and white bobber,” he recalls. “Then we fished for white perch and now they call them crappie or sac-a-lait. Times have changed, but I still just like to fish with a single pole with a jig or shiner and especially love the early part of the year.”

Phillips calls his old homeplace, Woodlawn Plantation, home. It’s down there in south Ouachita Parish somewhere south of Little Rock. He has worked at several jobs and traveled all over the country doing construction, painting and all kinds of labor. But the love of his working life was the tackle store, where he helped promote tournaments long before it was popular. He even fished regional crappie tournaments back in the day and did pretty well at it.

But his thoughts are always with others.

“Today, we’ve made a mess of a lot of things in this country, but it is still the greatest country in the world,” he said. “Fishing is just one example of that. We are blessed to be able to do whatever we want to and to work at whatever we want to. Helping others is an important part of it.

“If you aren’t helping others, then you really aren’t helping yourself,” he said. That includes learning to fish or giving someone a helping hand in life.

You can learn more about the Outdoor Legends Hall of Fame, founded by Garry Mason in Tennessee and led in Louisiana by Peyton McKinnie of Marion, on Facebook.

Natural Forage Baits are in demand at Toledo Bend