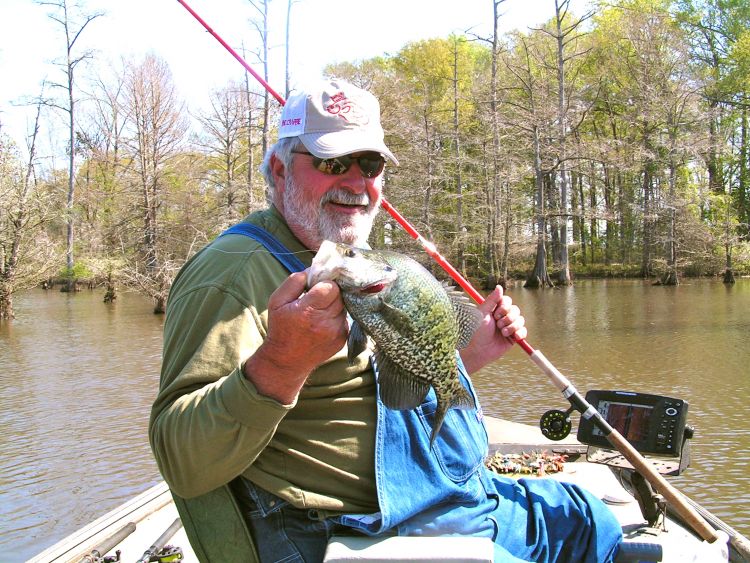 On Lake D’Arbonne, February means crappie action is just about to kick in. And that means local angler Rick Hill is ready to mop up.

If you travel around crappie fishing circles in Northeast Louisiana, you probably heard about how good a crappie fisherman Farmerville’s Rick Hill is.

But you won’t find him spider-rigging in the front of a big fancy boat. Nor will you find him on the trophy stand at any crappie tournaments.

None of that is for him.

Where you will find him regularly, however, is using the cleaning station at “Hill’s Perch” almost every single day during  prime crappie time.

On Lake D’Arbonne, where crappie is king,  Rick Hill is top of the heap — and he rules with a sharp jig hook and an open livewell.

Hill almost always fishes by himself, but he’s helped numerous crappie anglers find their way around the lake, taught them how to catch fish and even brought them along to demonstrate his techniques in person.

I told him if he ever wanted to go give somebody a lesson, I was a willing learner. So I was happy when a text message came through telling me the time was finally right.

We headed out up the D’Arbonne arm of the lake with the idea of fishing some of his best spots. February on Lake D’Arbonne and most large North Louisiana reservoirs is a special time.

It’s when big schools of crappie stay in the deep channels, suspended about 10 to16 feet deep in 20 to 30 feet of water. It’s also when crappie start migrating from the edges of sloughs and creeks onto flats, staging for spawning.

And it’s when some of the front-runners are already scoping out their favorite cypress trees in shallow water for the spawn. In other words, the fish can be just about anywhere.

“All the crappie aren’t in one place or one type structure all the time,” Hill explained. “From winter into spring, there are crappie on the move — and you can catch them in a lot of different areas.”

Locating fish is, of course, the top priority. But Hill’s expertise in how crappie bite might just be the best thing he can pass on to other anglers.

“I fish jigs, hair jigs mostly,” he said. “Here’s the deal. There is no set pattern on how crappie are going to react to the bait on a single day. I work the jig differently until I find what the fish want. The main mistake people make jig fishing is going way too fast. I fish slow, and when I think I’m going slow enough, I slow down some more.

Some days crappie hit the jig when it’s falling. When that happens, he goes to a 1/32nd-ounce jig to keep the lure in the strike zone longer. Some days fish will smack anything you put in front of them. For more feel and control, he uses 1/16th-ounce jigs.

Another crappie tip Hill shared is not expecting fish to hit with their patented “thump” every day: Fish hit different ways in different conditions. The more of these types of subtle bites you can detect, the more fish you’ll catch.

“A lot of times you do feel a thump, especially in the spring,” he said. “Some days, it is just a tick, which is a barely noticeable bite. Sometimes with bigger crappie, you may not even feel the fish hit at all.

“They may eat it from the bottom and you just notice a sudden feeling of weightlessness. Pay attention to how that is going, and you’ll catch more.”

On occasion, Hill says fish will even nibble and you’ll get a feeling like the bait is dragging over a roadbed or something rough. That, too, is a crappie bite.

To get the most feel no matter what the fish are doing, Hill recommends holding the pole in one hand and running the line between your thumb and forefinger of your free hand: You’ll feel as many hits with the line as you do by hoping to detect them with the rod.

Regardless of how they hit, you won’t catch lots of crappie unless you set the hook firmly, he said.

Don’t be worried about taking it away from the soft-mouthed fish — set the hook with authority.

Hill’s favorite equipment includes a Todd Huckabee Pro Series 10-foot, 6-inch rod with Gamma fishing line. He uses 6- to 10-pound test line based on the size jigs he is fishing, with smaller line for smaller jigs.

His favorite hair jig is the Black Lake 120 series, and he also fishes Garland plastic-body jigs. His favorite colors are bluegrass, electric chicken and Cajun cricket, and he uses mostly red, pink and chartreuse jigheads.

When Hill isn’t jigging, he also utilizes the cast-and-drag method he was taught by longtime D’Arbonne crappie angler Don Durrett.

When you do that, simply cast out the bait, count it down to the desired depth and reel it in slowly. The technique works well on staging females and in deeper water situations for crappie, but Hill said it also will work for spawners on the bank. He uses the same baits as when jigging, but also adds the white, green-backed Mr. Twister Little Fishy or Glitter Critter Garland for casting and dragging.

Hill has found true happiness catching crappie, and enjoys sharing his knowledge with willing listeners. He was born just outside of El Dorado, Arkansas and lived there until high school.

In those days, he fished D’Arbonne when it was full of green timber. His family moved to Iowa and he graduated from high school there, then played football at Cornell until he got injured. Ultimately, he moved back to Ruston to finish at Louisiana Tech. After that, he never left the area —  or Lake D’Arbonne.

With the uptick in competitive crappie fishing and his routine success, you might think Hill would put all this knowledge and skill into tournaments. But it won’t happen.

“I fish when I want to,” he said. “I don’t need anybody to tell me when to start, or when to quit, or what day to fish. I let the fish do that.”

For lots of big D’Arbonne crappie, that was their last mistake.

When it comes to finding crappie on trees, concentration and patience are important. But nothing can make up for experience.

“Year in and year out, the same trees usually hold crappie,” according to Rick Hill. “It may be the root structure or the bottom soil or a little change in depth. Or maybe they just like it. But if you catch fish by certain trees or groups of trees on one trip, go back to them over and over.

“You’ll still catch fish as long as they are on that pattern.”

In the spring, there is a constant migration to the trees for six to seven weeks. If you catch a few out by one tree, more will usually move in — often within a day.

But one thing most fishermen never notice happens a bit later in the spring when crappie start spawning out.

Hill approached one of his favorite trees, preparing to drop a brown hair jig right by the trunk, then said, “Nope, we are too late. See?”

What he saw was literally hundreds of crappie fry swimming around in a bunch. He noted that anyone fishing there would be wasting their time.

The crappie had obviously nested there early and the fry had already appeared, about a quarter-inch long swimming around the tree in a circle trying to figure out what to do next. Most people would have never noticed, much less equated it to what was actually going on.

Lesson No. 2 should have been much more obvious. 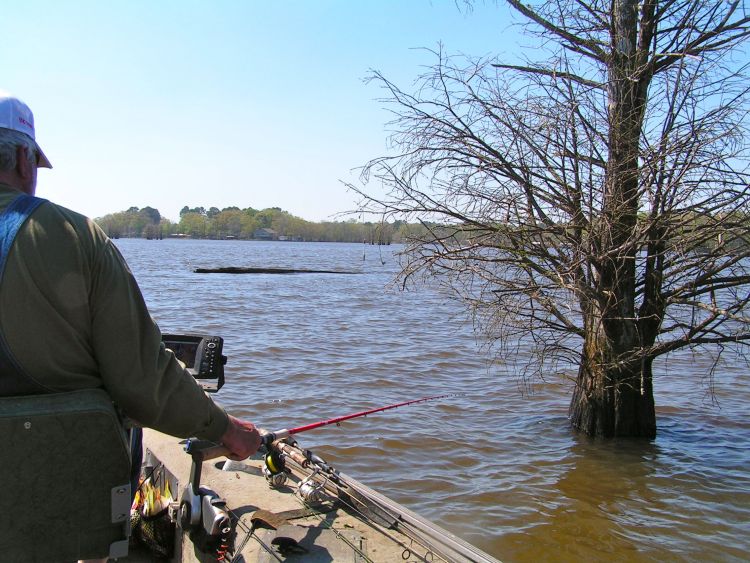 When Hill is crappie fishing, he always keeps his bait in the water. He doesn’t raise it from one spot and drop it in the next. He just slowly swims it from spot to spot.

That’s why most people he fishes with spend more time holding the dip net for him than he does for them.

“Those fish you caught…” he asked this writer. “Where was your bait when they hit it?”

Yep, in the water.

How simple is that?

If you want to stay on Rick Hill’s good side, just mind your manners. Or, to be more exact, mind your minnows.

That’s easy — don’t even mention them.

“If there is a crappie that is going to bite, I can catch him on a jig,” Hill said. “That sounds cocky, but it’s the truth. I know minnows catch fish, but they are just too much trouble. And I’m not into fishing with eight poles, so I keep my hand on the rod and feel the fish bite.

Some people say you get more bites on minnows, and Hill doesn’t disagree with that — but what he will dispute is the percentage of strikes you feel with a minnow versus some sort of jig, whether hair or plastic.

He does break down and put a pole in each hand when the fishing is right, but that’s about as far as he goes.

And tournaments just aren’t for him: His competition is personal, between himself and the fish.

But Hill does use a variety of baits. He keeps his favorite proven jigs hooked into a piece of foam attached to the front deck of his boat, always within easy reach. It was given to him a decade ago by another crappie fishermen, and he loved the idea.

But if you’re looking for some sort of hint at the bite by looking at the pile of baits, forget it. He’s got just about every color and style available within his grasp, and all of them look a bit worn from doing battle with crappie.

“To each his own — and this is my own,” he said, with a bearded smile that lets you know when it comes to catching crappie, his confidence can’t be topped.

And usually, neither can his catch.