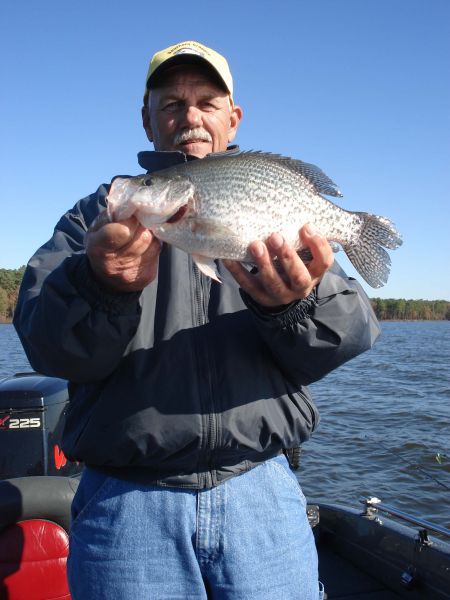 Fishermen in the Southeast who wait until March to break out their crappie rods, minnow buckets and tackle boxes full of tiny jigs and soft plastics are missing some of the best fishing of the year, according to North Carolina crappie guru Ed Duke.

Duke, who has operated and fished crappie tournaments for years and now manufactures rods and baits for crappie fishermen, said February fishing for slabs can be as good as March fishing for bass. Fish are in the same prespawn mode, feeding up for the stress of their upcoming reproductive season – crappie just get there a month earlier than bass.

“In February, you are going to look for staging areas for prespawn crappie,” said Duke (www.southerncrappierods.com). “Staging areas are usually in the mouths of all the major creeks on a lake. You’re looking for any kind of place where deep water and shallow water are close together, so crappie can move up and down with the weather fronts.

“And you have a lot of structure, a lot of ledges that drop off into creek channels close to the mouths of creeks. I define structure as the contours in a lake.”

Duke said he looks for creeks that have fairly deep water in their channels. He calls the wedge of water between 25 and 30 feet deep their prespawn “safety zone.”

Early in February, Duke said he looks for schools of crappie to be holding tight to the bottom of creek channels or tight to the big changes in contour, those ledges that drop 8 to 10 feet from the flats into the channels.

Once the water starts to warm up a little later in the month – and the daylight hours get longer – fish tend to migrate to the middle of the creek channels and suspend over deep water.

“They’ll hang in the deep water and come up on pretty days to catch sunlight,” Duke said. “You’ll get fish suspended in the middle of the creeks over deep water.”

When fish are holding tight to structure, Duke needs to be able to fish close to the bottom, so he tight-lines vertically, dropping a weighted minnow-rig with a 1/32-ounce jighead or No. 6 barbless hook. He’ll thread a live minnow on both, but he’ll often thread on a Southern Crappie hair jig and a minnow on the jig. He’s partial to the blue/chartreuse color combo.

When tight-lining, Duke fishes a handful of 14-foot Southern Crappie rods in rod holders around the bow of his boat so he can fish all of his baits straight down, almost vertically below the transducer for his depth finder that’s mounted on his trolling motor.

When fish move out and suspend over the channel, he’ll go to a long-line trolling method where he staggers 7-, 9- and 12-foot rods out of the stern of his boat and trolls tiny, soft-plastic baits on jigheads well behind the boat.

“You can cover so much more ground in a short period of time and find schools of crappie,” Duke said. “That’s the most-productive method of catching them when they move up.

“When I long-line, I prefer curlytail grubs like Kalin K-Grubs or Triple Ripple grubs. But I fish fan-tail grubs like AWD Crappie Snax and Charlie Brewer Slider grubs.”