Don’t let the calendar fool you; plenty of panfish are ready to eat just about anything in August in the Atchafalaya Basin, thanks to great spawns in recent high-water years.

In 2011, during the spring and early summer, the Atchafalaya River at Morgan City flooded low-lying coastal areas. Six feet of water is considered flood stage, and the river finally reached a historic crest of 10.35 feet on May 29; it took nearly three months before it fell below flood stage.

Since 2011, the Atchafalaya River has crested well above flood stage five times, including four times in the past five years.

In 2019, the Atchafalaya River crested at 8.29 feet in mid-March and crested again at 10.06 feet on July 13, when Hurricane Barry passed through. All total, the river was at or above flood stage for 235 consecutive days.

A number of years ago, Mike Wood, then inland fisheries director of the Louisiana Department of Wildlife and Fisheries Inland Fisheries Director, discussed at a conference the impact of the 2011 flood event on local fisheries.

One of things he pointed out was the explosion of fish that would occur in subsequent years as a result of the flooding. Essentially, he explained how fish are able to spread out during the spawn, when the water is over the bank for long periods. As a result, there is less competition for bedding sites and less predation, ultimately creating a bumper crop of fish.

Most years, the lower part of the Atchafalaya Basin — in places like Flat Lake, Duck Lake, American Lake, Bear Bayou, the Orange Barrel Canal and the Shell Oil Canals — is typically teeming with panfish. Anglers often will head to the region during the spring, usually starting in April, and they literally mop up on redear sunfish, aka chinquapins, bluegills, and goggle eyes, aka warmouth, during the spawn.

Brian Salyers, an LDWF biologist, pointed out that redear sunfish can actually spawn multiple times during the spring and summer, and even into early fall if the water remains warm. He said that research suggests the ideal temperature range for redears to spawn is 69.8 to 89.6 degrees Fahrenheit, with the peak temperature being 75 degrees.

What that means for bream anglers who enjoy fishing the southern portion of the Atchafalaya Basin is that the high-water trend has simply delayed catching a good mess of panfish until later in the summer. Furthermore, there still may be some spawning chinquapin and bluegills to catch, which no doubt will provide plenty of action due to their abundance.

When the water falls

At some point, what goes up must come down. When high water begins to fall, it’s time to be fishing the southern half of the Basin. Generally, that fall lasts only for a short period, often less than a couple of weeks. There is a sweet spot when the water falls below flood stage, usually between 4.8 to 5.3 feet according to serious anglers who pay attention to such things.

Essentially, all fish tend to like moving water for feeding purposes. Although bluegills and chinquapins are, in some regards,  prey for bass and other large fish, they aren’t any different. Panfish will dart in and out of cover and eat invertebrates and small minnows that pass within striking distance.

One of the better techniques is to look for locations where the water is moving through groves or groups of cypress and tupelo trees. Casting to the back or downstream side, using either live or artificial bait, typically produces larger fish, often as big as your palm from fingertips to wrist. The same holds true for patches of sub-aquatic grass close to the bank that water flows past. Bream will dash out to grab your bait and run back into cover.

Other good spots for chinquapins and bluegills are narrow bayous and ditches created by fishermen targeting crawfish that flow into larger bayous. The drains may not be large enough for your boat, but they shouldn’t be passed up.

It’s a matter of anchoring your boat near, but not on top of the mouth of the drain, and casting as far back into it as you can. If fish are there, your float should drop below the surface before the current pushes it back to you.

If a perch bites immediately, the action should be steady, with one caveat. A couple of weeks after Hurricane Barry passed in 2019, my wife and I fished Bear Bayou above Flat Lake. We set up on a drain with a thick patch of grass that had water flowing around it and caught fish on nearly every cast. The problem was, with subsequent years of high water, we had to cull through numerous smaller, bait-stealing fish to get the keepers we wanted to fry.

Wood’s explanation of bumper crops of fish in subsequent years after flood events held true. When the water dropped below flood stage, lots of panfish, big and small, came off the bank and could be caught with ease.

On the web, visit https://water.weather.gov/ahps2/hydrograph.php?gage=mcgl1&wfo=lch to get the National Weather Service’s graph and 8-day river stage prediction. The information is accurate and important for making a successful trip into the Basin. 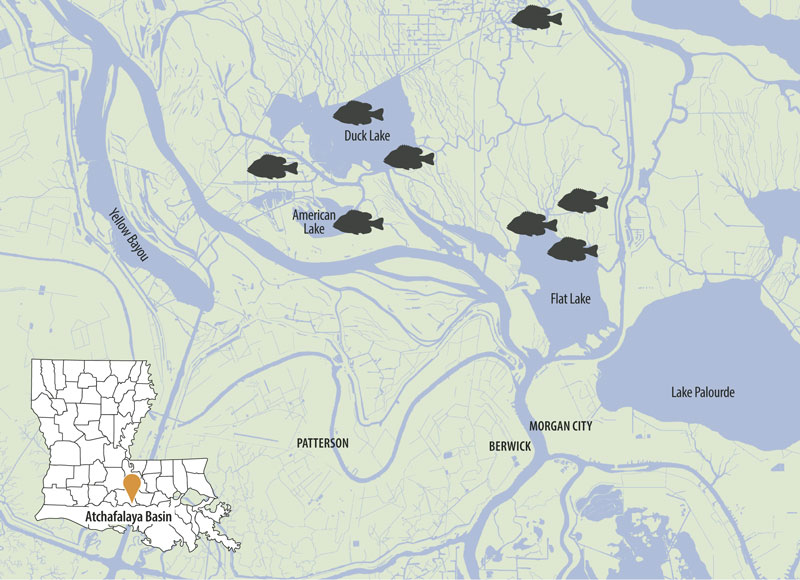 After the fall techniques

During the latter part of the summer, when the water in the Basin is stable and down to the 4-foot range, the bite tends to slow a bit. Quite often, it comes down to technique and taking advantage of what the location has to offer.

In places like American Lake and Duck Lake, where there is clear water and lily pads, you can fan-cast and cover a broader area to help you locate fish. Once you find them, you can use whatever bait that you prefer, live or artificial.

If the area is grassy, look for holes that you can drop a bait down into and try jigging without a float.

It’s the same with groves of trees. Try jigging around cypress trees without a cork at various depths. This technique always produces a few fish on the toughest days.

Gerald Foulcard, a local angler, grew up fishing for bream and sac-a-lait with his father in the Basin. Foulcard said his father taught him to use tube jigs in various colors: blue/white, chartreuse, black/pink and white. However, when the fishing was difficult, father and son would spice it up a bit.

“When the bite was tough, we would add a piece of grass shrimp or night crawler to the hook and 1/16-ounce leadhead,” he said. “It worked a lot of times when it was tough catching them. We’d also use the small grub-style Beetle Spins but substituted a gold blade for silver. The gold seemed to work better for us.”

“All worked real well at the edge of grass and cypress trees,” Foulcard said. “We would also fish them underneath corks, usually about a foot to up to 21/2 feet, depending on the depth we would catch the first fish in. You’ve got to let the fish tell you where they are through trial and error, but once you find a few, the rest will most likely bite the same.”

Most any float — round plastic, Styrofoam bullet-shaped or balsa — will work for bream, but my preferred float is a premium balsa spring float. Thill also makes a premium weighted spring float that works well.

When the bluegill bite is finicky and they barely suck in your bait, often the cork you’re using will hardly move. Balsa floats twitch with the slightest of bites and often make the difference.

Another year of high water may have delayed your trip into the southern portion of the Atchafalaya Basin to fish for bream, but don’t let that stop you from going now. The summer months can be spectacular.

During the summer, it’s wise to fish early mornings and late afternoons, but when the bite is on, you need to take extra precautions against the sun. Be sure to bring sunscreen of SPF 30 or higher. Hats with wide brims are recommended, along with UV protection apparel.

When there is plenty of action, you often forget to hydrate. Be sure to ice down plenty of water. A good, quick substitute is pieces of watermelon iced down in a container. Watermelon provides a source of water and has some nutrition value as well.