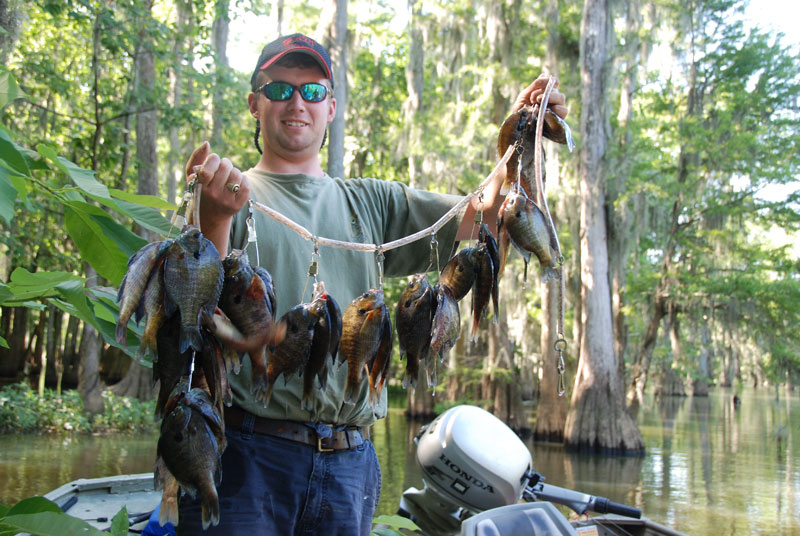 Very few fishing standards are as widely held and undeniably truer than fishing for bream around the full moon in May, which falls this year on May 26. For generations, grandpas have passed along to their grandsons the simple wisdom that bream bed on the first full moon in May. Another simple aspect of grandpa’s advice is that the same tackle, tactics and approach that supplied him with plenty of fresh bream fillets still work just as well today.

Matthew Outlaw is living proof. His fishing friends on social media often get their feelings hurt as he posts photo after photo of coolers loaded with better-than-hand-sized shellcrackers and bluegills. Ask him how he does it, and he’ll just shrug; he grew up fishing in a swamp, same as his father and grandfather. He’s also fishing pretty much the same way those before him did.

For example, Outlaw is not a fan of using trolling motors for bream fishing. He fishes from a 14-foot john boat, and when he gets in the vicinity of places he thinks he may find bream beds, he gets out a short paddle and sculls.

“The worst thing you could do in here is run the trolling motor,” Outlaw said as he sculled with one hand and flipped his cork back into a hole from which he had just snatched a feisty, hand-sized bream. By maneuvering his boat the old-fashioned way, using a short oar to hold the boat in position, Outlaw was able to land the cork in the still widening ripples the earlier  fish had made upon its exit.

Just like the previous dozen or so times, the cork hit the water, paused, then suddenly sank from view as if it had been tied to a brick. Outlaw hoisted back on his long, jigging pole and swung a carbon copy of the most-recent fish into his grasp.

Another example is his tackle. The bream-fishing rig is simple. Grandpa’s bamboo cane pole has been replaced by an ultra-light, graphite jig pole widely known as a Breambuster, but from the tip of the pole forward, time stands still. A 4- to 5-foot length of 10-pound monofilament is rigged with a No. 6 hook, split-shot weight and topped off with a toothpick cork.

The bait, impaled right through the carapace, is a garden variety bait-shop cricket ­— one of about 200 that are in a wire mesh box at Outlaw’s hip as he sits, feet dangling in the water, on the front deck of the john boat.

No action or retrieve is needed; simply drop the rig into the bed and wait for the cork to go under or slew off to the side. When the action is hot, the cork may not sit on the surface for more than a second or two.

Although his home waters are well-known and yet widely misunderstood for producing larger-than-average bluegills and shellcrackers, it is a big place, full of trees and stumps and lily pads, and not all locations are suitable for bream beds.

Outlaw points out that the No. 1 factor for bream to bed is a hard bottom. Second is cover. He doesn’t have much success around live cypress trees, finding instead that dead trees, stumps and fallen limbs have better appeal to spawning bream.

“I’ll paddle into a swampy looking area, and if there’s a stand of dead trees or a blowdown tree that’s dead in the water, I’ll ease over and probe the bottom with my rod. If I feel a hard sand, gravel or clay bottom, it’s a pretty good bet there’ll be some beds around it.”

May is the month when male bream infiltrate the shallows and begin seeking out and creating nesting sites. They prefer hard bottoms for nesting, even if that hard bottom is covered with several inches of mud. To get to the hard bottom, male bream will fan the bottom with their tails and create a saucer-shaped nest. Although this is can be accomplished in open water, as in the case when water levels are low, bream feel much safer and more secure hiding their nests around structure.

“The hardest part about catching bream this time of year is finding them,” said Outlaw. “I may spend a good half a day checking out possible locations before I come across bedding fish.”

“I much prefer to have the water level about 3 or 4 feet above the original bank,” he said. “That puts 2 or 3 feet of water up in the cypress and willow trees and makes it easier to locate bedding fish. If the water is too high, there can be acres and acres of places for fish to bed, and if it’s too low, there’s not enough shallow bottom.”

Outlaw finds more bream on the beds around the full moon and then, around the new moon. He concurs that for a few days between these cycles, bream show a tendency to pull off the beds and hold in a little deeper water, but they’re back a couple of days before the next moon and will repeat that cycle up to three times over the course of the summer.

“I start looking for bream on the beds the week before the full moon,” he said. “Bream will go to fanning their beds, and when they do, they stink. You can smell them from 100 yards away. That fanning will also cause bubbles in the water. When I’m in an area I think bream would bed in, I’ll approach with the wind in my face so I can smell them and I’ll look for bubbles or fish popping on the surface.”

Once he’s found a couple such spots, it’s time to start getting his fill.

While the lion’s share of bream in the Southeast fall prey to natural baits, there are certainly artificials that are capable of filling a livewell just as quickly — without the mess and hassle. One of the best, time-tested artificial baits is Accardo’s Ligon Bream Killer.

Some years ago, the Accardo Tackle Company acquired the rights to the Ligon Bream Killer and has been producing the slow-sinking, wet fly ever since.

“The Bream Killer is our best-selling fly, and is No. 2 in sales of all of our baits behind the Accardo Miss Prissy,” said Don Davis, who runs breambugs.com, an internet retailer selling all manner of bream-catching artificial baits.

The Bream Killer is hand-tied on a No. 8 hook with soft chenille topped with squirrel hair trim and white rubber legs. The slow-sinking action of the fly is more than big bream can resist. The Bream Killer is best fished with fly tackle but easily converts to spinning tackle with the use of a small popping cork or strike indicator to give the fly some weight.

Davis also suggests using the Bream Killer in a Popper-Dropper rig and has put together instructions on how to tie it.

“I like to use a 6-pound test leader tippet about 5 feet long and add whatever cork body popper you like,” he said. “The bug becomes your strike indicator and can also catch fish. To this, I add another 4-pound test leader tippet about 4 feet long with a Bream Killer as the dropper. I simply tie the second tippet by sliding the line through the hook eye of the popper and tying it tight.  You may want to experiment and vary the length and size of the secondary tippet to suit your dropper fly, cast and delivery. Seldom do the two lines entangle, and you will often catch two bream at the same time.”

The story Bream season arrives on May full moon first appeared on CarolinaSportsman.com.