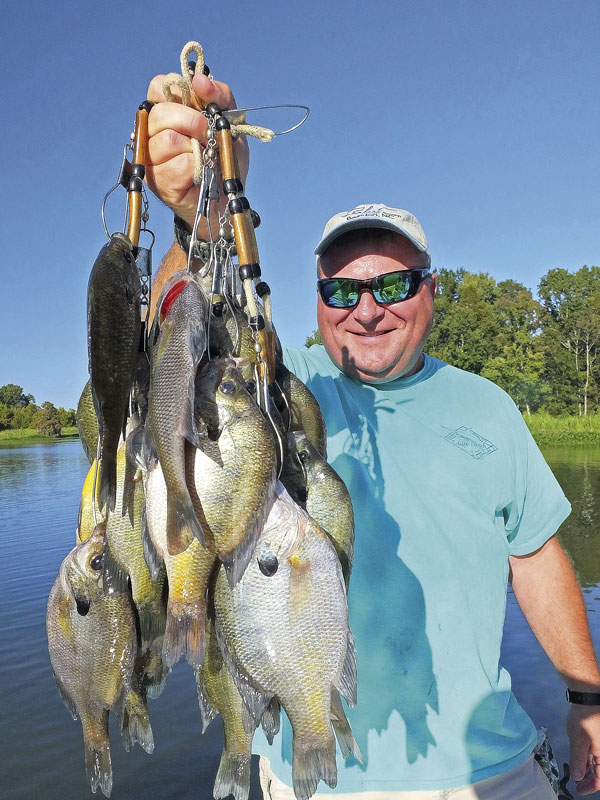 Lafayette attorney has the number of countless chinquapin and bream in lakes within the Atchafalaya Basin, particularly Cow Island Lake. Here’s how he fills his fish cooler.

Catching bream in a breathtakingly scenic area of the Atchafalaya Basin conjures up golden memories for James “Jimmy” Domengeaux of Lafayette.

Domengeaux sees himself as a young boy fishing with his father, the late Judge Jerome Domengeaux, eagerly watching each time for a cork to tremble and sink below the surface of Cow Island Lake under the weight of a hand-sized panfish. His father, who was chief judge of the Louisiana Third Circuit Court of Appeals, took him there often, and the boy who grew into an attorney and father himself is oh-so-thankful he did.

There are plenty of breathtakingly scenic areas to catch bream anywhere in the nation’s last great overflow swamp. When Domengeaux takes a spring and early summer break from bass fishing, which he loves for fun and competition, he points the bow of his boat to Cow Island Lake to target bream and chinquapin, aka shellcrackers, redear sunfish.

He usually leaves with 15 to 40 bream and/or chinquapin if he’s alone, 50 to 75 if he has a guest, taking with him a renewed sense of peace from the outdoors he cherishes and photographs.

“Even though I do bass fish a majority of the time year-round, bream and chinquapin fishing in the spring and summer brings back so many good memories of when I was fishing with my father and brother,” Domengeaux said in early April, which is about the time chinquapin begin bedding throughout the Basin.

Cow Island Lake is a hidden treasures. It’s easily accessible when the Atchafalaya River stage at Butte La Rose is above 15.3 feet, but an adventure, to put it mildly, when the river stage is below 15.3.

Domengeaux, 62, doesn’t “pull over” the weir on the lake’s lower end like he did when he was younger, but he does go regularly — make that religiously from April through June —when the water level’s high enough to drive in with his aluminum Hanko boat, albeit carefully.

Domengeaux’s father, who was Lafayette’s mayor in the late 1950s, introduced his young sons to pure bliss on the water when he took them fishing in his 18-foot aluminum boat, which he kept in a stall at the old Robin’s Landing, a private boat ramp along the West Atchafalaya Basin Protection Levee. They fished Henderson Lake, of course, but also Cow Island Lake and other hotspots in the spillway. And when the bite was tough in other areas, the little lake was and remains the place to be.

Domengeaux still prefers to use red/white corks when he’s fishing with worms or crickets. Catalpa worms, on which he caught so many panfish as a boy, generally are hard to get. He sees that boy again in his mind every time the cork goes under.

The red/white corks, he confided, strictly are for “nostalgic purposes.”

Domengeaux said after the chinquapin run  in April and May, bream heat up around the 445-acre lake that’s about 9 miles southeast of Henderson and west of the Atchafalaya River.

“Those chinquapin, they’re fun,” he said. “They also fight harder than bream. I like to fish chinquapin, which I believe spawn earlier, in April or May.”

Domengeaux recommended keeping a natural or artificial bait in the water to keep chinquapin action fast and furious once they start biting.

“When you catch one, you’ve got to keep fishing fast because they frenzy up. Keep throwing in the same area,” he said.

Break out the flyrod

The early summer bream bite can be fabulous. Domengeaux targets them with either the same 10-foot J.B. Salter’s graphite Jiggin’ Pole he uses for chinquapin or else one of his two fly rods, a 4-weight Wind River model or a 5-weight Temple Fork Outfitters. He also casts a ¼-ounce chartreuse/black or white/red dot Johnson Beetle Spin on an ultralight Zebco rig when he’s fishing with natural bait.

The art of fly-fishing hasn’t escaped Domengeaux. He has his all-time favorite artificials, which just happen to be highly preferred by hungry bream very early and late in the day.

“My real joy is using fly rods,” he said.

But it’s the hand-tied flies and the bite they trigger — breaking the surface with that unmistakable pop-plop — that he reveres most while bream fishing before or as the sun rises or in the evening.

“Real, real early and late is the best time to catch bream on a fly. There’s nothing more fun than that,” he said.

“The best way I can describe them? I call them bull bream, bigger than your hand,” Domengeaux said.

Water clarity usually is prime for fly fishing. Most of the time the lake is clear, particularly on the northern end. He’s partial to water with a greenish tint, and he’s never seen clear, black water, the color that might suggest “dead water” in there.

Pull over when necessary

Boaters get into the lake on the southern side. When the river stage is higher than 15.3, Domengeaux and others drive their boats in, carefully, over a weir. That’s where the river enters the lake, right off the Little Atchafalaya River.

Once the water level falls below the weir, anglers determined to feel the thrill of catching bream and chinquapin must physically move, i.e. lift and push, a preferably light, flat-bottom boat over the control structure. There are strategically placed pieces of wood and/or PVC pipe to “roll over” the top.

“I pulled over many times in the old days. The last couple of Junes, I’ve been able to get in (without pulling over). That’s the way I prefer to fish when I’m 62 years old,” he said.

Pulling over can necessitate running the bow of the boat up the path until gravity stops it. The challenging next step involves pulling the boat 7 feet at about a 45-degree angle, and from there, there’s a drag up a slight, 40-foot incline, then back down another 40 feet to the cut that takes boaters into the lake.

In an effort to make the portage easier and keep the weight down, anglers often bring a trolling motor, battery, ice chest, fishing tackle and fishing poles and, sometimes, a small outboard motor.

There’s a 10- to 15-foot deep pipeline that crosses the length of the middle of the lake, which averages about 5 feet deep. That pipeline gets a lot of Domengeaux’s attention when he’s hunting bream and chinquapin.

“The whole pipeline’s good. You have a lot of good grass, hydrilla,” he said.

When the water starts warming and the spawn starts to play out, he believes the fish move out into the middle of the lake, homing in on grass beds. He moves with them to put fish in the boat in early June.

Live cypress trees dot the lake and offer more fishing spots. Many fishermen believe those cypress trees increase the odds of putting the panfish in the ice chest.