No matter where you bass fish in Louisiana, from the largest reservoir to rivers and natural lakes, bass follow traditional patterns in the spring. Knowing them helps you catch more fish.

When water temperatures begin to rise, the fish move shallow to spawn. They are usually easy to pinpoint around shallow banks, grass beds, boat docks and trees. It’s like a party for bass fishermen who don’t have to search as hard to get on the fish. But when the spawn ends, many fishermen tend to have a harder time catching them. That doesn’t have to be the case.

Nine times out of 10, after the spawn, bass retrace the path that brought them into shallow water. They return to the areas where they staged before the spawn and hold there. These are places like the edge of a feeder creek, a stump row or a drop-off with a noticeable change in water depth near the spawning grounds.

Bass are usually tough to catch when they first make that move, even if you locate them. They are tired from the spawn and in rough shape. But within a week or so, they recover and start looking for something to eat. That’s when the after party starts. 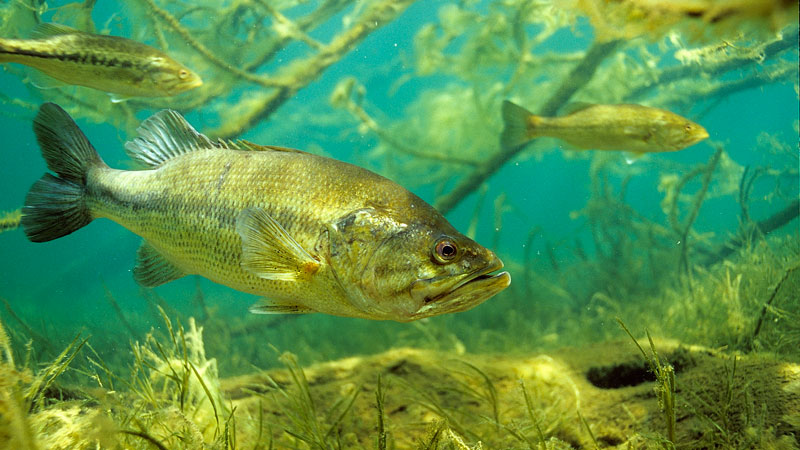 If there are baitfish in those staging areas, they’ll stay there. If not, they will be on the move looking for shad, crawfish, bream or other food sources. That doesn’t always mean going deeper. Sometimes that means moving back up in the shallows, especially early and late in the day.

“That is one thing that fishermen sometimes overlook,” said bass pro Brett Preuett of Monroe. “Even after the spawn, I usually start out back in the shallow trees, grass beds or boat docks where the fish have spawned. They will go back in there to feed, especially early.”

Preuett also says that is a good time to go topwater for the bass, even though most people still fish creature baits, jigs or other bottom bumping lures.

“I love a buzzbait like the Boo-Yah Buzz Blade or a Creme Frisky Frog for postspawn bass,” he says. “Another top bait is the Rat-L-Trap StutterStep 4.0. That’s the smaller one. They’ll eat it up.”

When the fish move off from the shallows, Preuett said to concentrate on a secondary drop and cover in that area such as a grass bed, an old ditch with a little deeper water or stumps around the bends of the creeks and humps. Again, that’s the same places the fish would have stopped on the way in to spawn.

When they are there, he likes to use a worm like the 8-inch Creme Scoundrel or other big worm.

Find this and you’re golden

“Again, you just have to imagine where the fish were on their way in to spawn and fish those same spots,” he says. “Here’s the deal, too. All the fish don’t spawn at the same time. Sometimes you can catch prespawn and postspawn fish in the same spots. Honestly, if you can find one of those holding areas where the fish move back out to the edge of a creek or drop-off and be one of the first ones to find them, you can really whack them this time of year.”

Preuett said fish on bigger bodies of water move more because, obviously, they have more choices, but they won’t go any further than they have to in order to find food. On rivers and natural lakes, the fish may not move that far, but instead of being on scattered cover, they look for something thick.

“I think that’s a real key to postspawn fish, too,” he said. “If there isn’t a lot of deeper water or noticeable depth change like creeks or ditches, just look for fish in the thickest cover you can find. That’s where they will head after the spawn.”

Where do you fish?

On reservoirs like Toledo Bend, Caney and Claiborne, the fish are more likely to head back down creek channels and look for holding areas where there are shad and other baitfish. If there is deeper grass in those areas, fish love to hang out there. On areas like the Red River and the Ouachita River, the fish will not leave the shallows as long as there is baitfish in the area. But when the bait moves, they move with it. That is usually out to the mouths of the small lakes or to the edges of cuts near the main channel. Or, as Preuett reminds us, to the thickest cover around.

“Instead of roaming around in the shallows where there might not be much cover, after the spawn, they will look for thick tops, laydowns and thicker bunches of trees or grass. It may be in the same canal or lake,” he said. “They are more interested in being in a protected area, but it still has to have a good food source.” 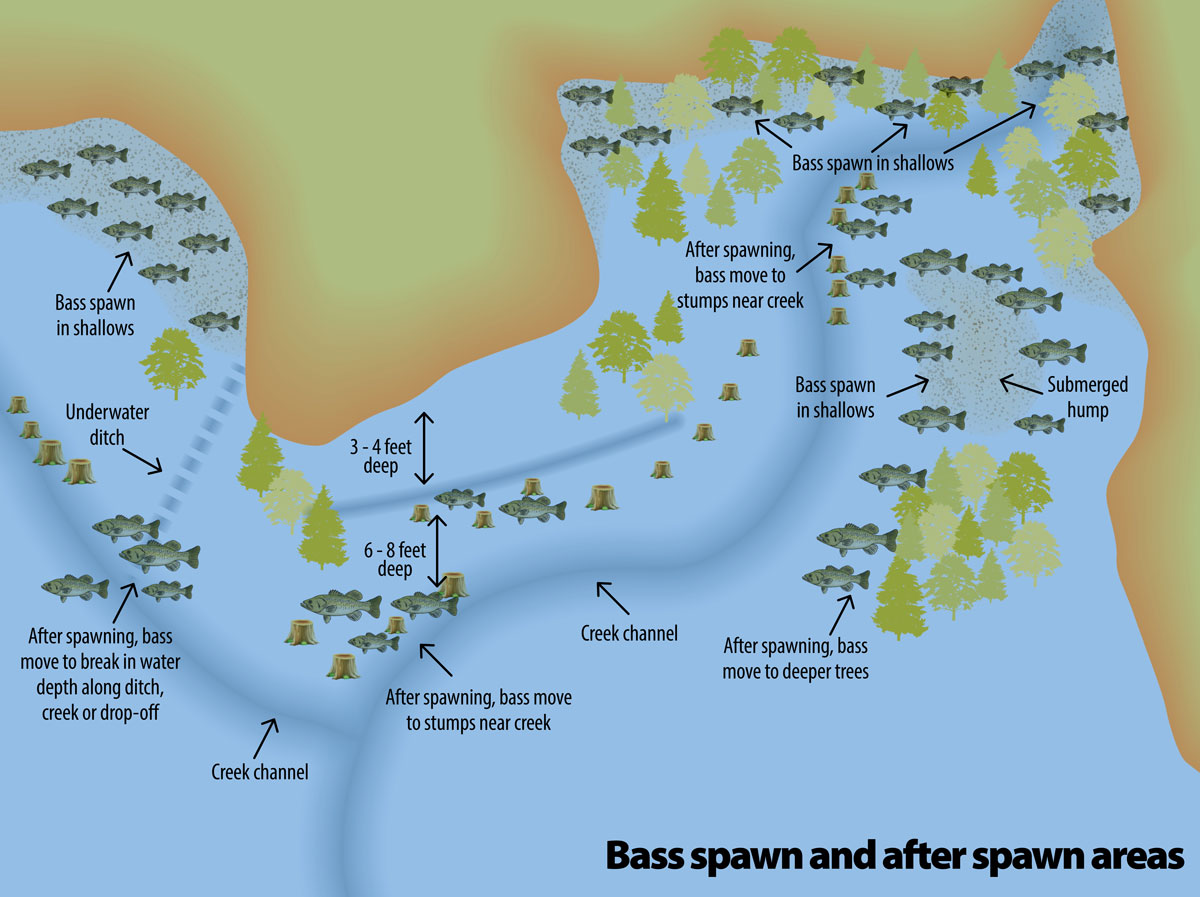 Preuett said not to discount boathouses, fishing piers and other man-made cover either. That is especially true for those that reach a little deeper water.

“Fish will suspend around the pilings and crossbeams of boat houses and piers that go out into 6 to 10 feet of water. There aren’t many boathouses or piers that don’t have a bunch of tops and other cover scattered around them, either. That’s because the people that live there like to fish off them without having to put the boat in the water. Bass have cover there, and it enables them to find food in the shallows without going far,” he says.

The main thing you have to do is spend some time on the water and see where the fish are, as well as what they’ll hit. Pay attention to what you are seeing, especially in relation to baitfish popping on the surface or showing up on your electronics. The fish will be close to the food. Year in and year out, the patterns don’t usually change a lot, so keep up with what you did for success at the same time on the same body of water last year. It will pay dividends.

Obviously you don’t catch as many real lunkers after the spawn because the big females have left their eggs behind and the males have been busy protecting the homestead. But that doesn’t mean you can’t still catch some big ones. And Preuett said the postspawn bite is easier in some ways because the fish are hungry and they aren’t as picky. Makes sense.

“Postspawn doesn’t have to mean the party is over,” Preuett said. “You just have to change tactics and keep an open mind.”

Brett Preuett qualified for the Bassmaster Classic as a champion on the college tour while a member of the University of Louisiana-Monroe team. He took advantage of that opportunity and is currently a full-time touring pro. Preuett, 28, from Monroe, has fished in 37 BASS tournaments and placed in the money 13 times.

Preuett was headed to college as a scholarship baseball player when a freak accident caused him to lose sight in one eye. He turned that competitive spirit and work ethic towards fishing and, well, the rest is history.

First bass sets us on a path to ruin; and off to the store for more lures!

No dyed-in-the-wool bass fisherman ever tells anyone — certainly not his significant other — about how much they spend on the pursuit of bass. […]

About Kinny Haddox 492 Articles
Kinny Haddox has been writing magazine and newspaper articles about the outdoors in Louisiana for 45 years. He publishes a daily website, lakedarbonnelife.com and is a member of the Louisiana Chapter of the Outdoor Legends Hall of Fame. He and his wife, DiAnne, live in West Monroe.