In the past if the Mississippi River was above 7 feet in New Orleans, Shaun St Pierre of Grand Point would be wary of bass fishing in Venice. But St. Pierre said these concerns are in the past, and his fishing club is only concerned with one thing these days; the river’s stability.

Out of the ordinary

“We annually make trips to Venice and look for stability in the river,” St Pierre said. “It doesn’t have to be 4 or 7 feet in New Orleans. In the past, we used to pay attention to it a lot, wanting to see the river at 4 feet to go fishing.”

This is no longer the case, however, and according to St. Pierre, the change may have something to do with the decline in the roseau cane surrounding the channels and bayous (See Louisiana’s Roseau Cane: Why it’s important and what’s eating it away).

“In the past, we felt like if we would go to Venice and the river’s 10 feet, then there was so much water in the cane that, unless you had a good tide pull down hard, you wouldn’t catch them,” St Pierre said.

That has all changed recently, however, as a group from St  Pierre’s club in Grand Point went to Venice when the river was nearly 12 feet and smashed the bass, St Pierre said.

“Part of that has to do with the fact that the structure has changed in Venice; they don’t have a lot of cane like they used to. Basically, the cane was on shelves. They had a shelf of cane (in the water) and go up a little bit to another bank with some more cane. Now it’s kind of changed; water’s in the cane, the tide falls and water is out of the cane.”

St Pierre said he caught bass off of the bank, which seemed to be out of the ordinary for Venice.

“The general (technique) is flipping cane with heavy tackle. We expected to punch cane and lilies, but we ended up catching them suckers off of the bank in 11 or 12 feet of water using (wacky rigged) worms, which is not typical.” 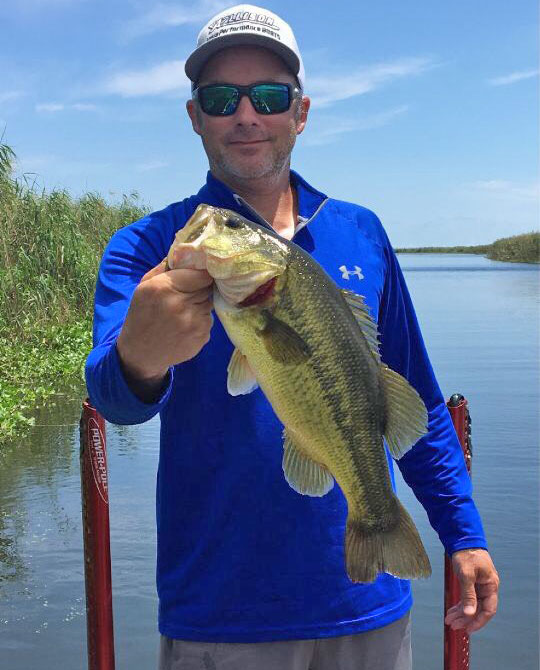 According to St Pierre, this change signals that when the river is high, it’s fine to go fishing. For him, fishing in Venice is now dependent on the river’s height being stable.

“When the river started falling and got to 14 or 15 feet, people were going and catching them in the ponds with spinnerbaits and speed worms,” he said. “When it got down to 10 feet, the grass in the ponds was so healthy that the ponds choked up and the fish escaped into the main passes, which is mostly cane fishing.”

Pierre was using wacky rigged worms without a weight in deep water in the main canals around the Delta Duck and Pass-a-Loutre, which is unusual. He said that the bass will be out of the ponds in October and should be in transition from the main canals to the larger bayous and waterways. He said finding moving water around points is a good way to find bass ganged up, as long as there is clean water.

“Years ago, we used to look for pretty good tides, provided more water goes out than what comes in,” he said. “So, whatever went into the cane would come out of the cane, and the fish would position themselves on the outside of the cane. That was the general thesis years ago,” St Pierre said. “Today, I have found that you don’t really want those big tides. It’s too much water movement, it’s too much time for the water to clear up.

The tide begins moving earlier farther south, so St Pierre likes to start near Southwest Pass at Joseph Bayou on the high tide. He moves to Pass-a-Loutre and then to Delta Duck once low tide hits in Pass-a-Loutre. He speculates that the bass fishing is better on an outgoing tide due to the movement of bait out of the small channels and cane patches into the main waterways.

St Pierre said that, even though fishermen are catching plenty of bass, they have been smaller than normal for Venice. This could be due to a prolific spawn and lower-than-average landings over the spring and summer.

“The river has been off-limits; (it) has been so high that the general thesis is you don’t go down there when the river is 17 feet,” St Pierre said. “There’s a lot of young pound-and-a-half bass; the 3- and 4-pounders are very scarce.”

St Pierre’s club goes to Venice for its annual tournament where, according to St Pierre, a common stringer tipped the scale at 14 to 15 pounds, while an exceptional stringer was 17 to 18 pounds. This year, however, the tournament was won with a 14-pound stringer from the Joseph Bayou area, while many of the other boats had 9-pound stringers — very uncommon for Venice, according to Pierre.

“It could be that the smaller fish are actually eating, and the bigger fish are not eating as much. Years ago, in False River, they had so many 12-inch fish that the fish in the slot couldn’t even get out of it, because the food was being (eaten) by the small fish,” St Pierre said.

When targeting bass in Venice this fall, anglers should know that the river has changed in more ways than just the fishing. St Pierre knows multiple people who have run onto sandbars in the river itself, near the first spillway upriver, and he stays away from certain areas due to heavy silt deposits, including the Wagon Wheel, Baptiste Collette and a recent dredge project downriver around Southwest Pass. He sticks to areas like south Pass-a-Loutre and the Delta Duck area, where he said the bass fishing should be good in the deeper channels, provided no large storms hit the area.

St Pierre uses rodnreeltides.com for his tidal information, which can also be found on LouisianaSportsman.com under the weather tab.