Lake Fausse Pointe’s reputation for giving up quality bass in late winter and spring ratcheted up many notches in 2020, with eight bass weighing more than 7 pounds caught and released, including six fish that weighed more than 8 pounds.

It was a spring/early summer big bass bonanza like no other.

The streak started in February and ended in May, which coincides with the time frame so many people know as the bass spawn at Fausse Pointe, a 17,000-acre lake system in Iberia and St. Martin parishes.

The parade began with an 8.17-pounder reeled in Feb. 15 by Joseph Martin of Baton Rouge and ended four months later with the biggest catch of the spring, a 9.21-pound bass boated by Wesley Verret Jr. of Lillian, Ala., a native of Jeanerette, on May 16.

February marked the beginning of the surge with two bragging-size bass. Four hawgs were boated in March, apparently the prime time, and two more big ’uns were caught in May.

Of the proud bass anglers who caught them, four were locals, including a 17-year-old Andre Weber, a high-school student from Jeanerette who doubled his pleasure by hoisting two fish weighing more than 7 pounds in a four-day period: a 7.25-pound fish on March 19 and an 8.5-pound fish on March 22.

The second-biggest bass of the streak was caught by a local, Dustin Dore of New Iberia, who was fishing on Feb. 25  when he got his hands on an 8.99-pounder.

New Iberian Bo Amy’s 7.20-pounder on March 8, and New Iberian Jarrod Derouen’s bass, which had a spring scale teetering between 8½ and 9 pounds, were the others lifted into the boat by local bass anglers.

Three out-of-towners, including Martin, who kicked it all off in mid-February, joined in the big-bass hit parade. The other visitors were Travis Meche Sr., of Branch, responsible for an 8.82-pounder on May 2; Martin, and Verret.

The news spread fast with each hookset on a lake that fished smaller than usual because of low, muddy water conditions from early spring to early summer.

Only two of the Great 8 came from Sandy Cove, an area lined with cypress trees that’s one of the lake’s better-known spawning areas. Meche, 31, and Dore, 35, both slammed the steel home to their big bass there.

Verret, 39, a Navy veteran who grew up fishing Fausse Pointe before moving to Alabama in 2017, was fishing with his father and father-in-law when he caught the biggest bass of his life and the lake’s biggest bass for 2020. 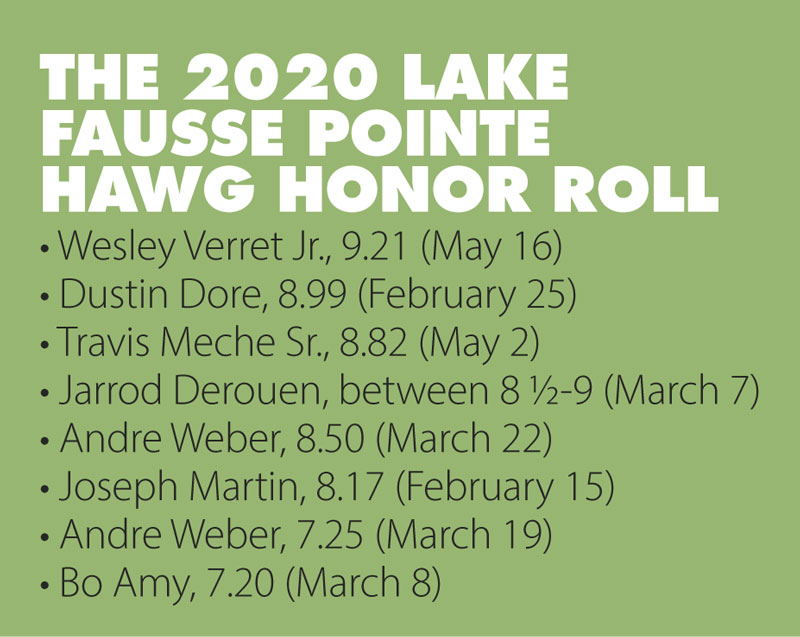 Before that big girl got hungry, Verret had 4-pound and 5-pound bass in the boat on a black/green H20 Popping Frog. He was fishing it slowly, deliberately, when the bass moved under it and sucked it in. She gave the 60-pound braid a workout with runs that tangled line around cypress knees, but teamwork with his fishing buddies resulted in a good grab and celebration.

“I think everybody was speechless for about 15 seconds,” Verret said, describing a bass 24 inches long with a 16-inch girth that capped the wild run that was hard to beat anywhere not named Toledo Bend.

Martin, 23, started it while scouting for a Fishers of Men tournament with a fishing buddy in Texaco Field. He made an extra-long cast past wooden structure in an oilfield canal and felt the chartreuse/blue Strike King KVD 1.5 crankbait he was throwing get heavy. The rest is history.

“When we got it in the boat, we started hollering,” Martin said.

March roared in like a lion for Amy, 33, who was fishing with Mike Segura of Broussard. They had boated several nice bass before making their third move, then Amy scored his biggest-ever Fausse Pointe bass on an Okeechobee-colored Reaction Innovations Sweet Beaver.

“In the lake, you don’t catch many fish like that,” Amy said. “You really don’t see many big fish in the lake.”

Dore was alone on the water on Fat Tuesday when he caught his fat bass, the biggest of his life. He cast a junebug-colored Gambler Big Easy swimbait toward a clump of tall reeds just before 11 a.m. The bass bit, lost the ensuing battle and wound up in his hands.

“I had to sit down and take a break for a while. You cannot not get an adrenalin rush after catching one that size. You always hope for it and dream about it and hope it comes true. It was an awesome day, for sure,” he said.

Derouen, 35, who has a 35-pound redfish and 5½-pound speckled trout to his credit, pulled in his big bass while fishing with a friend, Troy Laviolette. In the first moments after the 8.17-pounder inhaled the junebug-colored Baby Brush Hog he was flipping, he thought it was a 5- or 6-pounder but was glad he was wrong.

“Oh, it’s awesome, definitely the fish of a lifetime, for sure. It feels great. I’ve been trying for a long time to catch one that big,” he said.

Weber had two days of heavenly fishing for big bass. He was by himself when he boated the 7.25-pounder on a spinnerbait but couldn’t get a good photo of it after weighing it while videoing with his cell phone, which upset him, but he was more than pumped to get the 8.50-pounder and for his grandfather to take plenty of photos. His biggest fish hit a black/blue, 3/8-ounce Strike King Hack Attack jig.

“Ah, it’s unbelievable. I’ve been fishing my whole life. I’ve never caught one over 5 pounds. All of a sudden, in one month I start catching big ones,” Weber said, noting that in early March, he reeled in a 5½-pounder in Sandy Cove.

Meche and his young son, Travis Jr., were out on May 2 with his father, Neal. His offering of a 3/8-ounce, crawfish-colored Strike King jig was rewarded with the bite of a lifetime, an 8.82-pounder.

“I ain’t ever caught a big one like that. Hell, no. My little boy thought it was a big goo,” Meche said.