Clark Reehm of Elm Grove, a veteran pro bass angler, hates to slow down while fishing tournaments, which explains why he hates to fish with the soft-plastic bait that he uses to catch bass consistently when the money’s on the line, particularly in March.

Say what? You read it right.

“Man, I hate to say this and admit it. It is hard to say. It’s a 5-inch Senko. I hate throwing it, but I like cashing checks. It’s always on the deck of my boat. I’ll have one rigged up every single tournament this year,” Reehm said.

That’s the gospel truth, and what’s more, Reehm admitted candidly, he isn’t sponsored by Gary Yamamoto Custom Baits, which manufactures the Senko. It isn’t his go-to bait in March; it’s his must-have bait.

Reehm, 40, said he saw the handwriting on the wall years ago after an exchange on the water with an accomplished bass pro. The other angler chided Reehm for mocking his reliance on a Senko and pointed out that he had caught all but three bass he weighed that year on Senkos.

Reehm got the message and became a believer. He’ll throw a Senko on his Dobyns 703 Fury spinning combination any time of the year, but especially in March.

“I didn’t like slowing down, but this time of year you have to slow down,” he said.

The results impress him, which explains why he consistently fishes a Senko.

“I go by percentages,” he said. “The more bites I get, the more fish I catch. I absolutely get more bites. If I can get 30 bites throwing one thing and catch the same caliber fish.” 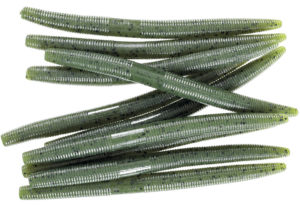 That’s the advantage he wants.

A history with the bait

Reehm — who fished the Bassmaster Elite Series for six years, qualifying for two Bassmaster Classics, before fishing the FLW Tour the past six years, qualifying for three FLW Cups — has always liked Senkos. He remembers as a boy hooking Senkos on a gold Aberdeen hook in the middle of the egg sack or in the nose and catching plenty of bass. It was “wacky worming” in its earliest stages — a presentation that evolved into a special technique.

Reehm often rigs a Senko wacky-style with a penny nail in the nose. He skips it deftly under docks and other structures.

Reehm, who once fished a Beetle Spin on 6-pound test line to finish in the Top 10 of a Bassmaster Open even, ties a 1/0 Gamakatsu Split Shot Dropshot hook to a 3-foot leader of 12-pound fluorocarbon, which he ties with a Double Uni knot to 20-pound braid on his reel. He has no qualms about using the Double Uni knot because, he said, it doesn’t break if you lean back on the hookset and don’t slam it home.

“The biggest thing is, all you have to do is lean, and the hook’s thin enough and sharp enough, you rarely lose a fish,” he said. “I do not horse fish. You know, I’ve got the lighter setup. When you use a spinning rod, you learn how to land a fish without horsing it.”