At the 2019 Bassmaster Classic, John Crews, owner and president of Missile Baits, unveiled a soft plastic that has been an unqualified success. The Ned Bomb took the finesse fishing game to another level.

At last month’s Bassmaster Classic on Alabama’s Lake Guntersville, Crews and his staff from Salem, Va., introduced another new soft plastic, this one designed specifically to be fished on a Neko Rig or Tokyo Rig; the latter can be punched effectively and also triggers bites when pitched around cypress trees and cypress knees across the South.

Crews, the 41-year-old bass pro and founder of Missile Baits, was excited about launching the Quiver, which will be available in 4 1/2- and 6 1/2-inch models. The new bait was born out of necessity, according to Crews, who fishes on the Bassmaster Elite Series circuit and finished sixth in this year’s Classic.

“About halfway through the year last year, I went through like three tournaments in a row where I caught all my fish on a Neko Rig,” said Crews, who started using a Neko rig in 2016. “I was using other brands. It dawned on me I wanted a thicker-bodied worm so the hook stays in it and a little thin tail to give it action. I wanted a head with a flat spot on it to be able to insert the weight.”

He got right on that task.

“I drew it up in the fall, probably September,” he said. 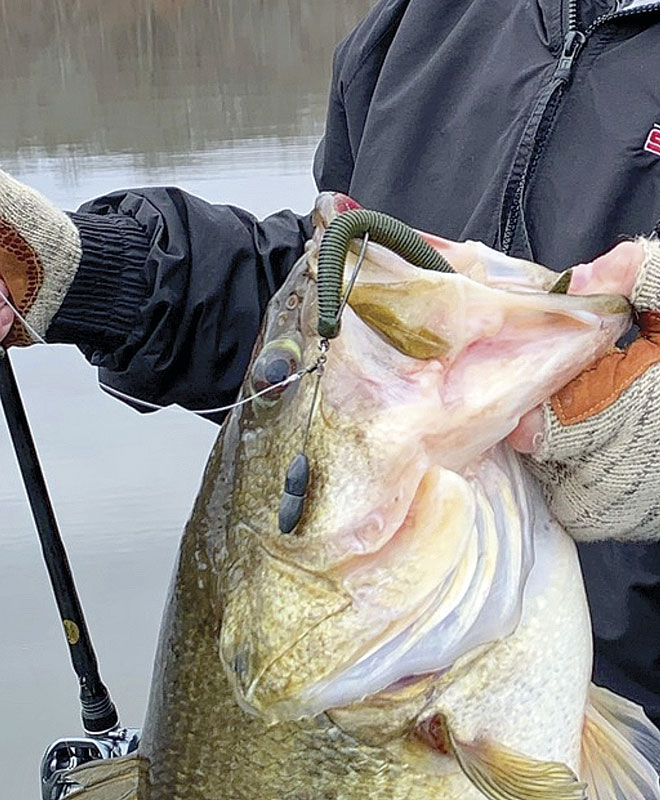 Getting it just right

Crews knew what dimensions he wanted and relayed them to the professional who has crafted the molds for 10 previous Missile Baits products.

“I nailed it right off the bat,” he said. “I basically took the head of the Ned Bomb and used it on both Quivers because I knew the size and shape of the head I wanted.”

The result pleased him.

“I didn’t know what to expect when I did the Ned Bomb. I thought it’d be pretty good, and we sold a ton of them. I think this bait has got the same potential,” he said, noting it should catch “a ton of bass” mainly using two techniques.

“They (Quivers) look amazing underwater. It’s an ideal bait for the Neko Rig and the Tokyo Rig.

Crews and some anglers in the office have been catching bass on the Quiver for a while, he said, noting one of them caught five bass on one of the soft plastics and still has it tied on, proof of its durability.

As for using a Tokyo-rigged Quiver around cypress trees, which are common bass habitat in Louisiana and across the South, Crews suggested using two 1/8-ounce worm weights that will clack together and “to just pitch it around cypress knees and hold on.”

Quivers will be available in 10 colors with many options, he said, adding there will be single colors, core colors, laminated and triple laminated.