The area near Gibson, below Bob’s Bayou Black Marina, is a familiar piece of marsh that year-in and year-out is a go-to location for bass anglers. The Bluebird Canal, 70 Mile Canal and the Orange Grove areas along the Intracoastal Waterway have, at one time or another, given up winning tournament stringers of largemouths. What’s more, March is the time to be there to put some weight in your livewell.

Gerald Foulcard of Patterson, president of Bullet Bass Club in St. Mary Parish, is an angler who has caught his share of bass in this region, particularly during March.

“What makes those locations hot spots is the water is usually clearer than most other places around the area,” Foulcard said. “Therefore, any sunlight can warm the water quickly. We all know, when the water is warm it triggers the fish to start migrating to the points of potential spawning bayous and canals such as Bluebird and 70 Mile.”

Though the 70 Mile and Bluebird canals are close to each other, Foulcard said their makeup is different. There is lots of hydrilla in the Bluebird Canal, while 70 Mile features reeds and rouseau cane

“In Bluebird, you’ll quite often have small pockets of open water between the hydrilla and the bank to fish,” Foulcard said. “In 70 Mile, you’re flipping roseaus and reeds. But for both canals, you’ll want to concentrate on points at the end of February. Going into March, fish will migrate to the middle and back of the canals looking for that 62- to 65-degree water to start laying eggs.”

“My confidence baits for Bluebird are Senkos in blue laminate or junebug fished both wacky or Texas-style,” he said. “In 70 Mile, I’ll flip the roseaus and reeds with Speed Craws, and sometimes I’ll toss a lipless crankbait. They work well. It’s sometimes trial-and-error, but the key is to use your confidence baits.”

During the spawn, Foulcard has had success with square-billed Catch 5 Lures in a color called “jolt.” He said you can never leave out a 6- or 8-inch lizard in your confidence color. His preferred colors are junebug or junebug/red.

Matt McCorkle of Houma grew up fishing the Orange Grove and both Bluebird and 70 Mile canals. After learning the area and fishing there for more than 15 years, he feels it’s almost post-spawn by March in this area.

“I find it’s not so much a reaction bite they’re looking for as it is, they’re looking for something to eat after the spawn,” McCorkle said. “There’s been many, many times I’ve gone there with Senkos — with watermelon red being my best color — and just fish anywhere around grass, and that seems to be what they want.” 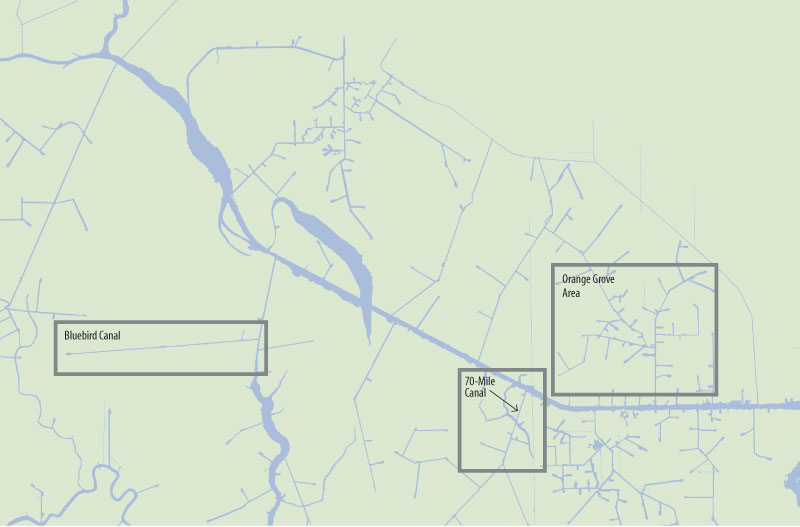 The Orange Grove, Bluebird and 70 Mile canals see a lot of pressure from both Terrebonne and St. Mary Parish anglers, but they are known to produce consistently.

“I’ve seen some beautiful fish come out of those areas,” McCorkle said. “I’ve gone and struck out before, but it’s always been an area you could put together a decent bag of fish.”