A veteran angler from the Bassmaster Opens pro circuit knows where the “early bird” can get the bass near his Gonzales home during the month of May. And he’s glad to share.

The key words are “early” and “bird” when Logan Latuso goes to Lake Verret, a lake he has been fishing since he was a boy. He began fishing there with his father, former Bassmaster Elite Series angler Robbie Latuso, also of Gonzales.

“In May, I really like Lake Verret because the shad spawn starts in May,” the younger Latuso said. “It’s some of the funnest bites you’ll get all year.”

Unlike others in the region, Latuso generally writes off the Bayou Black area and stays clear of the Atchafalaya Basin, which often is unfishable due to high water.

Lake Verret fits the bill for catching bass now. Latuso details his approach to putting bass in the boat.

“The biggest thing is to keep an eye out for birds,” he said. “I ride around till I find the birds. Find birds and you find shad. If they’ve got a bird on point, in a tree or on a laydown, they’ll have shad there. If you see a cypress tree with three or four birds, there are a lot of shad.”

What also makes May bass fishing so productive in and around Lake Verret, he said, is that this time of year bream are spawning, too. In other words, bass can snack on as many shad as they want early, then gulp down a full meal later by inhaling a bream.

How early is early enough?

The key to catching Lake Verret’s bass is getting your lure wet at or just before sunrise.

“The earlier you get out there the better,” Latuso said. “It’s a morning bite. Shad spawn overnight. The first couple hours of the morning if you’re on the right stretch you can catch a lot and big bass. They’ll be in a mile-long stretch or be in a 100- to 200-yard stretch. You’ll know you’re around them. You’ll see shad everywhere. Bass are spittin’ up shad (after you catch them). You can even feel shad ticking the spinnerbait, biting the blade.”

Shad hang around anything green in the water, from the leaves of a cypress tree or deadfall or lily pads, he said. He’ll also target bass around docks and bulkheads in the Shell Beach area of Lake Verret.

The bite doesn’t last throughout the morning, however. Then it’s time to switch tactics. 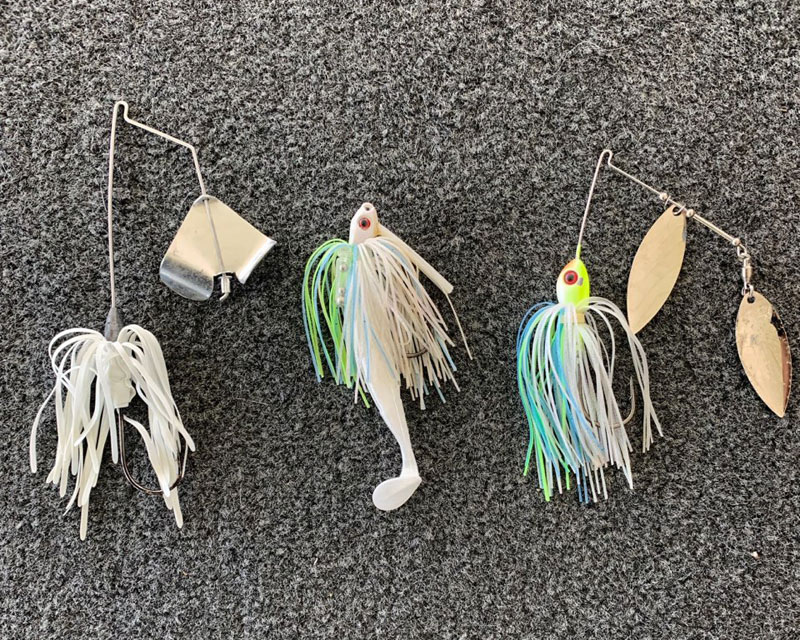 Latuso, 28, who assists with fire and water mitigation for his dad’s company, ServiceMaster Restoration & Cleaning Specialists, has a game plan that works at Lake Verret on a windy day and a different one that triggers bites on a calm day.

However, he said, “The No. 1 bait I always start with is a ¼-ounce Delta Lures buzz bait with a silver blade and a white skirt.”

He prefers that model and profile because the shad are pretty small.

Another artificial lure to keep tied on, ready to swing into action, is a Black Label Ricochet Jr. crankbait made by bass pro Cliff Pace of Petal, Mississippi. He likes to bounce the squarebill off cypress trees and knees to ignite reaction bites.

Where does one go to find bass this month in the huge, cypress tree-lined lake north of Grassy Lake? North? South? East? West?

“I like the east side more. They’re coming out of The Crackerhead, leaving those spawning canals,” he said, noting when they do they’ll come out eating, so those cypress trees in that northeast part of the lake usually pay off.