The Butler did it — with an assist from his friends.

Ethan Butler, who grew up fishing ponds in Iowa, was fresh out of college in July 2019 when he joined an all-star team charged with reintroducing the Arbogast Jointed Jitterbug, a legendary topwater that dates to 1937. Butler, Frank Scalish, Bill Jarboe and Chad Warner modernized it while keeping the same attributes that made the gurgling, wobbling topwater famous for so long.

Butler was working for PRADCO Outdoor Brands, based in Fort Smith, Ark., when he got the word to launch the Arbogast Jointed Jitterbug 2.0. PRADCO had introduced the Hula Popper 2.0 a few months earlier, even arranging to get them into monthly Mystery Tackle Boxes.

“That was a great idea to get Arbogast in the hands of some young anglers, essentially make it cool again in the eyes of younger kids,” Butler said.

The Jointed Jitterbug 2.0 was a tweak like no other, apparently.

“It works as good, if not better, than the original Jitterbug,” he said. “It might look drastically different, but deep down, under the hood, it has got the same action.” 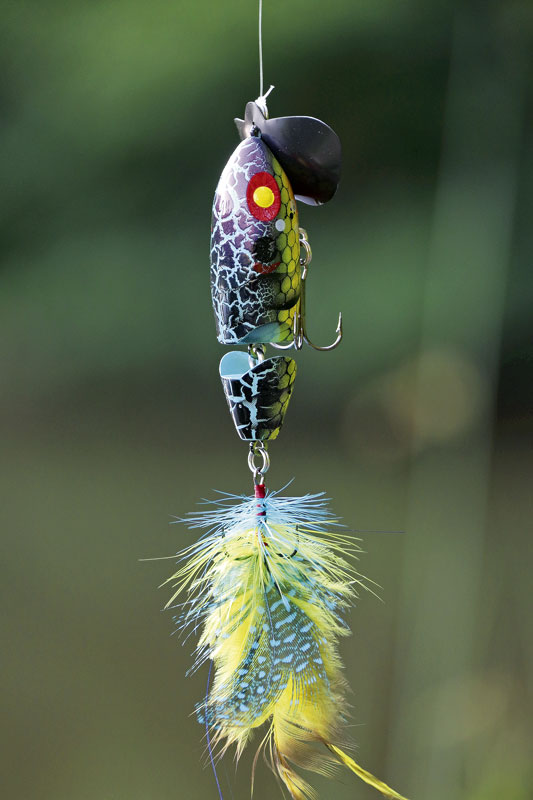 The Jitterbug’s reputation as a go-to artificial lure from generation to generation hardly intimidated Butler as he shaped the new model for the 2020s.

“I don’t know if intimidation is the right word, but it was scary,” Butler said.
Warner, PRADCO product manager as well as an avid bass tournament angler, coordinated the project, Butler said, helping with the sourcing after sitting down with the others and bouncing ideas back and forth.

Jarboe, the company’s award-winning product development engineer, came up with perhaps the most-integral part of the new design, according to Butler. He lowered the “pull point” to maximize the sound and action that made its predecessor so popular.

It took an estimated four prototypes, a couple different types of feathers and 5 months to get what they wanted. Jarboe knew it looked good, but he emphasized making the action top priority.

PRADCO teased the fishing public before its arrival, so some people knew it was coming when the 2½-inch, 3/8-ounce Jointed Jitterbug 2.0 armed with No. 6 treble hooks hit the market last summer. The feedback after its release was rewarding and overwhelming.

“There’s some big differences in the Jitterbug from the new one to the old one,” Butler said. “Obviously, it’s got a black-nickel anodized lip. I like that. I think adding the black lip was a piece of the puzzle to make the new generation of Jitterbugs great.

“And there are no ‘hook hangars.’ It’s got free-swinging hooks that ought to increase the ratio of hookups and minimize the chance of losing a hooked fish as well.”

Unlike the original, it also has a rattle inside.

Butler, 25, believes anglers will be dazzled by the “awesome” color scheme, the intricate paint job PRADCO calls special “crackle” colors on the Jointed Jitterbug 2.0. The “crackle” look is created by a paint-drying process, he said. The new version comes in the same colors as the new Hula Popper 2.0 — coach dog, black death, blue kill and white zombie.

Butler said the crowning moment for him was during a photo shoot to film a promo on the water.

“After five minutes, there was a’ toilet flush’ (a bass engulfing the Jointed Jitterbug 2.0). It hit me that we had something special,” he said.

“I was fortunate to have an input in the design of the Jitterbug. It’s kind of crazy. Talk about a cool project, just getting out of college and working on a project with Arbogast, launching such an iconic product, first the Hula Popper and then the Jitterbug.”

For more information about the Arbogast Jitterbug 2.0 and other PRADCO products, visit www.pradcooutdoorbrands.com or call 800-531-1202.

Bass get aggressive this month at Toledo Bend

Bass are going to be aggressive in November, so it’s a fun time to throw whatever bait you like. The more water you cover, the better. […]