While he fishes in heavily pressured waters in March, especially at or around the height of the spawn, bass pro Greg Hackney of Gonzales catches more bass than others. Other bass anglers can have that kind of success, he said, if they fish with one of his favorite soft plastics, the Strike King Ocho.

“You can make people think you’re using live bait. It’s a great way during the spawn to catch fish. I’ve been catching on it forever. It’ll be good this year, next year and forever,” said Hackney, who is fishing the Major League Fishing pro tour.

Hackney fishes the Ocho from late February to early April, as well as other times throughout the year. An Ocho is a Senko-style, soft-plastic stickbait that, according to Strike King, boasts an exclusive blend of ingredients that make it the softest, saltiest on the market. Plus, it has Coffee Scent, exclusive technology that masks human scent and attracts fish, and its shape is unique.

“They call it the Ocho because it has eight sides, which, honestly, gives it a hair more action,” he said.

Hackney said bedding fish will strike an Ocho. He targets those bass and any others with a three-pronged attack.

“It’s really, really good on the spawn. It generates bites when most people are throwing creature,” he said. “It gives you the opportunity to finesse fish and power fish. Any time they move shallow, it’s a good bait. If the weather’s conducive, I start throwing it in February.” 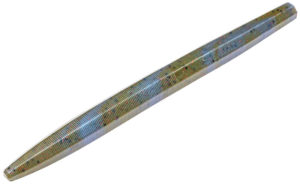 Hackney, host of Sportsman TV, throws the Ocho Texas-rigged with a 3/16- or 1/8-ounce weight, proving its effectiveness of a finesse bait while power-fishing with a 7-foot-3, Lew’s Hack Attack all-purpose rod on 16- or 20-pound Gamma flourocarbon. He’ll also throw an Ocho on the same rod, Texas-rigged but weightless, on a 4/0 or 5/0 offset worm hook on 14- or 16-pound Gamma. His favorite, however, is fishing the 4-inch version of the Ocho wacky style on a 6-foot-10 Hack Attack spinning rod, which is ideal for skipping under docks and tree limbs.

“(That) is really, really good on the spawn. Typically, there’s a lot of pressure in March,” he said.

When Hackney fishes an Ocho wacky style, he uses 15-pound braid with a 4-foot, 10- or 12-pound flourocarbon leader. He connects the two fishing lines with a Crazy Alberto knot.

“I can tie it as quickly as a blood knot; it’s much smaller and a lot more user-friendly,” said Hackney, who shared this tip for hooking the Ocho wacky style. Don’t put the hook in the middle. Place it a little toward the front, slightly past the middle, a position that gives it a little more glide, slightly accelerated.

Do the same if you use an “O” ring, which he likes because he can often catch 10 bass, or even more, on one Ocho.

“Junebug’s hard to beat because of the color of water in our area,” he said, noting in some situations he will apply chartreuse dye to the tip of any of the Ochos.