A flipper’s heaven opens up on many waterways in the winter, and a jig is the main meal ticket for waiting bass.

“Really, for me, December in our area can be good with any kind of jig,” said Greg Hackney of Gonzales, a bass pro and host of Louisiana Sportsman TV. “Typically, the vegetation thins out and places you punched earlier, you can use a jig. It starts to open up.”

Despite having to tape episodes of the television show and get ready for deer season on his leases in Mississippi and Arkansas, Hackney had flipping for bass on the docket for late November and December.

“It’s a great time of year to catch 3-pounders in our area,” he said, referring to the marshes on either side of the Atchafalaya Basin’s levees.

Hackney will be flipping a ½-ounce Strike King Hack Attack Flipping Jig that is compact and features a heavy wire, black-nickel Gamakatsu hook to deliver better penetration on the hookset. He said the 30-degree angle of the strategically placed line tie also creates a better hookup ratio than other jigs. Its head configuration, weedguard and size make it extra weedless, and its corkscrew wire keeper secures the soft plastic trailer.

It’s just what the doctor, er, Hackney, ordered. The jighead is custom-built to slip through heavy cover, he said.

“I use it whether there’s heavy cover or not. I like a ½-ounce. It fishes good in our area because we do have a lot of cover,” he said.

“Another thing about flipping a jig is it’s slow. It doesn’t go through cover as fast as plastic. You have a tendency to fish slower,” he said. “When (water temperature) gets to 60, 50 degrees is when it (really shines.” 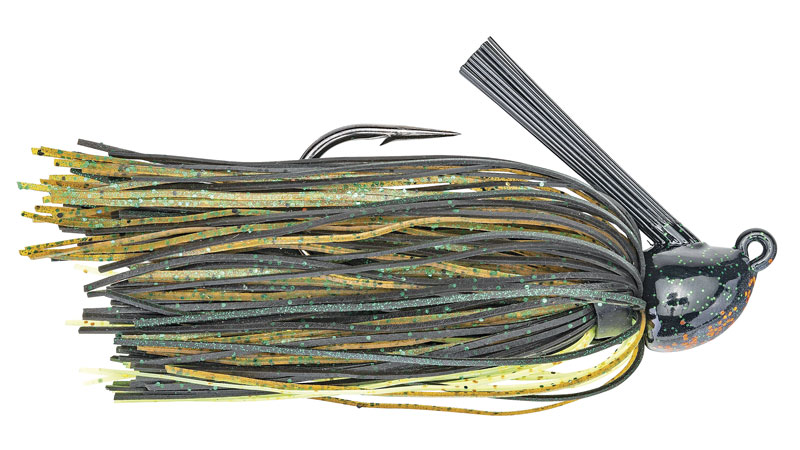 Hackney looks for the clearest water he can find when it’s colder and usually fishes shallow in the areas around his home.

“Honestly, most of the time, I have never fished deeper than 4 feet, and most of the time 2 to 3 feet. (But) sometimes, they’re in the middle of the canal, near grass,” he said.

Hackney’s favorite color combinations include a black/blue jig with a 4-inch black/blue Rage Craw, a 4-inch Sexy Craw jig with a “doubleheader” Rage Craw and a Peanut Butter Bug with a junebug Rage Craw.

Hackney does trim the skirt a little bit, which gives the silicone strands a little more life, he said, fishing it on Strike King’s Tour Grade braid, introduced at the 2019 ICAST show. He doesn’t use anything heavier than 50-pound test, however, noting that the braid\cuts through vegetation like a knife.

He flips the jig on a 71/2-foot Hack Attack Flippin Stick complemented by a Lew’s Custom Pro Reel.

Bass pro Randy Despino of Colfax likes a big worm for September bassing. He’s won a lot of money and a lot of tournaments with the V&M Wild Thang. […]

College bass fishing taking off in Louisiana, across the country

College bass fishing is taking off across the country. Louisiana has almost a dozen schools sending teams out to national competition. […]