Wesley Verret Jr.’s Alabama bass fishing tactics paid BIG dividends on a trip May 16 to Lake Fausse Pointe, the lake he grew up bass fishing, hunting and setting out hoop nets with his dad and grandfather.

Soon after hooking and boating a 4-pound bass, then a 5-pound bass while bass fishing with his father and father-in-law that memorable day, the Lillian, Ala., all-around outdoorsman and native Louisianan caught the lake’s biggest bass this spring, a 9.21-pound goliath. Verret’s bass was the first weighing more than 9 pounds and eighth pushing the scale past 7 pounds, with six of those “hawgs” being at least 8 pounds, in 2020.

It’s one he would have wanted his dad, Wesley Verret Sr. of Jeanerette, to catch because the elder Verret has had a bass like that in his sights and dreams for so many years of bassin’ in the 17,000-acre system — Lake Dauterive-Fausse Pointe — in Iberia and St. Martin parishes. That he caught it while fishing with his dad and Phillip Broussard of New Iberia made it so much more special, he said.

The 39-year-old Verret was back home visiting when the last-minute bass fishing trip was arranged for that Saturday.

“I just happened to be the guy on the end of the fishing pole,” Verret said three days later from his home in Lillian about the bass that has all of Acadiana abuzz over yet another trophy-sized bass from Lake Fausse Pointe.

Verret said he understands the happy hullabaloo around the big bass but added, modestly, “It was me catching my father’s fish, basically.”

Before that day in mid-May, his biggest bass all have weighed in the 5-pound range. He has been fishing clear, clear Alabama waters since he moved to the coastal region three years ago with his wife, Kelly.

“The water’s so clear here you h-a-v-e to fish slow, they spook so easy. Over here you have to keep the bait in the same spot,” Verret said.

That 9.21-pounder couldn’t resist the black/green H2O Popping Frog. He had switched from a popper to get the previous two bites. 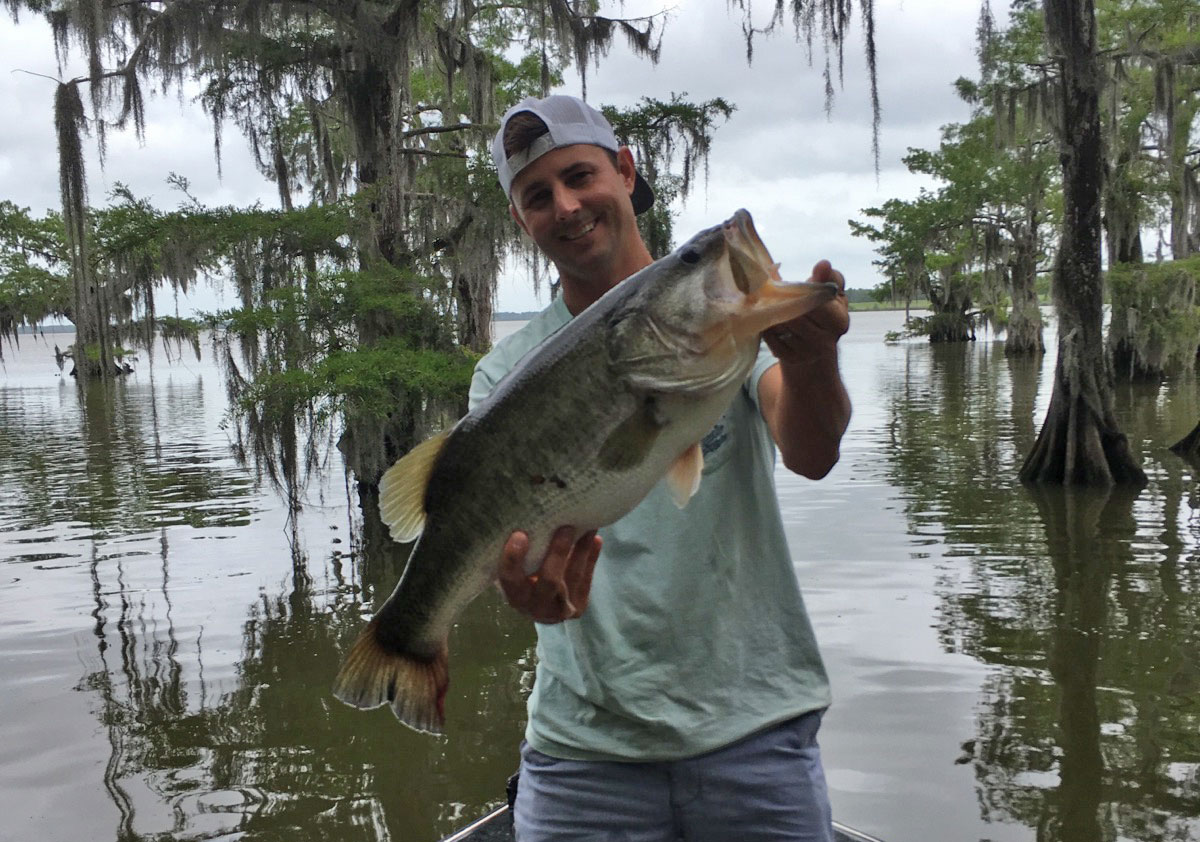 “I was basically making the frog vibrate,” he said, explaining he gently twitched it to make it shudder, then let it float there, then repeated.

“I mean, I barely moved it to make it vibrate. I actually saw the bass come out and look at it. I could just see the top of it because the water was a little stained,” he said, noting he could tell by the dark shadow it was a huge fish. “Then she took it. She swallowed it, took off and jumped three times and wrapped (the 60-pound braided line) around cypress knees.”

That was problematic for the fishermen. Fortunately, both hooks were buried in the bass’ mouth.

Verret, who was fishing in the middle of the boat, urged his dad to back the boat toward the cypress knees where the hooked bass was thrashing, drawn up tight to the cypress knees. All the while, Broussard was unwrapping braided line.

While he held the fishing rod up high, they got closer and closer.

Lip it his dad did. They all feasted their eyes on the prize.

“I think everybody was speechless for about 15 seconds,” the younger Verret said.

Then he swung into action.

“I immediately put it in the livewell. I didn’t want to hurt it. I just wanted to mount it (replica mount). I called a taxidermist to see what I needed to do to make a replica because I knew I was releasing the fish,” he said.

They needed a scale, so cranked up the boat and drove back to the boat landing on the Chitimacha Tribe of Louisiana Reservation, where they launched. On the way, they stopped at three houseboats to see if the residents had a scale. 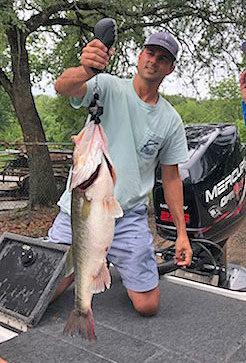 An angler at the boat landing had a scale and tape measure. The MLF-like scale bounced around and the bass slipped off three times before the weight was pegged at a light 9.21 … Verret noted it read 9.50 once.

It was 24 inches long with a girth of 18 inches. While the tail still was red, the “healthy” bass apparently had spawned.

Concerned about the large bass’ health, Verret decided against going back to the lake and releasing it. It was released alive in a pond owned by one of his father’s friends.