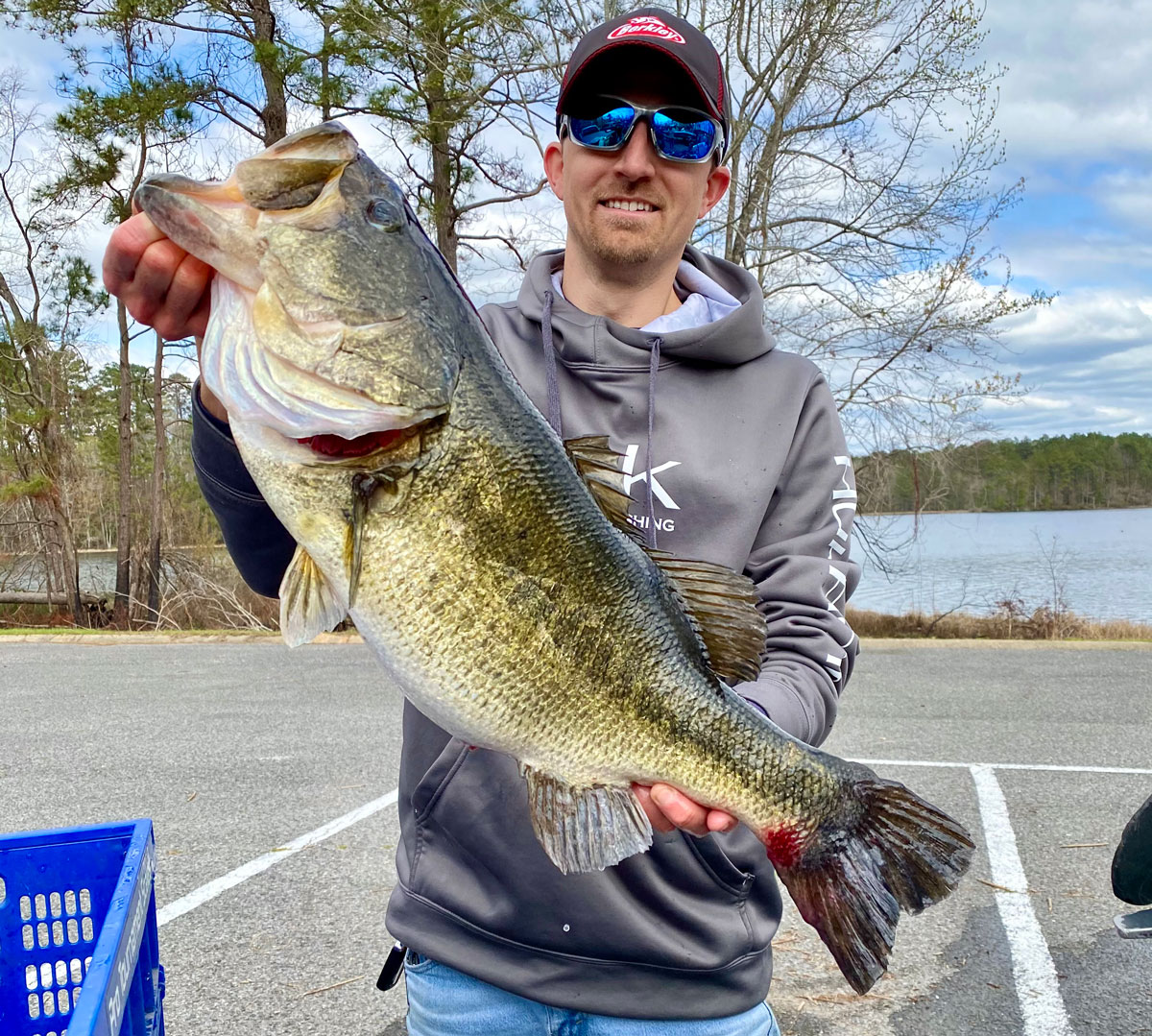 How many bass clubs can go years without having a member catch a 10-pound bass in a tournament?

How many will ever have two double-digit bass show up at the same weigh-in?

So much for sharing the prize money with anybody else.

“I kind of feel for Brice,” Hedge admitted. “He’s sitting there with a big fish, and to come in second.”

Hedge put his big fish in the boat about an hour before Jones caught his. Hedge was fishing some lily pads about mid-lake, throwing a Sluggo, in 2 1/2 feet of water, when his fish bit around 1 p.m.

“I had it over a little open spot, and she hit it when it was drifting down,” said Hedge, who was using a Shimano rod and Pflueger reel spooled with 20-pound Sufix braid. “I was just looking at that Sluggo, watching it fall, and all of the sudden, she grabbed it. I set the hook. The fight wasn’t that bad. She ran to the back of the boat, came around the front of the boat to the other side, and she just wore herself out. I finally got her to the boat and lipped her.

“There was another guy in the club sitting about 25 yards away from me, and he asked what I thought, and I said, “Maybe an 8 1/2. Then, when I got her out of the livewell (for the weigh-in), I thought, ‘She’s a lot better than that.’”

The complicating factor was that the bass was 26 1/2 inches long and 20 inches in girth. In a word, already spawned out.

“I would like to have caught her 3 weeks earlier,” Hedge said. “She was all flat-bellied, spawned out. We had a lot of warm weather the week before, and the water temperature shot up to probably 70 degrees, and they did their thing.”

The bunker wasn’t Hedge’s personal best; he caught an 11.15-pounder from Caney several years ago.

The right dock at the right time

Jones’ 10.36-pound fish was his best, and he thinks it was close to spawning but had not spawned when it was caught, despite it being 26 inches long and 19 1/2 inches in girth.

“Her tail was bloodied up on the bottom, but just looking at her, she was prespawn,” he said. “She still had her egg mass.”

Jones caught her around a dock he’d fished earlier in the day.

“I found a dock with a lot of brush, maybe five Christmas trees out front, and I was pitching under the dock and caught a 4-pounder, then another,” he said. “I went back in the creek and fished, but I knew I was going to come back and fish the dock again; I’d just caught two in 30 minutes. But when I came back, there was a guy sitting in a chair on the end of the dock, fishing, so I went back in the creek.

“I kept watching for him to leave, and when he got out of his chair, I cranked up and took off. I was approaching the dock on my trolling motor, and I just pitched down the side of the dock toward the bank — not where I really wanted to cast, but I just threw up there shallow, maybe a foot of water. When I was there before, I’d seen a tiny, tiny bass go up shallow and run some bait up there. That’s why I pitched in there. I was just blind-casting in there.”

“I just gave it one shake, and she was on it. It didn’t feel like a bass,” said Jones, who was thinking catfish or freshwater drum when the fish burst out from the dock. “She came up and was about a foot under the surface, and I didn’t see her good. I said, out loud, ‘What was that?’ When she came back up, she was on her side, and I knew it was a bass.

“She gave up real quick. I got my dip net, and she was almost too big to go in it. I draped her across the net, trying to get her in head-first, and I finally did. I put her over on the scales, and all I remember was seeing it go over 10. I put her in the livewell, picked up my phone and called my wife and told her to load up the kids and come to Caney.

Hedge and Jones showed up at the weigh-in at Jimmie Davis State Park, both figuring they had the big-fish category and first place locked up. They were half-right. The two fish were weighed on certified scales and released alive.

“I saw Mark Hedge walking down the end of the dock holding a big one,” Jones said. “I heard him yell ’10.86’ to someone, and I thought, ‘You’ve got to be kidding me. What are the chances two bass over 10 pounds get caught in the same tournament?’”