Josh Chauvin’s never been one to take the easy road.

“I like to challenge myself,” Chauvin said. “To do things the hard way, because when you do it the easy way, the reward is less significant, to me at least.”

So while many anglers would likely file sharks and alligators among the list of creatures to avoid, Chauvin takes a 180 on that idea in terms of approach.

He doesn’t run from them, but goes toward them instead — and, in fact, frequently catches them.

Such was the case recently when out on an excursion in the Bonnet Carre Spillway in Norco, when Chauvin landed a real whopper: a seven foot, 130-pound bull shark.

“We caught seven or eight of them that day, including several big ones,” said Chauvin, who pens “The Apex Predator” column for Louisiana Sportsman. 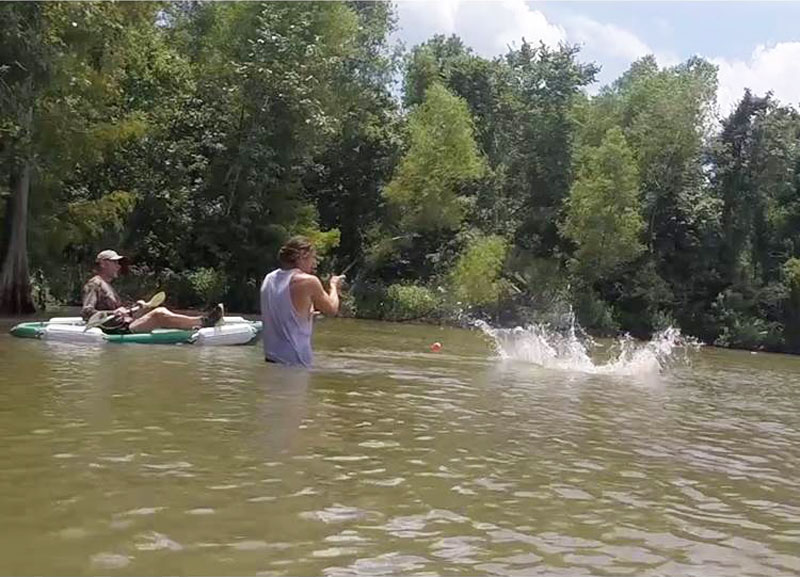 “I was in the water, about waist deep … and that big ol’ shark swam up right on side of me,” Chauvin said. “When we were in shin deep water, that’s when it turned on me. He spun around and actually was about a foot from my foot.

“I jumped as fast as I could and got really lucky. He woulda really tore me up … nearly bit me. I learned my lesson. You need to get all the way out of the water before you try to land the big one. I’m used to swimming with the sharks, but in that area it’s hard to see them in muddy water.”

Still, he and some fellow anglers with him on the outing were able to land the shark on the bank — eventually.

“He actually snapped the pole in half,” said Chauvin of the struggle. “Then we got him and were able to take a quick picture before we let him go. We didn’t want to kill the shark … I’ll tell you what, though, he was really big.”

That’s par for the course for Chauvin, who’s out there for the sport of it more often than not.

“I like trophy animals. I don’t really target fish to eat them now … I really don’t eat them much anymore,” Chauvin said. “If I do, it’s the smaller ones to eat. With the bigger ones, I like to see what’s out there.”

He says it’s just how his personality is wired. Chauvin likes to explore the road less ventured.

“I like going after things that haven’t been done,” said Chauvin, who landed a 6.5 foot alligator later on the same day he hauled in the 7-foot shark. “I like to push the envelope and use different tactics.”

That extends past fishing and hunting — even on days where he does fishing or hunting. Chauvin is also an avid fan of “ultra marathons,” or marathons that extend past 26 miles, and can extend up to 100. The wrinkle he adds is he’ll join in those runs after having gone hunting or fishing earlier in the day.

“The challenge for myself is to push through the exhaustion,” Chauvin said.

This story first appeared on the St. Charles Herald Guide.

The LWFC passed a notice of intent to remove the shark closed season for recreational and commercial fishermen. […]