Temperatures are steadily dropping now, so some folks will be spending less and less time on the water.

Only the most diehard anglers typically venture out in December and January, so now is the time to take care of some key outboard maintenance to make sure your boat cranks up and is ready to go next spring.

Mercury Marine’s Eric Reilley and Dale Witkowski suggested six winterization tips that will not only keep your boat protected during the winter but make sure it’s ready to hit the water next year.

1. Change the oil and oil filter on inboards and four-strokes

Most owner’s manuals recommend at least an annual oil and filter change, and Witkowski said doing it before storing your boat for the winter makes sense.

“I would suggest doing it before you put it away,” he said. “Run it and get it warm so that it drains out, and then fill it with fresh oil so that any contaminants like water, dirt or anything that’s in the crankcase that’s not supposed to be there gets cleaned out.

“Then let fresh oil run through the engine before you put it up.”

“Most guys just look back to see if the pee tube is flowing water, and they think the water pump impeller is fine,” Witkowski said. “But if you’re dealing with saltwater, brackish water and shallow water — where things might get sucked up into your engine — on an annual basis it wouldn’t hurt to make sure your engine is getting all the water that it needs to keep cool.”

Reilley also said the rubber veins of the impeller can set, which can cause water flow issues.

“They can conform to the shape they’ve been used in because the rubber is stiffening,” he explained. “The diameter of the rubber just gets hard and brittle, and it can just freeze in that state.”

First, use a product like Mercury’s Quickare to stabilize the fuel and prevent water from being attracted to it inside your tanks. And once a month, use Quickleen that will get into your combustion chambers and clean up any carbon deposits that might be built up after running, especially under low-rpm conditions. Finally, Quickstor should be added to your tank to protect internal fuel systems during the winter storage period.

“We do recommend having the fuel tank full, with a stabilizing product in it,” Witkowski said. “And we suggest that they run the engine after they put the Quickstor in it so the fuel circulates throughout the fuel system.” 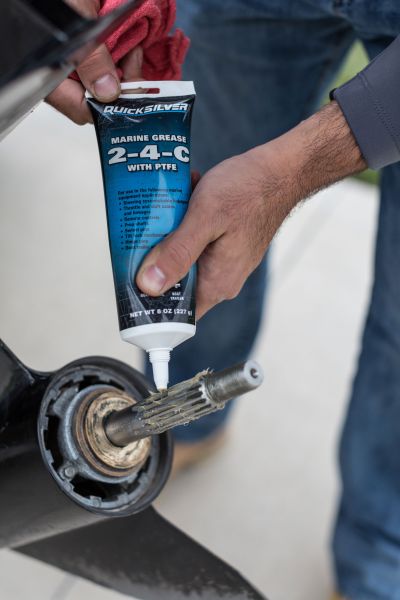 Also, consult your owner’s manual and change your fuel filters.

“A rule of thumb is every 100 hours, is what you’ll see in the literature,” Reilley said. “So if you have a fisherman that’s putting a lot of hours offshore, he would have to do this more often than you’re weekend warrior who’s going out once a month.”

“They’re called sacrificial anodes for a reason,” Witkowski said. “The rule of thumb is when they’re 50-percent gone they need to be changed.

“Saltwater eats up everything. (Anodes) give up their lives to save the more-expensive components on the engine.”

“One of the main things we recommend is to drain this to get out any emulsification that might have happened or water that might have gotten in,” Reilley said. “If you don’t drain it before winterization, what happens is — if it freezes — the water expands and it could burst your gear case or drive.”

6. Disconnect your battery until the spring

“Just make sure it’s not touching anything,” Witkowski said. “That way there’s not the chance of anything drawing it down, so on the off chance if you do hook the boat up and go down to the dock, you’ll have juice.”

Take a jig for a swim; tie on a swim jig

A swim jig is the perfect lure for bass when it seems like nothing else is working, and it doesn’t take a pro to tie one on and catch fish. […]

On a late-winter or early spring day, bass will flock to the warmest water around, and that’s often next to sun-soaked wooden cover. […]

Escort has added to its line of semi-automatic shotguns a model specifically designed for turkey hunters, at an affordable price. […]