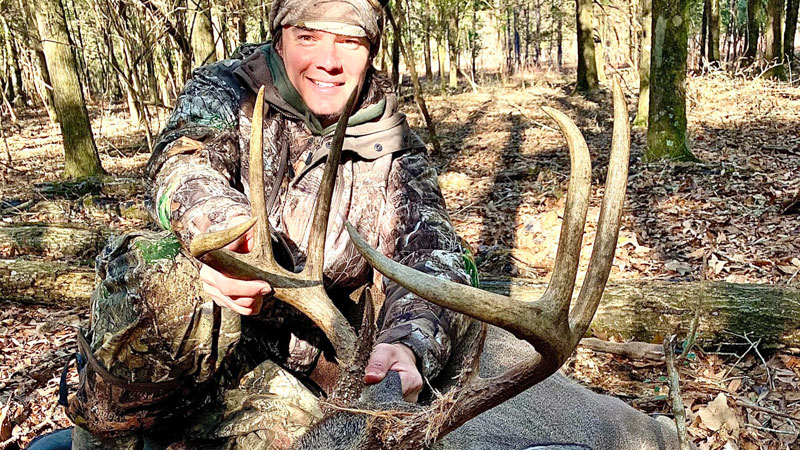 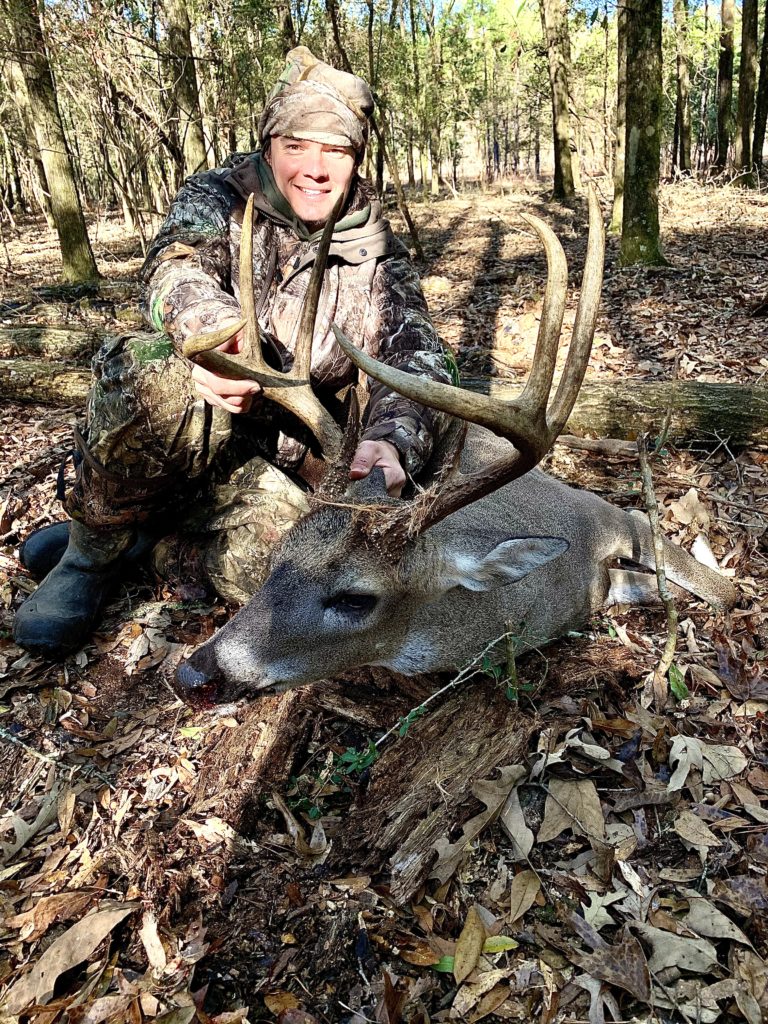 “Two days after Christmas, Dec. 27, will be a day I won’t soon forget. That weekend was one for the books to say the least. The day before was the first time my buddy, Dee, ever hunted the family land I am able to hunt in Mississippi. We saw 64 deer that day and I was able to take a nice 7-point that evening. The morning of the 27th was the day we were going to get Dee his deer. I told him we were going to sit in a new stand I deemed the buck parade the year before. This was due to the fact that I had seven different bucks chasing does around me one morning last year. I told my friend it seemed like I was sitting on the sidelines watching a buck parade, that’s when the stand got its name. We were running a little behind that morning and it was cracking daylight when we were getting into the stand. As we were slipping in downwind of the stand, something caught my eye. I saw what I thought was a decent buck about 100 yards in front of the stand. I looked at Dee and said “there’s your buck brother.” I told him to stay on my hip pocket as we eased our way closer to get a better look at the buck that was pushing a doe. I was laser focused on the animal as I snuck through the woods. After walking about 50 yards, I turned to tell Dee that it was definitely a shooter because I was able to catch a glimpse of what looked like tall tines on one side of his rack. Unbeknownst to me, Dee had stopped walking about 40 yards back and waved for me to keep going. I walked another 20 yards and saw the doe he was pushing coming into the opening. I rested my gun on a small sweet gum tree and shouldered my Browning 7mm-08. The buck seemed to have a sixth sense about him and just wouldn’t come into the opening. As he turned to walk away from me, I noticed the large rack that rested upon his head. He took two more steps to the left and eased into a small opening. I had a gap in between two small saplings and I could see his vitals. I let out a deep breath, steadied the rifle, and squeezed the trigger, BOOM! I did not see the deer after I shot so I slowly walked back to Dee and told him to go back to the west and go sit in another oak bottom while I went to look for blood. He said “no way man, I’m coming with you. I know you hit the deer, I heard it hit.” So we went back to where I was standing when I shot the deer and looked down into the saplings. The deer had fallen in his tracks. We both saw the deer at the same time and let out some yells of excitement as we jumped up and down like a bunch of school girls. Man were we pumped. As we approached the deer, I then understood that this was by far the biggest buck I, or anyone else had ever taken off of the family property. As I reached down to pick up his rack, I was in disbelief. I ran 12-15 trail cameras on the property all throughout the year, I even had one about 50 yards from where I was holding the deer and never once had a picture of him. That’s why I named him the Unknown 8. After taking about 47 pics and getting that “perfect angle” we began to butcher the deer and pack him out. We got back to the truck after a long walk out of the woods packing the deer out and I began calling friends and family. It is a moment I will never forget. The deer ended up scoring 140 3/8 inches, which is an absolute giant for Wayne County Mississippi. I got the deer mounted by Walkers Wildlife Art Studio and hung it next to the big screen in my man cave. Several times a week I still stop and admire him for several minutes before walking down the stairs.”