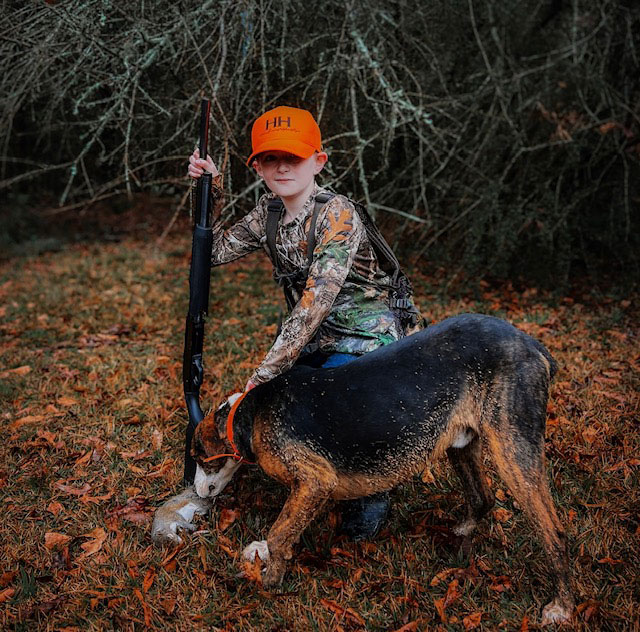 “My younger brother, Turner, and I started the outdoor brand Hooks and Heritage to honor our heritage and the outdoorsmen that came before us. Keeping the tradition alive as it gets passed down through the generations is something most hunters feel is important just as we do.
Squirrel season is always a special season to us because we have made many memories in the woods as a family hunting and learning how to become better from our dad and Pawpaw. Everything from training dogs to using the ole saw briar trick to get a squirrel out of a hole. Those old timers sure do know some tricks.
Every hunter that has had a good dog knows they are one of a kind. To us, that was Pawpaw’s Buster. He got him back around the summer of 2010 and we’ve never been on a squirrel hunt without him, until this season. The woods just aren’t the same without him. But, I am lucky enough to get to own a puppy from his blood line (Buster’s grandson) and I named him -Little Buster.
I am honored to have killed my first squirrel with him in the same woods where Buster used to hunt. My Pawpaw has taught me everything he knows about squirrel hunting and I was able to take Little Buster in the woods and get a squirrel of my own.
Hunting brings people together and memories are made that can never be forgotten. But most importantly, I want other kids our age to know that it’s important to listen and learn all we can from those outdoorsmen that came before us. We’re the next generation and we have to pass along their knowledge and respect for the woods and all the tricks we’ve learned along the way just as they have done.
We’ll never forget ole Buster. But, we look forward to all the hunts and memories that we will make with Little Buster.”

Owner of Hooks and Heritage