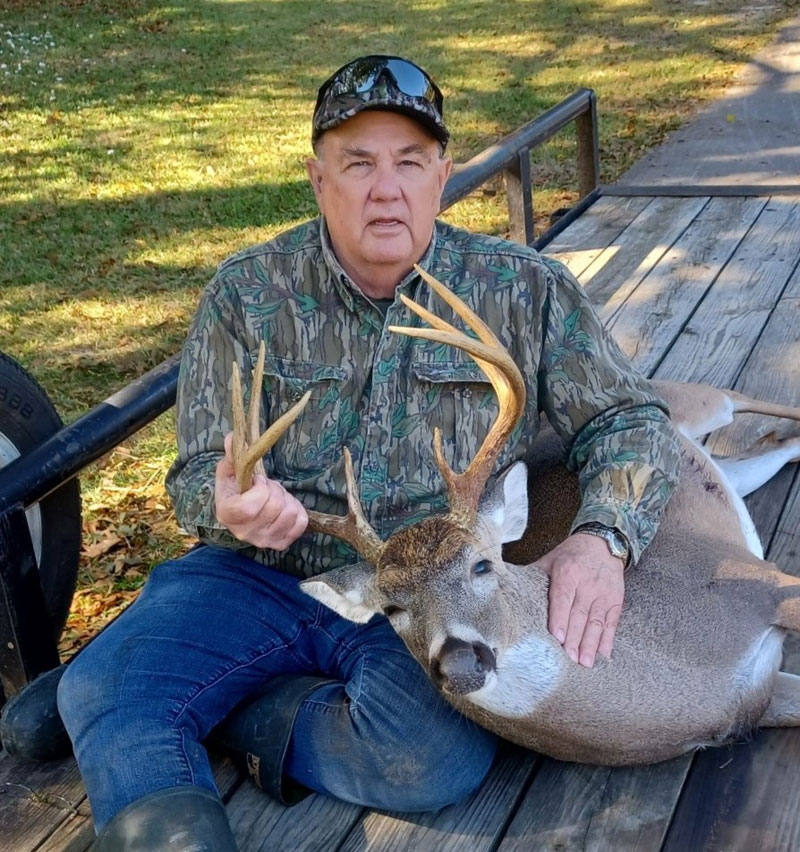 “Due to time and distance, I seldom get the chance to hunt my native state of Louisiana. So an invitation to open the whitetail season with my cousin on his North Louisiana farm was most welcome. The weather was unseasonably warm, so the deer were keeping their activities to a minimum. Two days on the stand passed without a glimpse of a deer. Our other two hunters had seen deer and one had killed a small fork horn. My stand was situated in a marshy area with lots of brush.  Looked like a good area to me so I politely declined the offers to move me to a better area. Instead, I chose to hang fast in the swamp. My perseverance was rewarded shortly after dawn on day three. A deer had emerged from the swamp but was hanging close to the thicket to conceal his headgear. As the swamp grew lighter the antlers of a shooter buck were revealed. I set up for the shot and admired the beefy frame and thick barrel of the Contender.

The little gun as envisioned by J. D. Jones was chambered for the .358 JDJ sometimes referred to as the .358 x .444 because it is based on the .444 Marlin case necked down to 35 Caliber. This Little Beast delivers the power of a .358 Winchester rifle in a handgun sized package. Its throaty roar and hefty recoil leave no doubt that you have indeed encountered a J.D. Jones “Hand Cannon.”  Squeezing the trigger on the Contender destroyed the reverie of the swamp and put my quarry in full flight. I mentally replayed the aftermath of the shot. My sight picture was good. Tail down. Flat out running. No leaping. All of these can be indicators of a fatal hit. I received a text from cousin asking about the shot. I told him I thought it was 50/50 without inspection. We agreed to wait two hours before taking up the trail.

After the appropriate wait and a little searching, we found a handsome Louisiana swamp buck piled up a next to the creek bank. The little JDJ had done its job as had the 200 grain Remington Core-Lokt. The deer sported a perfect 8-point rack and weighed 160.2 pounds. Standard hunting load was the R–P 200 gr PSP over 53.0 gr. of AA-2520. Distance to kill was 71 yards.