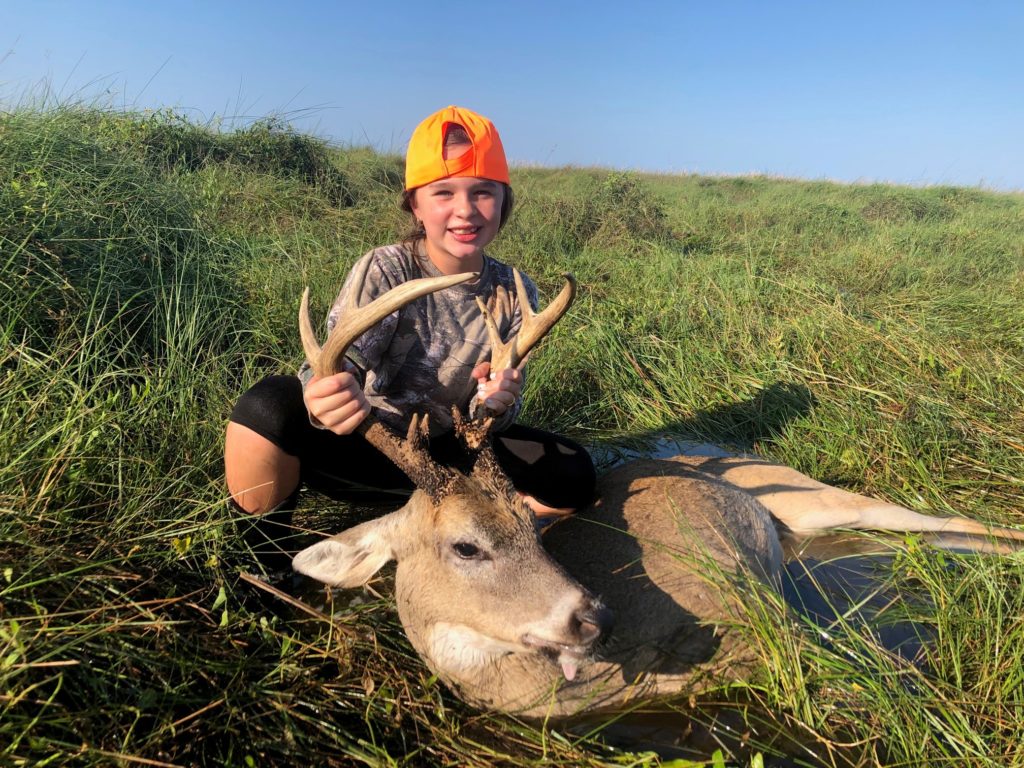 Whitney Defelice (age 10) started the 2020 Area 7 season off with a bang, literally. Whitney killed her first buck, a nice 10 pt.

Mike Defelice (Whitney’s Dad): Whitney was pretty pumped about going hunting Saturday morning. At the last minute, she decided to have a friend sleep over so it was just myself and Ethan, my 12 year old son. I had seen the buck on Friday while riding around the lease. Ethan and I got into the stand on Saturday morning and within 20 minutes of being able to see, I could see the buck following a doe. I told Ethan it was a shooter, and that it was a tall 8pt. The buck was 65 yards out. Being that it was opening day, Ethan decided to let the buck walk, in the hopes of running into a bigger one during the season. He suggested we bring Whitney back and hopefully get her a shot. I showed Whitney a picture of the buck when we got back home and that was all that it took. We went back Saturday afternoon. About an hour into the hunt, a doe appears and the buck is behind her, about 75 yards out. For some reason, the doe stopped just short of the shooting lane, turned and walked off in the direction they came from, taking the buck with her. We decided to give it one more shot on Sunday morning. As the sun came up, I could see the buck about 250 yards away with the doe and a few other deer. With a little luck on our side, over the next 2 hours, the doe slowly fed towards the stand with the buck staying 50 or so yards behind her. For the last hour, it became a waiting game. With the doe feeding 50 yards in front of the stand, we watched the buck hide in some thicker vegetation about 75-80 yards out. Finally, the doe proceeded to the left, crossing the shooting lane. Without letting her get to far away, the buck emerged and followed. He stopped broadside about 85 yards out, just short of the shooting lane. I asked Whitney if she found him in the scope, her response “I’m on him”. I told her “When you are ready, put it in his front shoulder”. Whitney flipped her Remington Youth model .308 off of safety and counted down “three, two, one” and shot. With his front left leg hanging, the deer stumbled and fell in the shooting lane. It was all smiles and excitement. When we recovered the deer, it had split brow tines on both sides making it a 10pt.

David and Grace King with a large bull red

Grace King and her dad, David King, with a large bull red caught off Elmer’s Island on May 14, 2022.