Baby D Bomb is a blast to fish, in January

Caleb Sumrall of New Iberia, a Bassmaster Elite Series pro, downsizes from one of his favorite soft-plastics, a Missile Baits D Bomb, to a Missile Baits Baby D Bomb after Christmas and into early February.

“I fish with it a lot a good percentage of the time. It’s always on my deck in January,” said Sumrall, 32, who knows what he’ll have on the business end of a fishing rod in January, a time of the season when getting bass to bite can be difficult.

The 2017 B.A.S.S. Nation Championship champion, Sumrall gets fish to bite with a soft-plastic creature bait he has plenty of confidence in while punching and flipping in and around the Atchafalaya Basin and at Toledo Bend.

“When it is colder, I want a smaller-profile bait going through the mats,” he said. “Colder weather makes them a little lethargic and the smaller profile bait gets a few more bites.

“The fish are starting to stage under mats around cypress trees. Any time I’m around the Basin or a canal-type system, I focus on laydowns, grass mats and cypress trees.”

The 3.65-inch Missile Baits Baby D Bomb is smaller than the popular D Bomb, thinner with a ribbed body that can still accommodate a 3/0 flipping hook, according to Sumrall. For those who prefer to fish it other than Texas-rigged, it’s good to go on a shaky head or drop-shot.

When Sumrall punches with the soft-plastic bait, he uses it on a 2/0 or 3/0 Gamakatsu flipping hook under a 1- or 1½-ounce Kajun Boss tungsten worm weight. He ties it to 50-pound Sunline Xplasma Asegai braid on a high-speed reel with a 7-foot-10 Kistler Zbone 5 Heavy casting rod. 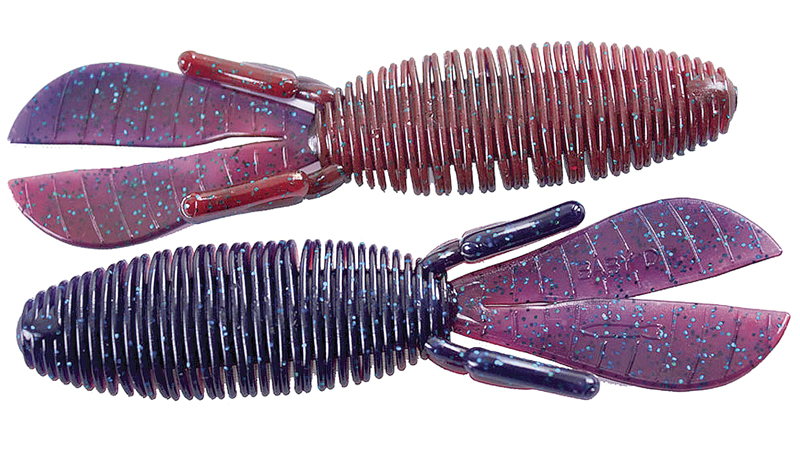 For flipping purposes, Sumrall likes to use a 3/16- or ¼-ounce Kajun Boss Tungsten worm weight.

“Typically, I want a lighter weight in the colder months. I want a slow fall,” he said. “Typically, I pick apart laydowns and wood and mats. I let the fish tell me what I want.”

Sumrall said the soft-plastic creature bait displaces water on a straight fall thanks to the thinner-ribbed body design and the pronounced think tails — which can be fished connected or separated. It’s also very durable, he said.

But it’s a soft plastic with subtle action as it drops through the water column.

“You don’t want anything with a lot of action that time of year. You want a subtle action,” he said.

Barnett launched its HyperGhost line of crossbows this past fall, featuring the 405 and 425 models, which are full of the latest features and technology. […]

Time for Louisiana duck hunters to make some changes

With fewer ducks visiting Louisiana’s marshes, hunters need to come up with some new ideas and plans to keep their success on par with past seasons. […]

When the bite is on, crappie will hit most anything: jigs, shiners, spinners, wax worms, etc. When they get a little finicky, give them something extra. […]

About Don Shoopman 305 Articles
Don Shoopman fishes for freshwater and saltwater species mostly in and around the Atchafalaya Basin and Vermilion Bay. He moved to the Sportsman’s Paradise in 1976, and he and his wife June live in New Iberia. They have two grown sons.