The Wall is a great winter spot for speckled trout and redfish in the Chalmette area. Here’s how to make the connection.

You know the fishing is hot when you pull into the boat launch well before daylight on a weekday, and you are directed to a parking spot by a traffic guide waving a flashlight.

The guide is none other than Jimmy Dixon, owner of New Orleans’ Bait Inc., who said he has to direct the otherwise haphazard parking so he can accommodate everyone who shows up — and the crowds have been showing up in big numbers every day of the week.

“It’s feast or famine in this business nowadays,” Dixon said, “and after one of the toughest summers ever because of the Spillway opening, we need it.”

I was meeting Joey Jeanfreau and my brother, Tony, the three of us going to see if we could put a dent in the trout population. Jeanfreau is a St. Bernard native and a third generation grocer, but he is also an avid, life-long Chalmette-area angler who keeps his finger on the pulse of the action.

I hauled my boat down for the excursion, and Dixon’s crew loaded up my baitwell with 200 frisky, live shrimp. Then, Jeanfreau piloted us into Bayou Bienvenue, through the lock and across the MRGO. 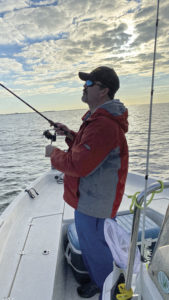 Even in the breaking light, we could see boats already lined up against the Wall. Most anglers prefer fishing the front side of the Wall, which faces Violet, the direction any storm surge would come and from which the Wall was built for protection. The backside of the Wall, which faces the Paris Road bridge and the side you see when leaving the Bayou Bienvenue Lock, is the side with the huge support beams extending down deep into the bottom of the MRGO to keep the Wall from collapsing under the massive weight of a storm surge.

We traveled through the Guillotine Gate in Bayou Bienvenue and followed the Wall to our right, all the way back into the MRGO.

“Most boats have been anchoring along the Wall, but we’re going to fish along the rocks in the MRGO,” Jeanfreau said. “The action has been pretty steady when you anchor about a cast length from the rocks, and fish all sides of the boat.”

He said just about anywhere along the rocks from the Dam to Violet was worth trying.

A half-dozen boats were already anchored along the rocks, so Jeanfreau passed them and took a spot farther down away from the crowd, and we anchored about a cast’s length from the rocks in 12 feet of water.

At that depth, your Power Pole or Talon are of little use. Most of your fishing will be in 12 to 20 feet of water or more, so have a good anchor with enough chain and rope to hold you in a moving tide.

My brother and I loaded our hooks with live shrimp and threw our cork rigs toward the rocks, hoping for reds or trout, while Jeanfreau fished a live shrimp on a bottom rig cast towards the deeper middle of the Ship Channel.

And we waited for a bite.

And we waited some more.

We did what fishermen do: popped our corks, reeled in, cast out, cast on the other side, rechecked our baits and repeated the process. Tried plastics, tried deeper under the corks, grew antsy and thought it was past time to move. By this time, some of the boats near us already pulled up anchor and moved elsewhere, while other boats came and took their places. A lot of boats were running around, indicating that they weren’t catching anything, either.

“I don’t mind giving these spots extra time to produce, because the fishing here has been so consistent,” he said. “We’ll give it a little longer before we move.”

Then we got our first bite of the day, a slightly undersized trout. But still an encouraging sign.

Then Jeanfreau got a good bite on his bottom rig and reeled in a nice, keeper-size trout. My brother and I grabbed our bottom rigs and threw towards the deeper water and got good hits almost immediately. The bite was on; the trout were nice-sized, ranging from 12¼ to 14 inches, and the action was steady, even furious at times. On several occasions, my bait didn’t reach the bottom before a trout grabbed it and took off, basically hooking himself. We did lose bait to the usual culprits: bait stealers, bad casts, undersized fish and a freshwater catfish or two. But even with the constant boat traffic coming and going, and even with one inconsiderate doofus who decided he’d troll directly over the spot to which we were casting, the bite remained steady.

While we were catching fish consistently, it was obvious by the sheer amount of boats moving around, many others weren’t doing as well.

Jeanfreau offers these tips if you plan to get in on the action.

“I find the fishing here to be a bit different than what most anglers are used to. They give an area five to 10 minutes, then move,” Jeanfreau said. “That works in shallower water but here we are a colder weather hotspot, and the fish mostly hang in deeper water. If I’m fishing in an area that I know produces fish, I’ll give it extra time. Of course, the balance is, you don’t want to waste valuable time sitting in an unproductive spot, either. I guess the key is to know the area, know when to stay a bit longer and when to move elsewhere.”

“Everybody knows the fish bite when the tide is moving, whether rising or falling. It doesn’t matter as long as it’s moving. Dead tide means dead action. And a hard, moving tide can make it difficult getting your bait to the bottom. I typically use a 1-ounce sinker on a drop-shot rig to get my sinker to the bottom, but also to keep my shrimp off the bottom. This is just what works best for me,” he said.

“When the weather is cold, fishing along the Wall can be very productive. I see people fishing on both sides of the Wall under all tide conditions, but by far, I find it most productive when I fish the side where the tide is incoming through the gates, rather than falling. Anchor along the Wall and fish the bottom. If I fish the back side of the Wall, the side with all the support beams, I’ll use a sliding-cork rig to keep my hook off the bottom. The support beams are buttressed by tons of big rocks, so if you drop a bottom rig there you’re gonna lose it,” he said. 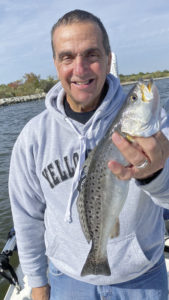 Besides the Wall and the MRGO rocks, Jeanfreau said the area has numerous other options to try.

“The Intracoastal Waterway holds fish, and you always see boats anchored along it. From the junction of the MRGO to Michoud Slip on down to Third and Fourth Bayou and Bayou Thomas, or at the washouts and cuts along the way,” he said. “I catch fish up by Boh Brothers and the Bulk Plant on the other side of the Paris Road Bridge, or I’ll head towards Violet and fish several places out there, around the Bulkhead wall, or the castle, or the washouts just past Violet. Plus, you always see boats anchored on both sides of the Bayou Bienvenue Locks. There are options.”

Tony Tardo shows off a nice Chalmette speckled trout caught along the rocks that line the MRGO.Meanwhile, I fought a 5- to 6-foot gar that somehow got my hook snagged in his tail and ran circles around the boat for 20 minutes before freeing himself, and still, our trout action continued. We finally ran out of bait, and I strung a Matrix Creole shrimp shad on my hook and picked up a couple more before we called it quits with a near three-man limit. It’s nice going home with a smile.

About Rusty Tardo 363 Articles
Rusty Tardo grew up in St. Bernard fishing the waters of Delacroix, Hopedale and Shell Beach. He and his wife, Diane, have been married over 40 years and live in Kenner.