A typical drive down a rural road in Louisiana might bring an encounter with a dog, deer or coyote, but in the early morning hours of May 27, Darryl Zar faced off with an elk that stepped out in front of his truck on Highway 23 near Myrtle Grove.

Zar, employed as a deckhand with Bowfishing Unlimited, had been working all night. At about 4:45 a.m., an elk step 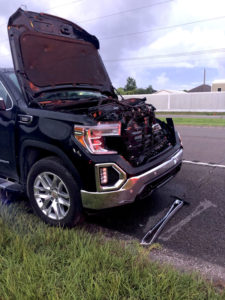 ped in front of his pickup truck, which was travelling at 65 mph.

“All I saw was a flash of brown,” Zar said. “In that area, there is a big concrete wall, and he (was) between it and the highway.”

Elk are not native to Louisiana, but before 2005, some were brought into the state privately and kept behind high fences, typically used to corral animals residing in game preserves. Hurricane Katrina made its way through the area and wreaked havoc; fencing was destroyed and animals were released to the wild, where they have roamed ever since.

“The story goes that there were over a dozen loose,” said Capt. Jeremy Roussel, owner of Bowfishing Unlimited, who was following behind Zar in his own vehicle when the incident occurred.

A shock for sure

After striking the estimated 600-pound animal, Zar gained his composure and concluded he was not injured.

He said the elk died before a tow truck was able to remove the vehicle from atop the animal.

“It was like no other morning that I have ever experienced,” Roussel said; he recalled the tow-truck driver being squeamish, so the men had to crawl under the truck and connect the tow-truck chains themselves. 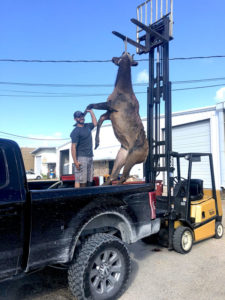 Local authorities were dispatched to the scene, and when contacted, the Louisiana Department of Wildlife and Fisheries determined the incident did not fall under its jurisdiction, Roussel said.

“We didn’t want the elk to go to waste, and we asked if we could have it,” said Roussel, who got a friend to show up with a skid steer, load the carcass into Roussel’s truck, and he headed to his business, off-loaded the elk with a fork lift and butchered the animal to use the meat.

Zar said he had only made one payment on his new truck, but he was thankful he was not hurt. He said he has travelled that route hundreds of times and has never had an issue.

“I’ll travel under the speed limit for sure,” he said.