It would be hard to find another duck hunter in America who was a better example of achieving the American Dream than Warren Coco of Baton Rouge.

In 1977 as a 22-year-old, the Baton Rouge resident began a company destined to become one of the most important and influential members of the waterfowl industry — GO-DEVIL Manufacturers of Louisiana.

The first version of the GO-DEVIL motor weighed nearly 300 pounds, but worked like nothing Coco had ever seen. For the next three years he put in 18-hour days without a paycheck, founding the company with about $1,000 capital and a handful of garage equipment. Today, he has more than 30 full-time employees with more than 52,000 square feet of high-tech buildings turning out at least 1,800 engines per year. The company has come from a dream in a garage to an important and influential member of the waterfowl industry.

“I have been blessed to be born in Louisiana and even though my family nor I ever had a lot of money, I’ve been able to pursue my dream and turn my love for old engines and outboard motors into what I have today. It just goes to prove that in this great country of opportunity, anything is possible.” 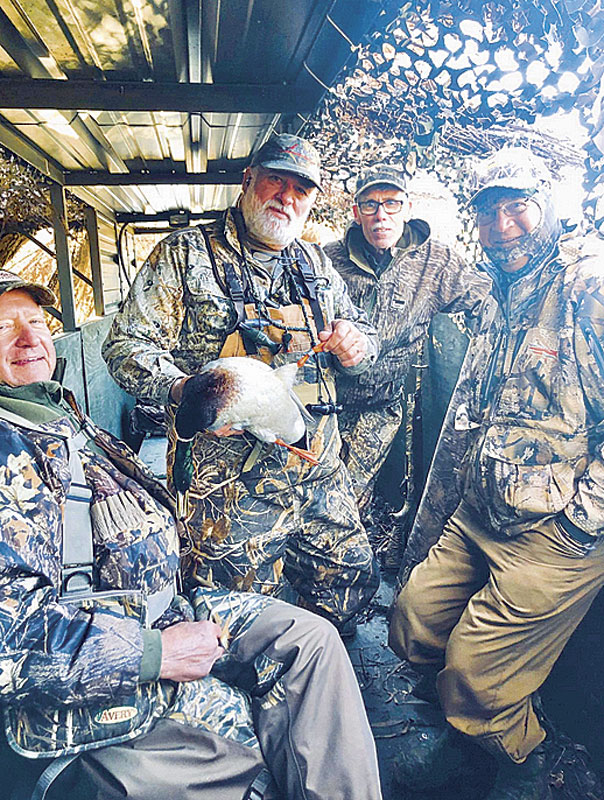 Like many American success stories, Coco’s GO-DEVIL started out with a laugh and a “that will never work” reaction. But the concept did work and now the company has an entire line of some of the most used waterfowl equipment in the world.

Coco has been able to turn his passion for duck hunting into his full-time job and livelihood. Prior to the construction of the first GO-DEVIL motor, Coco had built several versions of inboard mud boats. Each of his creations had limitations. Knowing Coco’s abilities, a buddy of his told him about a “funny looking motor” he had seen that might just work.

Upon seeing the motor, Coco literally fell to the ground with laughter, and stated boldly, “That thing will never work!”

The motor was constructed from a 40-year-old Briggs & Stratton cast iron engine, a universal joint, a drive shaft with a rubber hose for a bearing, and a bronze prop, mounted on a 1960 Evinrude transom bracket. The concept for the engine was brought back from Vietnam, where motoring shallow water is a life necessity.

After examining the motor closely and considering the possibilities, Coco could not sleep! An avid duck hunter, Coco wanted to build a motor to give duck hunters easier access to shallow water areas that were prime for duck hunting, but almost impossible to reach without treacherous and dangerous wading for long distances.

But after that first thought about the possibilities, it didn’t take Coco long to get going. In three weeks, Coco found a 10-horsepower Kohler engine and enough scrap metal to build the first GO-DEVIL.

His friends laughed when they saw the metal monster. They laughed even harder when Coco told them he was planning to go into business manufacturing engines. Coco took a risk and quit his $5-an-hour job and went to work on his dream. It’s a dream that has come true for him and for waterfowlers that depend on using his equipment.

Coco is most famous for his company. However, his greatest contributions to waterfowl and those who enjoy hunting them have come through his steadfast support of wetlands conservation.

One of those projects is the RESTORE The Mississippi River Delta. He was featured in an ad for that group, saying “I’m a duck hunter and fisherman. I’ve owned GO-DEVIL Manufacturing for 43 years and I’ve been a landowner and land manager for 23 years. My property includes 1,600 acres of coastal wetlands with a conservation easement and wetland restoration project. I feel the Mid-Barataria project is a must-have and many more behind it.”

Ducks Unlimited honored Warren at a tribute event in his honor in 2015 with more than 300 friends and family attending. They raised funds and celebrated a conservation project on Dewey W. Wills Wildlife Management Area near Alexandria that will be dedicated to him and his wife, Donna. The project restored 3,000 acres of forested wetlands to improve habitat for waterfowl and other wildlife. The couple is a DU Heritage Sponsor and Warren was named an honorary trustee on DU’s Board of Directors.

The engine products have come a long way since the days shown in a photo with this article, where Coco is driving a 52 HP Air-Cooled Diesel Longtail creation that he custom built for a customer in Venice in 1979.

Today, the three most popular products sold are Longtail motors, Surface Drive Motor and the GO-DEVIL boat. The GO-DEVIL Longtail motor isn’t just for duck hunting and has been sold in every state and province of North America. It runs in conditions such as heavy vegetation, mud trenches, cypress swamp and rock-laden river and has been called “The Four-Wheel Drive” of marine engines. The Surface Drive is designed for durability in the thickest muck and nastiest environments known to man. GO-DEVIL boats come in rounded and tapered chine models for every condition.

You can learn more about those products at https://www.godevil.com/

The Legends Hall of Fame was founded by Garry Mason of Springville, Tennessee. The Louisiana Chapter is managed by Peyton McKinnie of Marion. You can find out more about the groups on Facebook.

The Louisiana Department of Wildlife and Fisheries will hold a wood duck hunting seminar for beginners in Baton Rouge on Nov. 5. […]