Duck hunters looking for an early Christmas present before the opening of the season from the Louisiana Department of Wildlife and Fisheries November aerial waterfowl survey report will just have to wait. But hold on, duck Santa may still be on his way.

Overall, the 1.04 million ducks estimated in this preliminary survey is the third lowest November survey since it began in 1968, according to Larry Reynolds, Waterfowl Program Manager. It is barely half the most recent 5-year and long-term averages of 2.0 million.

However, it is still way better than last year, when the weather was so bad that aerial surveys couldn’t even be completed and duck numbers and opportunities were extremely low. And no matter what this survey says officially, by next week, it will be moot, says Reynolds.

“We have to report the numbers that we see and my personal take on that is that what we’ve seen is relatively poor in the areas we flew, but it is still way better than last year,” he said. “However, this is all going to be moot when this cold front comes barreling through the state. Everything is going to change for the better, I think. There are large numbers of birds in Illinois and Missouri and their reports are well above average. The cold weather has a whole lot of ducks susceptible to head our way being pushed down by the weather.”

That cold front swept through the midwest and into north Louisiana last night and lowered temperatures drastically and brought gusty winds. 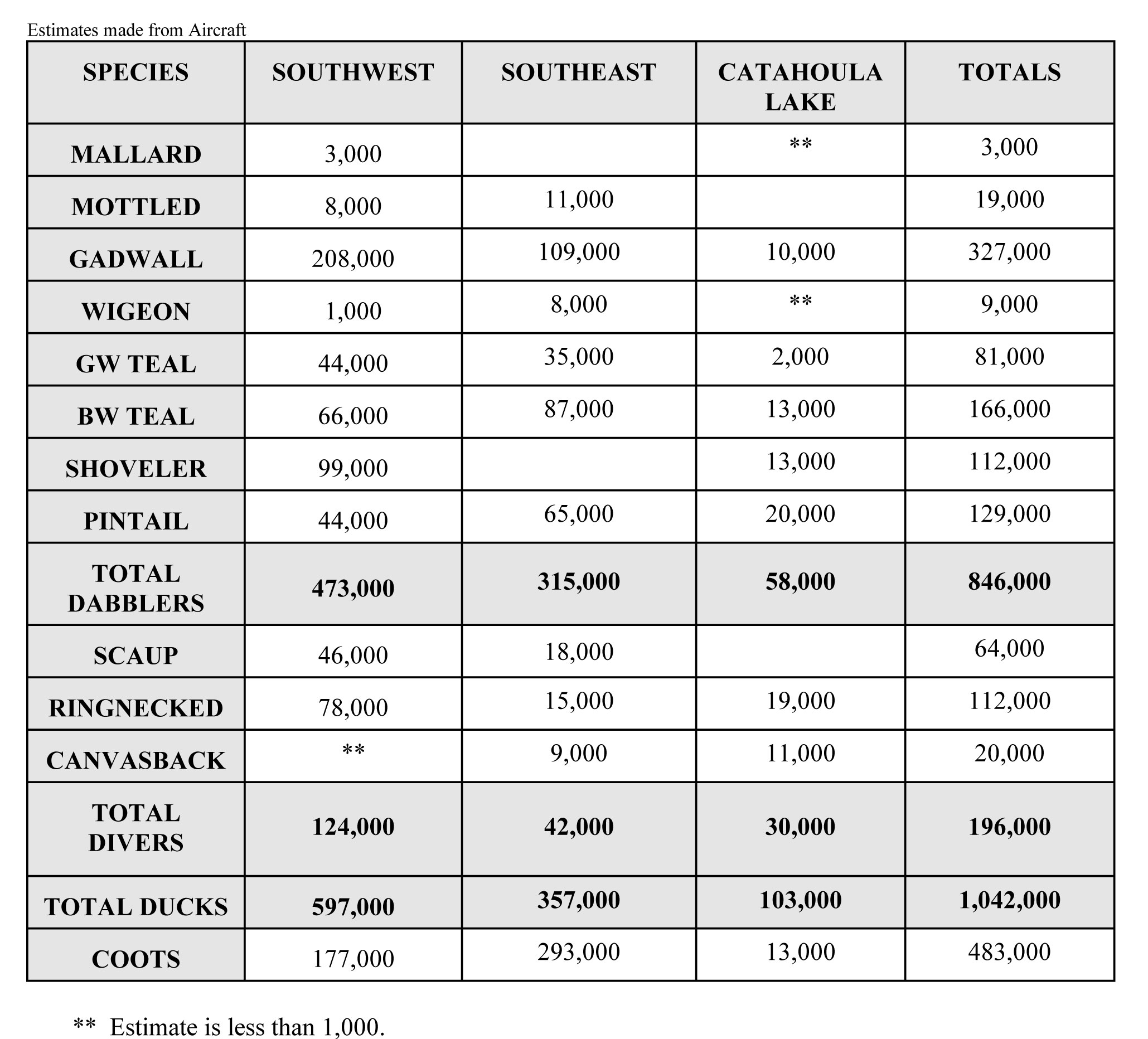 The aerial survey preliminary numbers also only include the southeast, southwest and Catahoula lake numbers. Surveys in the northern part of the state will be flown next week and added to the final report. Already in those areas even before the weather change, Reynolds is hearing good things.

“I’ve heard lots of reports from people in the field there that say there are several areas in north central and northeast Louisiana that are chock full of ducks,” he said. “That’s encouraging.”

A lot of the agricultural fields got flooded by recent rains and are holding good numbers of ducks. Those numbers will become official when the surveys get flown next week, Reynold said.

A few other highlights of the survey work done so far

The LDWF has issued a request for proposals for waterfowl breeding grounds habitat work through the next three years. […]

About Kinny Haddox 395 Articles
Kinny Haddox has been writing magazine and newspaper articles about the outdoors in Louisiana for 45 years. He publishes a daily website, lakedarbonnelife.com and is a member of the Louisiana Chapter of the Outdoor Legends Hall of Fame. He and his wife, DiAnne, live in West Monroe.