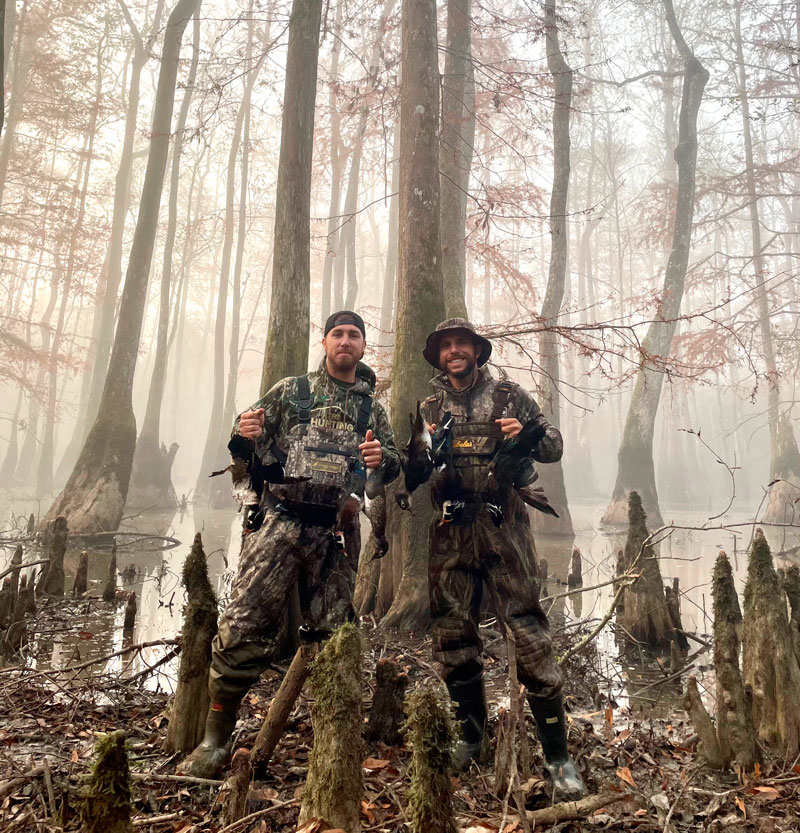 Most hunting and fishing efforts offer a specialty approach that increases both the difficulty of the pursuit and the reward of a successful harvest.

Whether outdoorsmen elect to go “bow only” for whitetail or sight fishing for redfish, all these stylistic changes add challenge and enjoyment chasing the game we love. Duck hunting may not have a classical comparison in that regard (nobody’s going back to crack-barrel 10 gauges). But the targeting of a specific species like the wood duck is a serious option for raising difficulty and excitement levels.

Matt Miller and Dustin Koeppel, both from Slidell, are die-hard duck hunters that have been chasing these flighty birds for years. These guys have developed knacks for not only finding wood ducks, but also getting them in close for productive hunts. When they are not out chasing big ducks on their marsh leases, they can be found putting their experience to work bagging limits of wood ducks.

Where is as important as how

They want to find where the birds are going instead of where they’ve been.

“I look for openings,” Miller said. “We prefer to find ponds, but you are looking for an opening in the trees like a Greenhead spot.”

These backwater ponds generally provide the birds with a place to loaf during the day. Also, since these lower lying areas collect winter rains, they tend to collect good numbers of acorns. As the water levels move, the ponds provide for foraging opportunities on acorns floating along the pond edges.

“They want to be in here,” Koeppel said. “We will hear people shoot and a minute later those birds are dumping in on us. They’re coming in here to eat.”

Miller and Koeppel hunt multiple locations, but generally stick with three consistent producer holes. These holes vary in size from the classical looking timber opening to a long and skinny cypress break. The bigger holes do tend to keep more duck attention. But that also means more hunters will be able to set up on those birds.

“If this pond doesn’t get hit too hard, it will last awhile,” Miller said. “November feels like it has the most pressure on the ducks. The high schoolers are out. Then college lets out. Those guys are in here hunting all week. That pressure can make it tough later in the season.”

Journey is the destination

It may be a long truck ride to park, but get ready to take a hike. Literally, these guys have chest waders on, ruck sacks of gear, and miles on the ground. They are in the dark, off trail and navigating by memorized terrain features that often involve crossing the tiny bayous. Word to the wise, the underwater branches are hazardous.

“One time, I just tangled up crossing them and went down holding on to my gun’s kick pad,” Miller said. “The butt popped off and my gun flew. I stood up, looked around, and dove right back in. I got my gun, dried it off and shot a wood duck after that.”

Making it through the hike and hazards and reaching the pond, Miller and Koeppel dial in their set-up. In the dark, it’s difficult to discern the “opening” the wood ducks might use. Plus, pressure on the birds means they can come from different directions one day to the next. Both guys routinely scout ponds prior to hunting them. They’ll scout the morning, mid-day, or afternoon to see if birds are sitting on the spots.

“I was in here scouting yesterday afternoon. They had birds on the pond here and over there,” Koeppel said while pointing to the locations he believed the bird would be.

Head on a swivel

Miller and Koeppel’s goal is to have a clean shot at the birds. So similar to a conventional pond set-up, they set out a few decoys. But the decoys are set out in random patterns, instead of larger groupings or a J-hook. Reminiscent of how the birds might fly together, they arrange the decoys in pairs and small groups; couple here, a three pack there.

“We don’t “treetop” them. We let them drop in and let them land,” Koeppel said while setting up a pair of drake decoys.

As we watched the shooting time count down on Koeppel’s Ducks Unlimited app, the unmistakable sound of a flying wood duck draws complete silence. Hunter’s eyes glued to the skyline. Each person straining to discern the outline of a wood duck from the dark silhouette of the trees. You could hear a pin drop.

Then the sound of wings fills the air around us in what seemed like all directions. Splashing and ripples reflect off the water. We can see a wood duck bouncing between decoys. And just as quickly as they appeared the ducks were gone.

“With the lack of wind this morning they’ll come in wherever they want,” Miller said smiling. It still wasn’t shooting time, but excitement was at a fever pitch.

A few moments later, Koeppel’s app sounded shooting time. Shortly after, a three-pack hit the hole. The lead bird landed, and the other two birds hovered just above the water. In a rapid volley, two drakes and a hen wood duck were down.

Just as Miller predicted, birds began swarming around in from all directions. The ducks never seemed to come from the same direction twice. A pair would come from the right; Miller and Koeppel would position themselves to shoot right; and new ducks would drop in from behind.

It was fast-paced shooting where Miller and Koeppel’s experience together paid off. Both guys were tracking different birds, while calling out shot opportunities. Each hunter would independently pull up on flyovers that might drop without warning, only to have to furiously pivot to a completely different bird that dropped in from nowhere. They had several shots at single ducks that had come from opposite directions, at the same time.

They were able to both get in position to make their shooting count. In less than an hour, limits of beautiful wood ducks were on the strap. Koeppel summed up wood duck hunting well, “They’ll fly every day. If they don’t have birds anywhere else, its foggy, hot or no wind, we can come in here and pull a few limits.”

Like all ducks, wood ducks don’t seem as plentiful as they may have been five to 10 years ago. In contrast, Louisiana’s population of black-bellied whistling ducks has seemed to have increased significantly. These ducks are even showing up with measurable numbers in the Louisiana Wildlife and Fisheries (LDWF) Aerial Waterfowl Survey.

Some hunters have expressed concern over the rise in black-bellies since they share nesting habitat with the wood ducks. It’s not uncommon to see black-bellies using wood duck boxes, which validates hunters concern about healthy wood duck numbers. Jason Olszak, Waterfowl Program Manager for LDWF, described the nesting times and overlap between these two species.

“Peak nesting for wood ducks is March-April and range is from January to July,” he said. “For black-bellies, peak nesting is May-June with a range of March-August. Biggest overlap of the two species in cavity use is April-May.”

Generally, since wood ducks start breeding sooner than black-bellies, the wood ducks still maintain the choice nesting boxes. Olszak also offered insight into preferred nesting locations for the two ducks. Black-bellies like nesting in trees which are adjacent to more open areas like along the edge of a pond or bayou. Wood ducks prefer nesting in the typical heavy tree density of a cypress swamp.

Bottom line, if you’re thinking about replacing some of the wood duck harvested this year, get those boxes out early. And get them deep in the swamp.

Chad Belding, whose show is the No. 1 rated series on The Outdoors Channel, filmed an episode of “The Fowl Life” in Louisiana. […]

About John Manion 22 Articles
John Manion is an LSU graduate and has been writing about the Louisiana outdoors since 2009. He grew-up hunting and fishing the marshes of South Louisiana and lives in Slidell with his wife Betsy and their two girls. He can be reached at jemanion4@gmail.com.