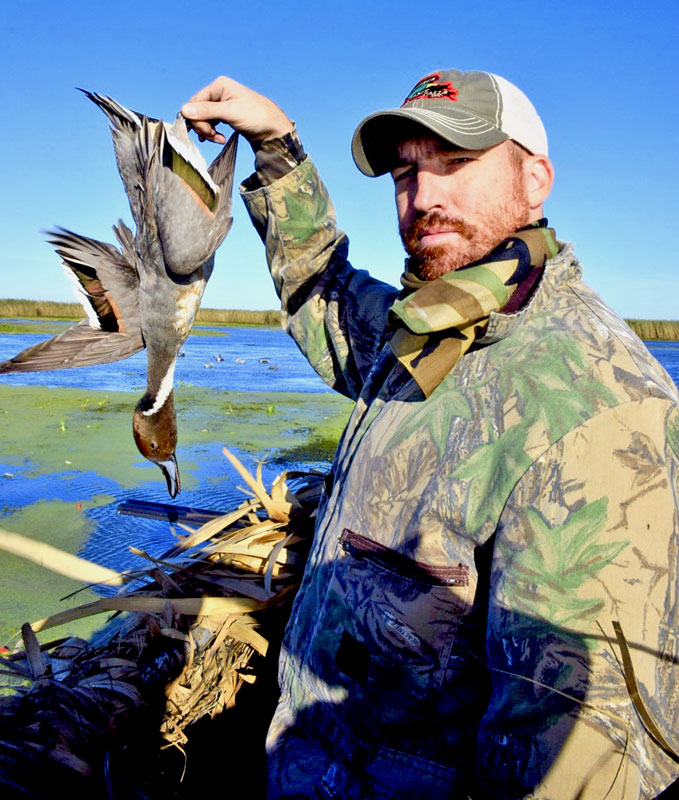 Fishing is understood to be great, but in January, it’s duck hunting that sets the world on fire on Pass-a-Loutre WMA and in the surrounding marsh that’s open for business.

That thin sliver of land defying the Gulf of Mexico is Louisiana’s southernmost land mass. Most people just call it Venice.

That simple name hides a tremendous amount of outdoor diversity. There is so much to Venice, you could do an entire magazine just on the variety of the game and fish there. If Louisiana is the Sportsman’s Paradise, then Venice is the microcosm.

Aside from world-renowned offshore angling and nationally highlighted inshore angling for both freshwater and saltwater species, Venice is a waterfowl mecca.

But Venice covers a lot more geographic area than a duck lease. There is a ton of privately owned and/or leased duck hunting land on the east and west sides of the Mississippi River. A substantial amount of land owned by Plaquemines Parish is available for hunting. A word of warning about the parish property, usually referred to as “School Board Land” — it is a complex situation of “Who owns what?” and “Where’s the line?” Hunters should be informed before rolling out to hunt. Visit www.plaqueminesparish.com/265/Permits) to get your ducks in a row.

Then, there is the Venice that covers public land downriver. First, near Main Pass, the Delta National Wildlife Refuge is more than 48,000 acres. Defined sections to the north and south of this refuge allow hunting. This area is managed by the U.S. Fish and Wildlife Service, so the regulations are more stringent than state Wildlife Management Areas. Take a look at those regulations at www.fws.gov/refuge/delta/ before taking the boat ride.

Last but not least, the jewel of Louisiana’s WMAs is Pass-a-Loutre. It covers more than 115,000 acres of huntable area and feels like the last place on earth. It’s a haul to get down there, but there are multiple tent-only campgrounds — because you can’t do just one hunt anyway. PAL provides world-class duck hunting when its right, plus, the place is also full of rabbits, hogs and deer.

Duck hunting is allowed 30 minutes before sunrise to sunset. Mudboats are effective tools, but they are restricted after 2 p.m. A pirogue works well, too, and 1.6% of the WMA is a Limited Access Areas for non-mudboat hunters. Take some time to check rules: www.wlf.louisiana.gov/page/passaloutre.

What gives Venice its rich life is also its biggest barrier. The Mississippi River is literality the source of life for the entire estuary: inshore and offshore areas. It can be as calm and serene as a bayou stream and as turbulent and rough as a storm in the Gulf. Every year, die-hards run the river in mudboats, and every year, photos circulate of a swamped or sinking mudboat.

Older and wiser than he was in his 20s, George Cox of Slidell pilots his 24-foot boat downriver. Gear for three other campers, including Tre’ Haydel of Baton Rouge and Evan Graham of Lafayette, is packed into all the available spaces, along with Deke, the 6-year-old Lab who does most of the retrieving. With an 18-foot mudboat in tow, Cox is rolling on the river.

Playing slalom with freighters typically pegs out the anxiety meter. Once underway, Cox intensely studies the water and tries to discern to port or starboard as what seems like a 5-foot mound of water bubbles from the depths, caused by a freighter’s wake. The water raises and lowers the entire boat as it eases over. The mudboat dances around like a puppet on a string, momentarily disappearing in the splashing white water.

Emerging from the wheel wash, Cox announces, “We good. We good. No, we’re good.” Albeit a little damp from the spray, he’s back on the throttles and headed to camp.

Thanks to funds received as a result of the Deepwater Horizon disaster, the campsite Cox pulls up to has 50 feet of brand-new dock space. Before, there were only two small docks at the Loomis Pass camp. That usually meant a big boat got dock space, and you’d have to fight the mud getting in and out of the mudboat. 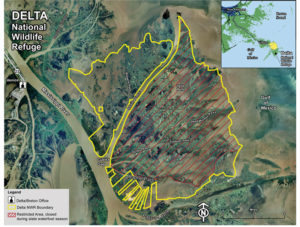 Anxiety flips to excitement when Evan advises, “We have the birds!”

A large, open bay sits right behind the camp. In lean years, there might not be a bird in that place. But in the good ol’ days, you could walk across that bay and not get your feet wet because of all the ducks. This year is good, mostly poule d’eau, but there are wads of big ducks dropping in. After 25 years of hunting, this bay, known to the group as Bullfrog Bay, is the barometer for duck numbers in the WMA downriver.

The group rushes to get gear unloaded and camp set up. Most heavy items were hauled in the mudboat for better tacking downriver, because a light boat bounces like a cork. It must be unloaded to go check the hunting spots. In Pass-A-Loutre, everything looks like a duck hole, because everything is a duck hole, which is why Cox and friends are there. Kidding aside, birds’ roosts change year to year, particularly this year with the incessant tropical weather. Locating a flyway or even a legit feed is really the difference in getting the chance at a limit or just shooting a few.

Finding a concentration of huntable birds might be  the secret to hunting PAL, but it isn’t a secret to the duck hunters. Everyone’s looking for that “X”— it’s why mudboats are overused and limited on the WMA; the practicality is finding multiple locations to hunt. With tens of thousands of acres, there isn’t a need to set up near other hunters, but that’s public land. Two good-looking spots were located, one close and another a longer boat ride away from camp. 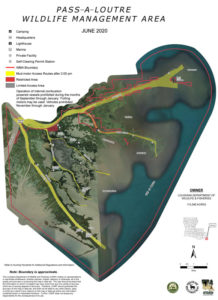 Friday morning started early. With coffee being such a precious commodity to this group — George brings a generator and large coffee maker— we weren’t on the water 3 hours before shooting time. The public-land competition is high, and rolling into the first hole, Graham announced over the engine, “They’re already in the island. Guys are already hunting it.”

Option No. 2 was next: a larger, open bay with a handful of small, roseau cane islands. The average depth was a couple feet, and somehow, the bay had survived the wrath of Hurricane Delta. Visible aquatic vegetation was spotty throughout. Unfortunately, it also came with a thousand poule d’eau, which are much better duck attractors than plastic decoys.

Cox’s group went big, with a full arsenal of around 14 dozen decoys set up around one of the islands, with decoys on both sides and behind, leaving the middle of the spread open for birds. Throw in a Mojo on each side, and the hunting was on.

“Right there. Right there,” Haydel whispered as four ducks bucked the north wind to sail from outside the decoys toward our blind. They were greeted with reports from four shotguns. The sound of ducks slapping the water was too much for Deke, who launched toward them.

The morning hunt continued in that manner. The birds all seemed to start on the outside of the decoy spread. Some would break closer  to present a shot, but others saw too much and preferred the safety of rafts of poule d’eau. The bag was mostly greys and a few widgeon and pintail, with green-winged teal mixed in for limit filler.

Cox, a fisherman at heart, called the hunt finished. “Y’all ready to go catch some fish or what?” he asked.

Fresh, fried fish is hard to beat, so the group was looking to put fish in the box; take-home fish is just lagniappe. The quality of inshore fishing is again dependent on the river; less mud means more fish. A few spots near the campsite are deeper holes, usually marked with rock structure produced. The first fish were bass and channel cats, way too fresh.

Cox made the call. “We gonna go hit South Pass rocks.” After meandering the boat around too many sandbars to count, he made it to the jetty and clearly greener water. Three boats where already fishing the west side of the Pass. The group went old-school: market shrimp on the bottom, so it had to bounce around to find a pocket of fish.

Haydel’s passion is picking up 14 dozen decoys; second is re-rigging bottom tackle. He did plenty of that, but once a group of fish was found, it turned into an easy box. Plenty for dinner and plenty enough for Cox to take home for his ceviche.

Do it again tomorrow

With the sun disappearing behind the horizon, the day ended with supper on the camp stove followed by a few after-dinner drinks around the campfire.

The “No. 1” tip for PAL? Bring firewood, cause you ain’t camping without a fire.

That was just Friday. Cox and Co. still had to wake up and do it all over again on Saturday.

Group of friends work together to boat big yellowfin

A group of friends were on a fishing trip with Capt. Nick Campos out of Venice when they hooked into a 238.2 pound yellowfin tuna. […]