Olszak: “No records set this year other than low records”

With no place to go but up, the Bayou State’s January duck numbers rebounded from the paltry numbers observed in the December survey. The Louisiana Wildlife and Fisheries (LDWF) estimated 2.1 million ducks were  wintering in our coastal marshes and on Catahoula Lake mid-January. But that count is still 28% below the long-term average of the 2.9 million birds that are usually here in January.

Digging into the numbers, nearly half of estimated ducks are divers – 441,000 dos gris (or scaup), 333,000 ringnecks, and 157,000 canvasbacks. Worse yet, our bread-and-butter ducks like mallards, widgeons, and grey ducks all declined from the December estimates. On the upside however, the second largest number of blue-winged teal ever surveyed in January was strong at nearly a quarter million birds. In many areas, that was the best shooting of the season. 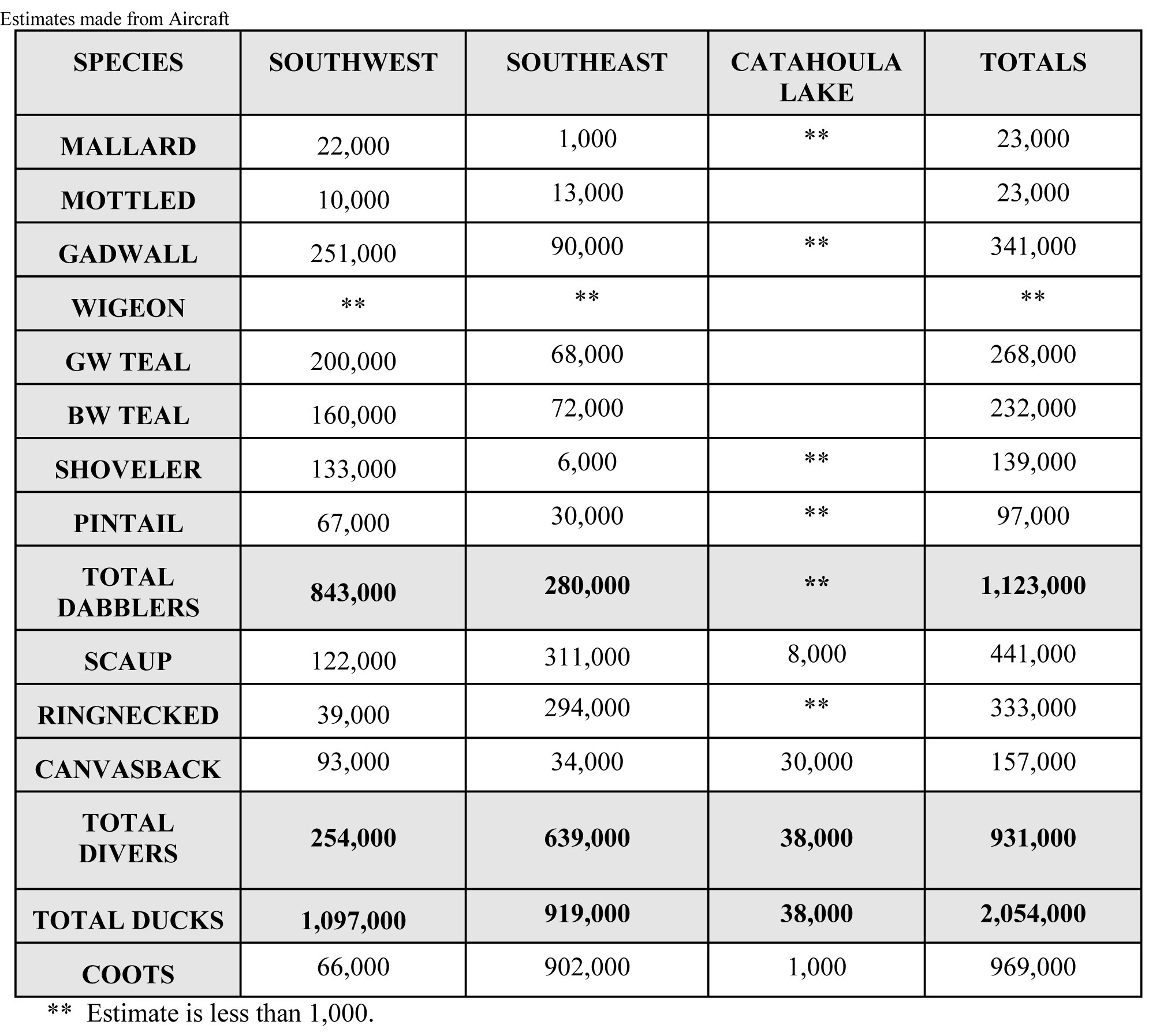 Jason Olszak, the new waterfowl program manager for LDWF, reflected on the season by concluding, “No records were set this year, other than low records. Our December survey was the lowest ever.”

He also noted that the species composition has been different than the past years.

“In the November survey we had hardly any divers,” Olszak said. “And gadwalls were way down in November as well.  They have only just increased to respectable numbers.

Habitat issues in central and north Louisiana have been difficult all season long. The season started dry and continues to be dry. Drew Mire who hunts the Louisiana Delta Plantation around Jonesville summed up his season as dry and slow.  Due to the lack of rainfall, they were not able to hunt early on.

“We are just starting to see a few ducks after Christmas, but there are mostly ringnecks,” he said.

Duck hunting success depends a lot on location. A few of our state’s usually productive areas also produced some good hunts again this year. Kevin Ericson typically hunts down river in Venice and was able to find huntable numbers on a consistent basis.

“We had to work for them,” Ericson said. “You were either on a group of birds and did well or it was tough. Pretty consistent number of teal and still seeing bluewings. The big ducks have been hit or miss all season.”

On the other side of the state, Blake LeMaire hunts in the rice fields around Gueydan. In total, LeMaire felt like they ended up with a season that was on par with others.

“We had plenty of teal, pintail, and woodies,” he said. “They really are our favorite eating ducks.”

LeMaire typically sees the mallards getting pushed down when it begins to freeze around mid-January.

“It was slow all year on mallards, greys and the specks,” he said.

Olszak speculated on two schools of thought which might explain Louisiana’s low duck numbers. First, December duck surveys from Arkansas and Mississippi also showed declining populations (their January figures are yet to be released). Conversely, Missouri and some of the higher latitude states are seeing increases in their long-term duck numbers, particularly late in the season. This year’s dry and mild temperatures have not pushed birds down.

The other, a mostly anecdotal observation, is the condition of the summer nesting habitat, particularly for dabbler ducks.

Olszak said, “We don’t have two years of survey data (cancellation due to COVID). Based on the dryness reported in the Northern prairie-pothole region, it’s likely nesting habitat is not as good as it could be.”

The lack of nesting habitat translates into fewer juvenile ducks making it to Louisiana. Unfortunately, that’s something Louisiana duck hunters already know all too well.

CCA leads effort to take pogie battle back to legislature

CCA Louisiana is undertaking a government relations campaign targeting the menhaden fishery in the Gulf of Mexico. […]

For even for the best anglers, targeting trophy trout takes time, determination, perseverance, skill and more than a smidgen of luck. […]