More ducks for Louisiana and some interesting questions

Louisiana has a lot more ducks in December than it did in November. An estimated 2.5 times more, to be exact. That’s what the monthly aerial survey by the Louisiana Department of Wildlife and Fisheries completed this week showed.

The 2.57 million ducks in the survey completed this past week is 2.5 times over the November estimate of 1.04 million. That is also 32% higher than last December’s estimate.

Estimates for all species except blue-winged teal were higher than November. Most notable was the increase in gadwall and mallards. But the survey results did leave state duck leader Larry Reynolds with some questions.

“There is no doubt that the numbers look a lot better than in November,” he said. “There are two things that concern me, though. First, we flew a lot of marsh that did not have any birds at all, then all of a sudden when we started seeing them, there were gobs and gobs of them.”

Reynolds, a veteran of these surveys, said he’s never seen the ducks so “clumped up” in certain areas.

“It was downright scary in some places. We’d see huge numbers of ducks, then fly three or four more transect lines in the same area and see nothing,” he said. “I know the north wind had blown a lot of water out of the marsh and ducks weren’t there, but then we got to the mouth of the river and there were huge numbers of ducks 15 miles away. There is a lot of marsh without many ducks in it.”

The most extreme example was in southeast Louisiana where large numbers of ring-necked ducks were counted in the fresh marsh of upper Terrebonne Parish southeast of Amelia, then very few ducks were counted on the next four transect lines and the line just south of New Orleans for monitoring the Caernarvon Freshwater Diversion. Then another tremendous concentration of mostly gadwalls, pintails, and ring-necked ducks was encountered from the West Bay sediment diversion on the west side of the Mississippi River north to past Venice on the east side. Those two locations accounted for about 80% of the estimate from the entire SE  survey region.

Reynolds summed it up by saying, “When we crunched the numbers, it looked good overall. But the fact is, if you aren’t in one of those areas where it looked really good for numbers, things may be pretty poor in the duck blind.”

Some areas not included

Reynolds’ team was not able to do a complete survey of northeast Louisiana due to a short window between the splits and a shortage of observers. Seven of the 30 surveyed areas, including two that normally have high numbers of waterfowl, were not counted. There have been a lot of teal and some gadwalls and pintails reported in the fields in those areas, however. And the number of mallards being taken in the woods has been at last normal or above normal. 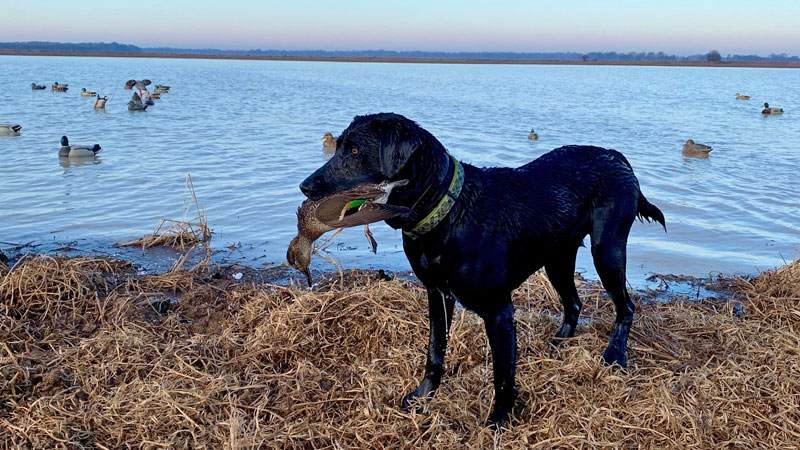 One stark change in reports was in the Bunkie/Grand Cote area, which had the highest duck and goose counts in November. Ducks declined from 107,000 in November to only 20,000 in this week’s survey and geese fell from an estimated 80,000 to around 33,000.

“There have been a lot of redistribution of ducks and one thing we saw that explains some of the large concentrations of ducks is directly related to habitat. A lot of areas have very little submerged aquatic vegetation and they have very few ducks. When we saw the vegetation picking up, we saw the number of ducks increase dramatically.”

Chef Jean-Paul Bourgeois and his crew share their first day at the hunting camp with a morning in the duck blind and catfish on the jug line. […]

How to get “Mo” out of your MOJO

MOJO decoys are made for a tough environment, but taking a little extra care of them can help them last longer and be more dependable. […]

Chef Jean-Paul Bourgeois and his crew discuss the changing coastal wetlands of Louisiana over a lunch of steak and egg sandwiches. […]

About Kinny Haddox 376 Articles
Kinny Haddox has been writing magazine and newspaper articles about the outdoors in Louisiana for 45 years. He publishes a daily website, lakedarbonnelife.com and is a member of the Louisiana Chapter of the Outdoor Legends Hall of Fame. He and his wife, DiAnne, live in West Monroe.