Just as you’d expected for 2020, the Louisiana Wildlife and Fisheries (LDWF) annual waterfowl survey estimate captured the fewest number of ducks in Louisiana since the annual survey commenced in 1969. Only 855,000 estimated birds were seen during Southwest, Southeast and Catahoula transects flights. To put that that in perspective, 2020’s numbers are not even half of the 2 million average estimated birds that typically vacation in Louisiana at the start of duck season. 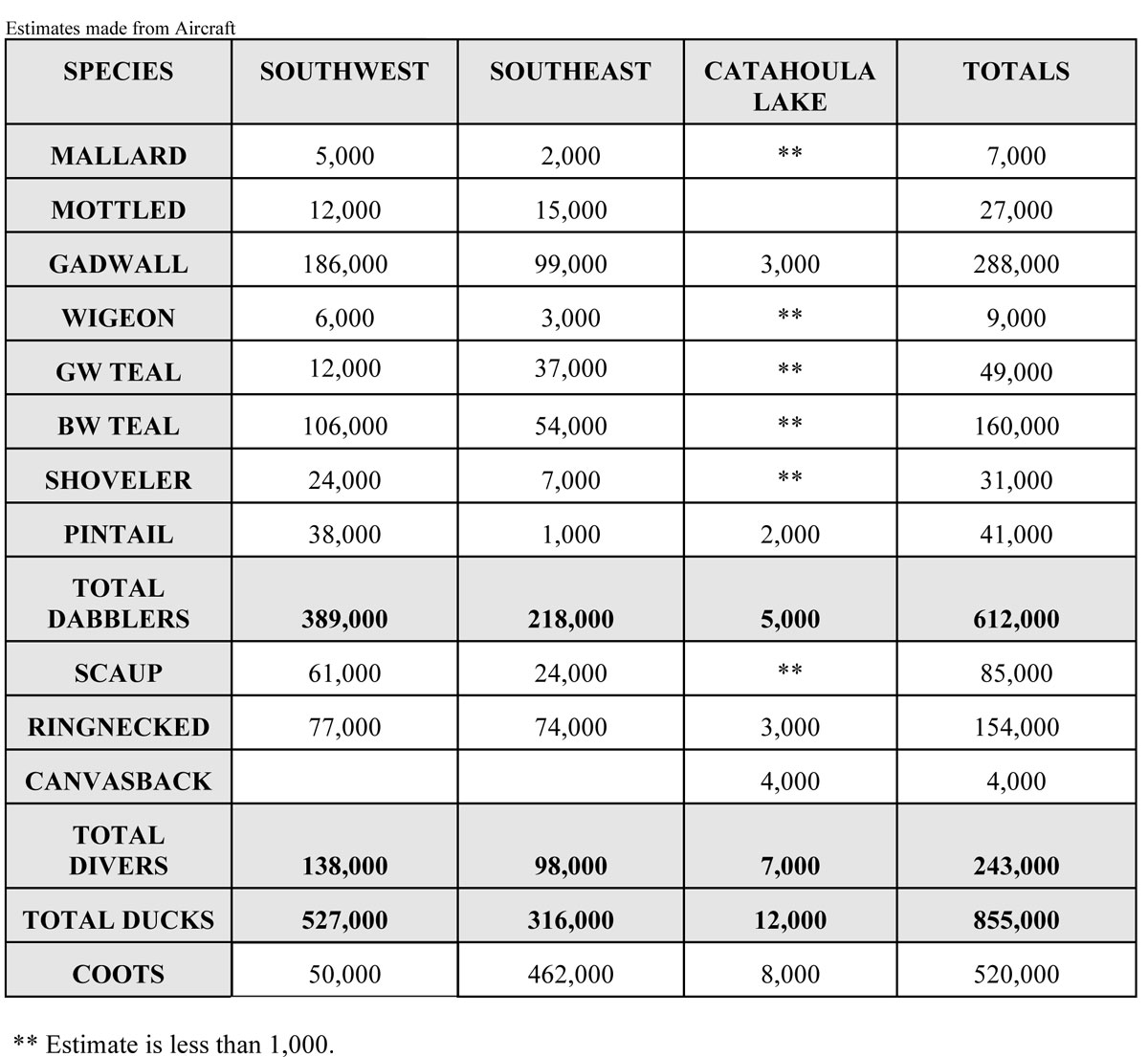 Regardless of those numbers, it’s “Big Duck” season and waterfowlers across the state are happy to get back to the normalcy of chasing ducks. Opening day success is as varied as the ducks themselves, ranging from the worst start to the best start. Hunters who were able to set-up on or near concentrations of waterfowl are doing well.

Ryan Lambert of Cajun Fishing Adventures has been filling limits of big ducks every morning before 8 a.m.

Drew Mire, who hunts the Delacroix area, was also trying to get on birds for the Coastal zone opener.

“We didn’t see a duck for the first 30 minutes of shooting time,” Mire explained. “We did not lift the guns for half an hour!”

But with hunting pressure moving decoy-receptive ducks around, Mire and his 4-man group all managed to take their limits.

“We mostly shot big ducks.” Mire said. “Greys, widgeon, a few mottles, and the rest teal. We weren’t covered up with ducks but the birds we saw wanted to work.”

The opposite of the state is coping with repeated hurricane strikes to the marsh habitat. Brent Goodyear hunts in the Pecan Island area which was lucky to avoid the large saltwater influx pushed in by Laura and Delta. However, areas to the south and west of Pecan Island did take the hit, which has proven to be both good and bad influences.

“The saltwater that did come in killed all the invasive grasses, your salvinia, water hyacinth,” Goodyear explained. “But so was your widgeon grass, and all your natural duck food.  Now, everybody has wide open ponds, water is super clear.”

With areas opened up for the ducks, Goodyear is optimistic that Southwest Louisiana can have a good year. The opener was a step in the right direction.

Clif Lane, who hunts the Delta Plantation near Jonesville in Central Louisiana, had some opening day success. His three-man blind managed to take limits of mostly big ducks, but duck numbers on his farm were down substantially from where they were earlier in late October.

“A month ago we had ducks like we hadn’t seen since the 90’s,” Lane said. “Today, we didn’t see a dozen mallards this morning.”

He attributes the warm weather pushing birds out of the area. “It went to 80 degrees,” he explained.

But Lane remains optimistic for the rest of the season.

“I do believe that we have enough habit here to hold the birds here,” he said. “It’s just a matter of mother nature pushing those birds back.”

As the survey numbers predicted, this year’s coastal zone opener resulted in low average bag takes. LDWF opening day bag checks across Atchafalaya Delta, Pass a Loutre, and Point aux Chenes WMA’s revealed an average bag of 1.7 birds per hunter (2,159 ducks by 1,275) hunters. But the season ain’t over just yet.

Conditions up the Mississippi Flyway remain dry and more substantial cold weather is yet to make it to Louisiana. Both of these factors are conducive to pushing more ducks to Louisiana. Shortly after the coastal opener, a light front moved through and the average duck harvest immediately improved. On Nov. 18, across those same WMA’s, LDWF bag checks recorded an average bag of 3.2 birds per hunter (383 ducks by 120) hunters.

Larry Reynolds, Waterfowl Program Manager for LDWF, explained that there is no doubt that the high salinity levels negatively impacted the coast marsh. Even Catahoula Lake has been impacted by the high water flooding the pastures. Across out state, duck usage of our habitat and the corresponding hunter success rate will be impacted by this year’s hurricane impacts.

“I remember back to 2005 (following Hurricane Katrina), when the marsh was also impacted, but we had ducks,” Reynolds said. “Even a damaged marsh can still support a number of birds.”

“We don’t have a speck of grass, but do have the potato roots,” he said. “Hopefully that will be enough to hold ’em this year. I’m gonna kill ducks come hell or high water!”

Legends of the Outdoors – Johnny Wink

Johnny Wink is the owner and operator of MegaDucks waterfowl hunting lodge, where he has been a duck and goose guide for 45 years. […]

Force fetch is an important step in the foundation of a hunting dog’s training. It begins the transition to more advanced and formal training […]