The numbers of ducks on northern breeding grounds once again dipped slightly this summer to almost 39 million birds, while the number of May ponds also declined by about 5 percent to 4.9 million.

Larry Reynolds, the Louisiana Department of Wildlife and Fisheries’ waterfowl study leader, said this year’s report was actually very similar to the one in 2018.

“Populations of ducks don’t fluctuate from year to year – they tend to trend in a particular direction. And the trend right now is down, so the overall population was down another 6 percent,” said Reynolds, who commented on the report while attending Mississippi Flyway Council meetings in Duluth, Minn. “It’s been down the last few years, and that’s just a result of the dry conditions we had last spring and the poor production.

“It was the worst season in Louisiana ever by a large margin,” Reynolds said. “We killed slightly over 500,000 birds. The long-term average of our harvest is probably about 1.8 million. We were harvesting 2 to 3 million six or seven years ago — but there’s a lot of variation in that.”

Another disappointing number from the breeding grounds survey was the decline of scaup to 3.59 million birds, 28 percent below the species’ long-term average. That result will automatically trigger a change in limit for the 2020-21 season next year.

For the current 2019-20 season, hunters still will be able to take up to three scaup per day throughout the 60-day season.

But Reynolds also pointed out the report wasn’t all bad news.

“There were a couple of interesting good signs,” he said. “Gadwalls bounced back a little bit, and gadwalls have at least traditionally been very important to us in the harvest. They’re 60 percent above the long-term average, up 13 percent from last year. 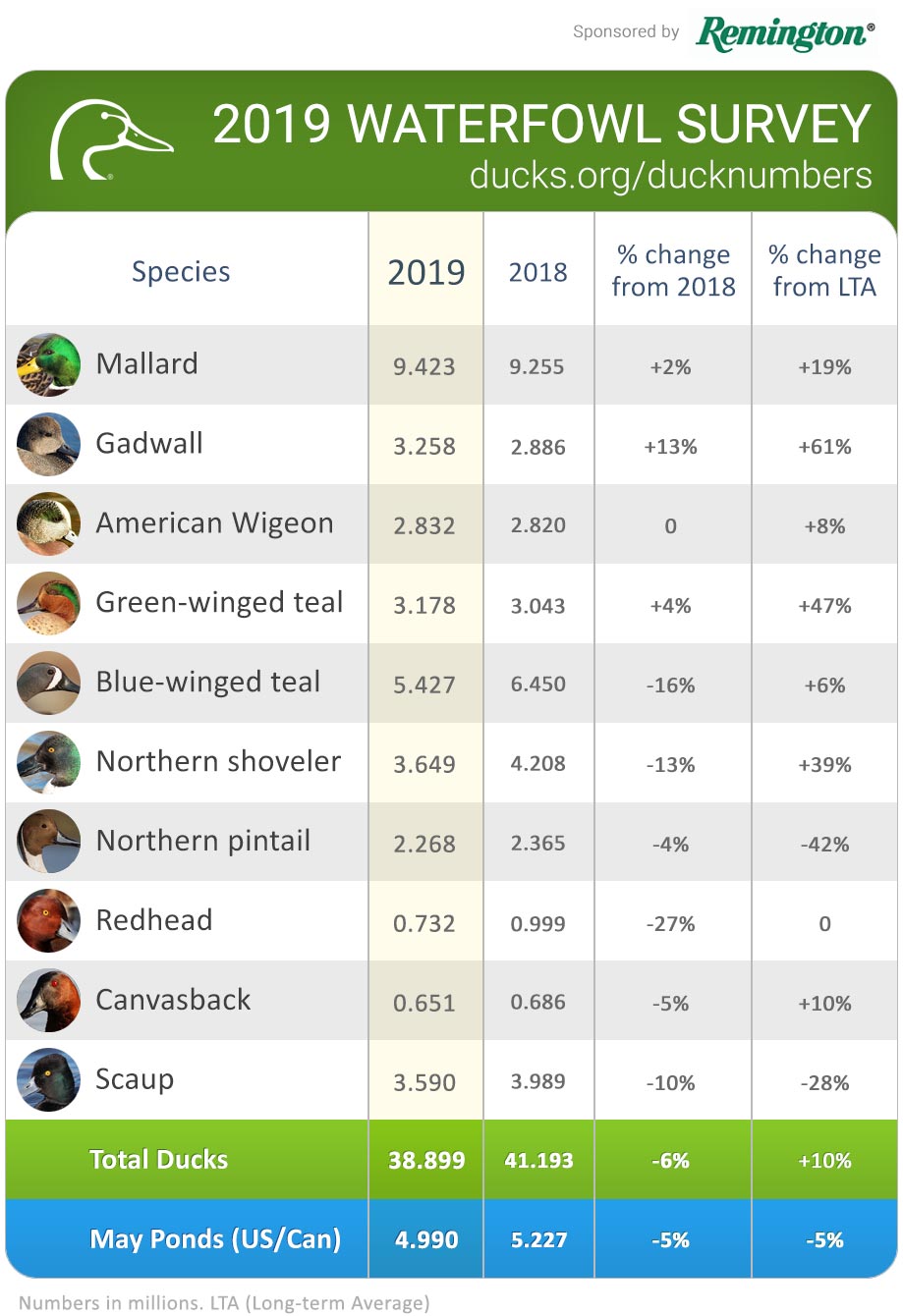 “And green-wings are stable, but blue-wings continue their decline. They’ve been trending in a downward direction, but they’re still above the long-term average and there’s still enough of them where we can have a 16-day season.

“So overall, it’s pretty much unchanged. The duck population is solid. It’s not fantastic, like we’ve seen a few years back, but it’s solid.”

May ponds down — but where is interesting

And although overall pond numbers declined for this breeding season, Reynolds explained that wasn’t exactly bad news for Louisiana hunters this time around. Where the pond numbers actually declined is important, he said.

Another potential good sign for Louisiana duck hunters is the extremely wet spring and summer in the Midwest this year, which could adversely impact the amount of grain produced there this fall.

“We’ve had some discussions about that here at the Flyway meetings. It appears that there’s still good wetland conditions — there’s a lot of water up and down the Flyway. But there’s not a lot of food,” Reynolds said. “The food production will be lower, so a lot of my colleagues are interested in what that’s going to mean.

“They have a lot of water, but they haven’t been able to generate the food that they have in the past. That might be beneficial for us — we don’t really know.”

Reynolds said he’s unsure of current habitat conditions in Louisiana, but he’ll get a better handle on what things look like when he flies the aerial teal survey in a couple of weeks.

“Water levels also are high on the coast, so there’s been no drawdown in the higher marshes, so there is going to be a big reduction in the amount of seed-producing annual vegetation. But I have heard some reports of places along the coast where there’s excellent submerged aquatic vegetation production,” he said. “If that’s true over a widespread area, then that would be a benefit compared to last year.

“Last year we had incredible seed-producing annual production, we had a great drawdown in the summer and everything was good. Then it all got covered up and washed away by all the flooding.”

He also pointed out this year’s drawdown on Catahoula Lake, which normally begins in early July, just started because of high water levels on the Black River and the Red River.

“By mid- to late-July, we normally get germination of moist soil plants, and that’s just happening now,” he said. “So we’re running real far behind.”