Biologists think it will be a good season for squirrels and rabbits on public-hunting areas across Louisiana. Here’s where to find them.

There’s something about a 25,000-acre Wildlife Management Area inside the nation’s last great overflow swamp that appeals to squirrels and squirrel hunters in the know.

Attakapas Island WMA is far from the biggest or most notable public squirrel hunting area in Louisiana. In fact, other WMAs in the Lafayette Region give up thousands more squirrels. But none can match the average yield per hunt at Attakapas Island last season : 2.3 squirrels per hunter.

“As far as hunter effort, it’s been one of the best ones in the region. It is the best,” said Tony Vidrine, a biologist with the Louisiana Department of Wildlife and Fisheries, emphasizing that the WMA’s boat-only access reduces the crowd.

Attakapas Island WMA is inhabited primarily by fox squirrels, with some grays and, Vidrine said, a surprising number of black squirrels. All thrive on the food available.

“They don’t have a lot of oaks there, but they do good,” Vidrine said.

A prime stretch is along the west bank of the Atchafalaya River starting at Myette Point. Head upriver to check out the higher ground, ridges where squirrel hunters have success.

There are other smaller WMAs that offer just as much for avid squirrel hunters than the larger WMAs. Regional biologists across the state recently reported on hunting prospects for squirrels and rabbits. 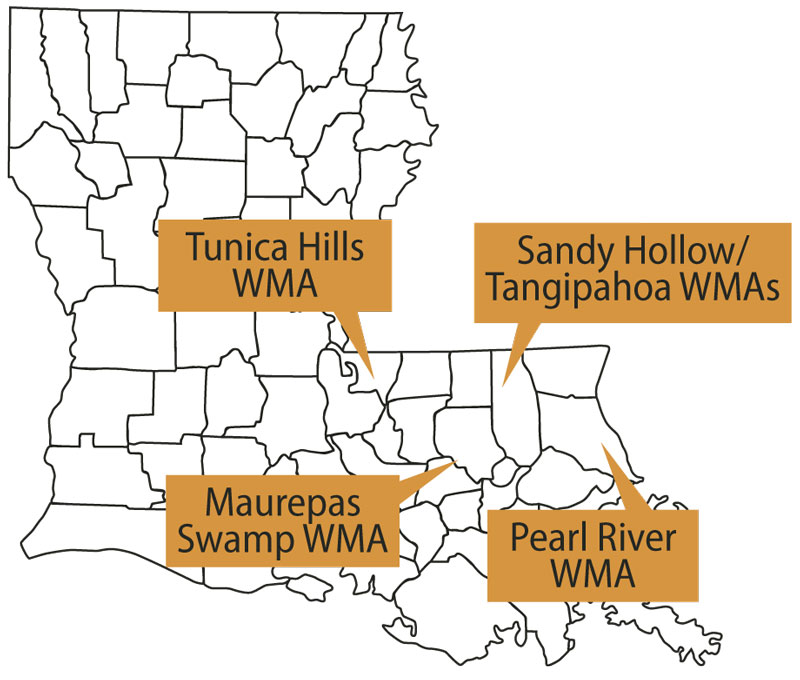 “Our WMAs provide hunters the opportunity to hunt a diverse range of habitat types, from upland hardwoods to down cypress, tupelo swamps and brackish marsh. Whether it be abundant mast-producing hardwoods or the early successional habitat … all provide ample resources for small game,” Breland said.

Squirrel hunters can’t overlook Pearl River WMA, especially north of US 90, which is accessible by foot. The preseason outlook there is at least fair.

Maurepas Swamp WMA can be considered a sleeper. While mast surveys aren’t conducted there, it ranks as one of the region’s top squirrel producers.

At Tunica Hills WMA, the 2020 hard-mast survey was below average for the primary forage in this upland hardwood forest. The reduction in hard mast may have caused a drop in reproduction this spring, Day said.

“Although not all of this area is excellent rabbit habitat, (Maurepas Swamp) is over 112,000 acres and has a fair amount of spoil banks and natural ridges to hunt,” Day said. 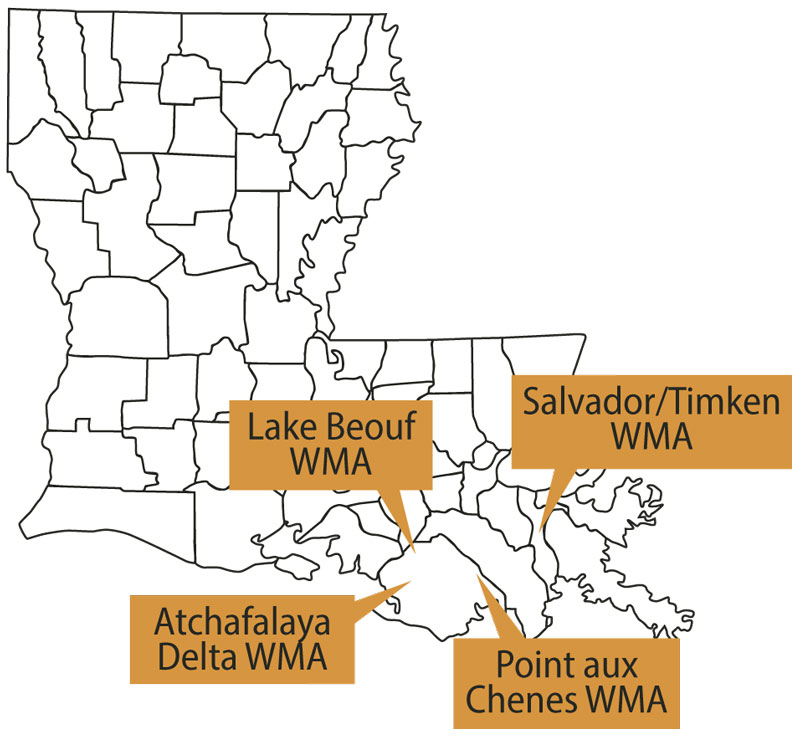 This region’s WMAS are known more for great waterfowl hunting, but they offer at least some fair to good squirrel and rabbit hunting.

Pointe-aux-Chenes WMA has one can’t miss spot, according to biologist Vaughan McDonald of LDWF.

“Squirrel hunting on Pointe-aux-Chenes only occurs on the Point Farm Unit, which is located in Montegut directly behind Montegut Middle School,” said McDonald, who pointed to favorable habitat conditions this season on Point Farm, a historically productive area for squirrels.

Rabbit hunters can find their targets on any of the region’s WMAs. Typically, Salvador/Timken have the highest harvest total, but Lake Bouef WMA yields the most rabbits per hunter effort.

“Overall, we expect this rabbit season to be on par with past seasons,” McDonald said. “There have been no significant impacts since last season that we would consider detrimental to the upcoming rabbit season.” 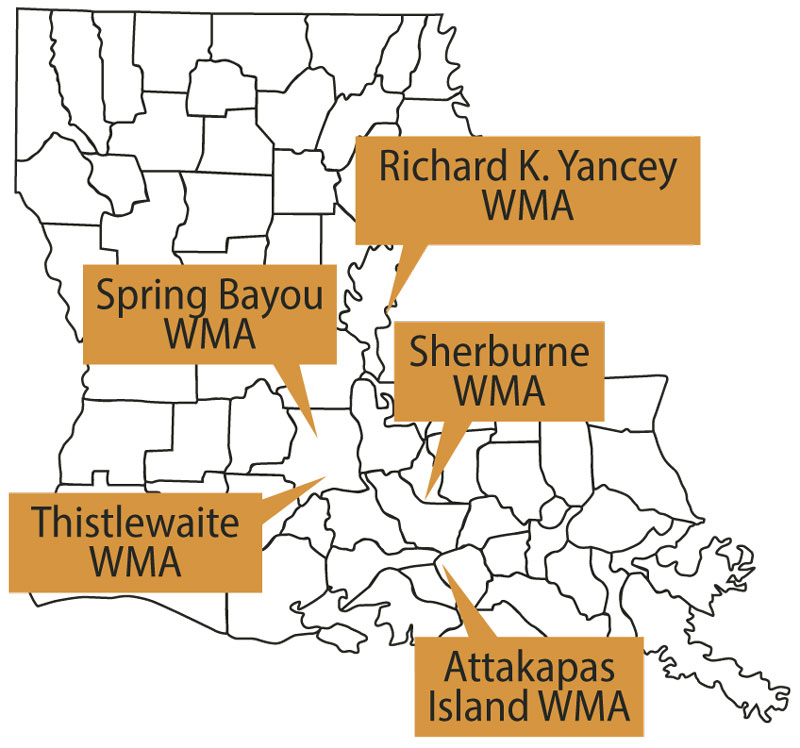 Richard K. Yancey WMA’s immense size harbors good stands of oaks, which have been producing more than enough mast. Other conditions point to another outstanding season.

“There was minimal hurricane damage on this WMA during last year’s storm season, so this should not be a factor. Flooding on the WMA was also minimal this spring and summer, so flooding was not a factor in flooding timber or having an adverse effect on mast productions,” said biologist Tony Vidrine.

Sherburne WMA saw a decrease in squirrel harvest in 2020-21. Vidrine expects hunter success to be back to normal in 2021-22. Favorable mast production and the lack of hurricane damage and minimal flooding are preseason positives there.

Vidrine points rabbit hunters to Sherburne WMA and Richard K. Yancey WMA, where seasons have been expanded. Because rabbit populations are dependent on habitat, more rabbits should be on the ground. The former has recent timber cutting going for it, while the latter has a diversity of prime habitat for rabbits. The lack of flooding and no hurricane damage is a good combination for rabbits. 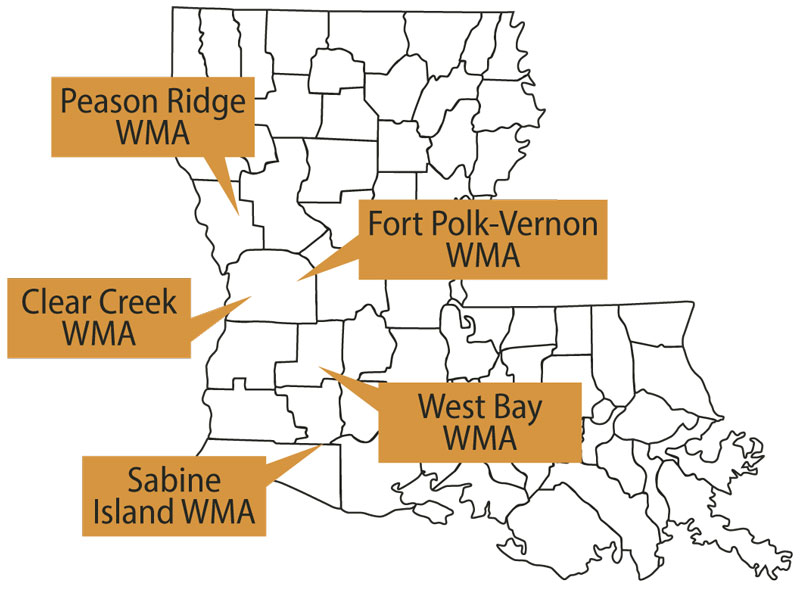 West Bay WMA presents perhaps the region’s best opportunity to bring down squirrels, according to biologist Wendell Smith of LDWF. It’s a long WMA with a myriad of creeks running through it and plenty of mast-producing trees. On the north end  — south of Interstate 10 —  there are more hardwoods. The WMA’s bottomland hardwoods are full of cat squirrels. The key to success is scouting the creek bottoms, according to biologist Wendell Smith.

Clear Creek WMA, at more than 52,000 acres, has the ingredients for successful rabbit hunting: minimal pressure, prescribed burns to produce excellent early successional habitat, robust pine plantations, rolling hills and many draws, according to Smith. As a result, the upcoming season’s outlook is promising for Clear Creek WMA. So are the prospects for West Bay WMA and Peason Ridge WMA. 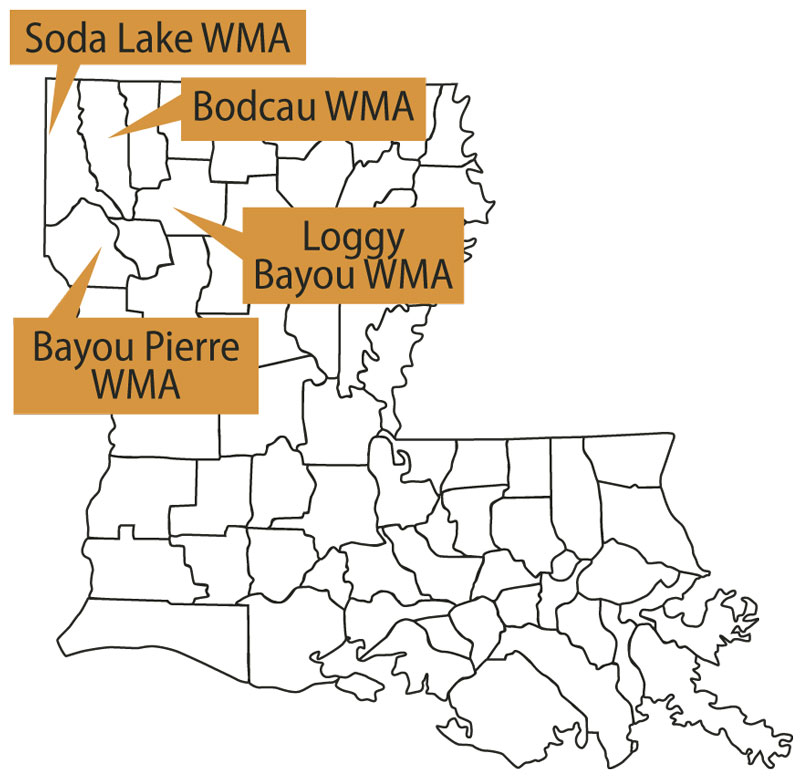 Minden Region WMAs have experienced a fairly mild summer, sufficient rainfall and were out of harm’s way from 2020’s hurricanes.

That combination is reason for optimism entering the small-game season, which opens Oct. 2. Such optimism shouldn’t be tempered by bitterly cold winter weather and flooding on both Bodcau WMA and Loggy Bayou WMA, the top two squirrel hunting areas in the region.

“We did have some significant winter weather this year,” said biologist Jeff Johnson of LDWF, “but things have been good since that time. We’ve had some flooding on Bodcau and Loggy, but nothing outside the norm for these WMAs. We were lucky to be far enough north and west that our WMAs in this region didn’t have any significant impacts related to hurricanes.”

Bodcau WMA has a variety of habitat beneficial to squirrels, including vast acreage of hardwood bottomlands and small drainages that feed into Bodcau Bayou. Mast-producing trees line those feeder creeks. There also is mixed pine/hardwood habitat in the more upland areas.

Rabbit hunting prospects are best on Loggy Bayou WMA and Bayou Pierre WMA. Habitat conditions on both areas should be fairly good due to plenty of rain during a fairly mild summer. 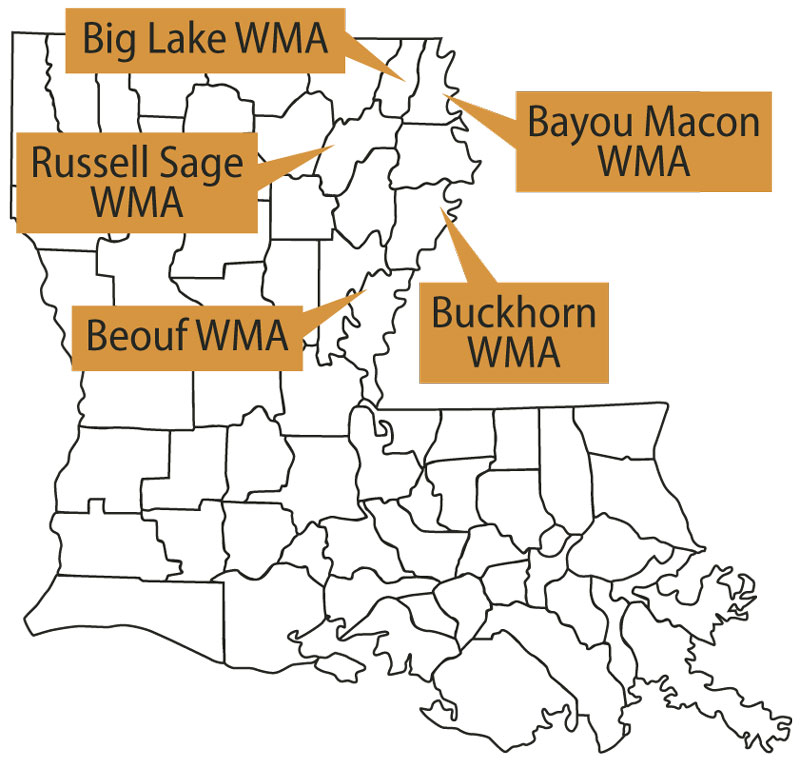 Louisiana squirrel hunting could be at its best this season on several areas in the Monroe Region.

Hunters who enjoy woods hunting in its purest form gravitate to Big Lake WMA, a 19,231-acre area with mature bottomland hardwoods and access across the WMA. Hunters had plenty of success there in 2020-21, and it looks like more of the same this season, according to Mitch McGee, an LDWF biologist.

McGee labeled last season as “excellent,” with many squirrels bagged from near Hog Lake, around Buckshot Trail and off Roaring Bayou.

Other top squirrel harvests in his region were at Boeuf WMA and Russell Sage WMA. The former features soft and hard mast-producing trees, as well as many “cavity trees” that biologists try to save to harbor wildlife.

Spring flooding the past few years has been the bane of rabbit populations in the Monroe Region, McGee said. He’s hopeful this year’s rabbit numbers will bounce back and be more prolific.

Russell Sage WMA and Boeuf WMAs should offer fair hunting for rabbits in those reforested areas that have plenty of ground cover with briars. 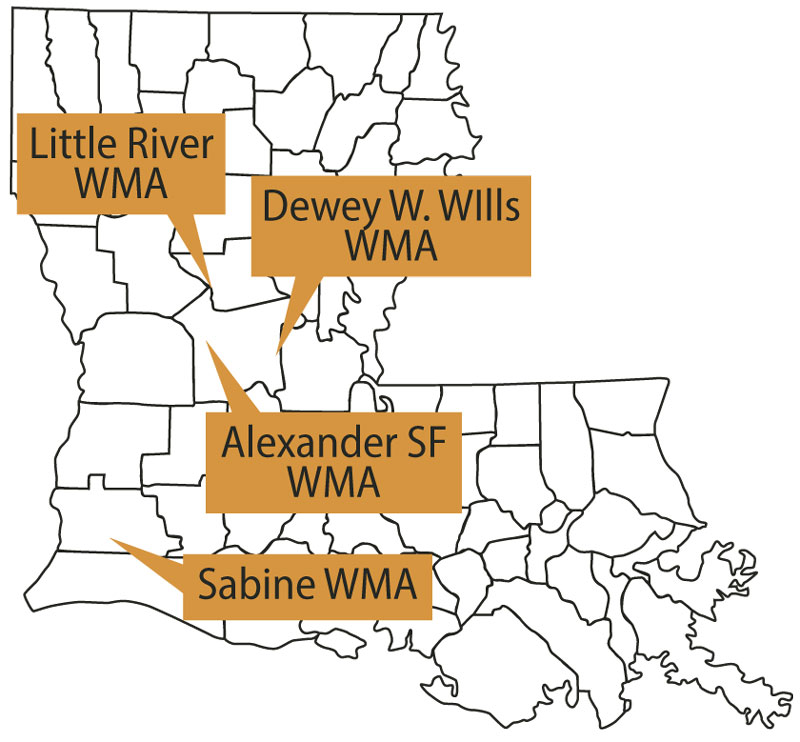 Dailey said some of those callers were from Avoyelles and Pointe Coupee parishes who hunt Richard K. Yancey WMA in the Lafayette Region. Apparently, they wanted to hunt squirrels in an area that gave up the state’s second-highest harvest in 2020-21.

“Yeah, there’s a big squirrel effort out there every year. There’s a lot of private camps within and along Dewey Wills and public campsites inside,” Dailey said. “They fill up every opening weekend. Everybody comes out and camps.”

Dailey doesn’t anticipate any dropoff from the 4,583 squirrels harvested during 2020-21.

“The mast crop on these areas has been slightly above average in recent years, equating to good recruitment of young to the population,” Dailey said.

Dewey W. Wills WMA’s prime squirrel hunting areas include the Greentree on the south end near Saline Lake, along Muddy Bayou north of the Diversion Canal, and along Big Ridge Road.

He pointed out that Dewey W. Wills WMA has a “Small Game Emphasis Area” allowing squirrel hunters to bring their dog(s) to tree squirrels for the first part of the season. That area, covering about 500 acres, is on the west side of LA 28 to south of the Diversion Canal all the way to the area’s southernmost boundary.

Most of the region’s rabbit-hunting success is on Sabine WMA, which features replanted clearcuts that provide good rabbit habitat and browse, and Dewey W. Wills WMA.

A large part of Sabine WMA has undergone either a clearcut or thinning within the past three years, a process that provides an abundance of escape cover and early successional food plats that help rabbits thrive.

With no place to go but up, Louisiana’s January duck numbers rebounded from the paltry numbers observed in the December survey. […]

As the years race past, outdoor memories grow fonder

As time has passed, Kinny Haddox has grown to love writing about the outdoors and fantastic people as much as he enjoys hunting and fishing. […]

Before you start looking for your next “hunting partner,” here are a couple of things to consider when getting a hunting dog. […]

About Don Shoopman 450 Articles
Don Shoopman fishes for freshwater and saltwater species mostly in and around the Atchafalaya Basin and Vermilion Bay. He moved to the Sportsman’s Paradise in 1976, and he and his wife June live in New Iberia. They have two grown sons.