What does the season hold for public- and private-land hunters in the Monroe Region who pursue deer, ducks and small-game species this fall and winter?

If ducks head this far south in numbers this season, the sky is the limit for waterfowl hunting prospects on Russell Sage WMA.

Mitch McGee, an LDWF biologist, said much of the duck hunters’ attention will be focused on Wham Brake, a carefully managed, 3,000-acre wetlands-restoration project acquired by LDWF in June 2013.

A drawdown for a third-straight year has been initiated there, and it has been successful, McGee said.

“It’s doing good. Hopefully, we’ll have teal water in there for (the special teal season in September),” he said.

Wham Brake will likely be extra crowded with waterfowlers during teal season, he said, because many of the region’s private duck-hunting leases usually don’t have water on them in September. By the time the regular waterfowl season opens, however, there’s more water across the region, and that spreads duck hunters out across private lands, as well as Russell Sage WMA, particularly Wham Brake. Often, hunters bring down more ducks from mid-morning on, after the crowd thins out at the WMA, McGee said.

Most of the duck-hunting success is in potholes in the grass and coffee beans along the northern shoreline when the water’s high, but when it’s low, there are more ducks killed in the open areas of Wham Brake, McGee said.

How the table is set

On DMAP private lands, John Hanks, the region’s private-lands biologist supervisor, said most of the region was 10 to 12 inches above average rainfall levels in July.

“A lot depends on rainfall throughout the summer,” he said. 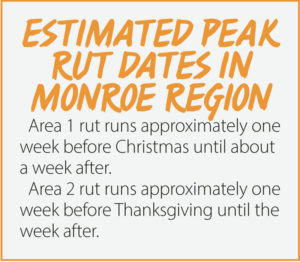 Deer browse availability and reproduction probably were impacted last summer by the Ouachita River, which was very high, and floodwaters that stayed for a record time on herds along the Mississippi River. Area 1’s fawns were born in early July, because the rut is a little later than it is in Area 2, where he and others were seeing fawns on the ground several weeks earlier.

For WMAs, deer reproduction was down in the batture last year because of the height of the Mississippi River, McGee said. The Mississippi, Ouachita, Tensas and Boeuf rivers were high again this spring; the area has had average rainfall through mid-July.

“It seems like we’re dealing with high water every year,” he said.

Deer have been eating alligator weed in ditches and depressions because habitat has been wet. Deer ought to “really respond” to browse conditions on Bayou Macon WMA, where a timber sale has been completed, he said, and over the past two to three years, habitat has improved “quite a bit.” 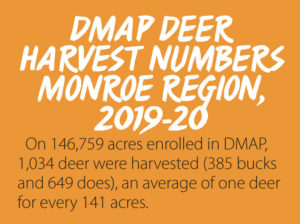 On DMAP private lands, Hanks anticipates something along the lines of last season, when 385 bucks and 649 does were harvested on 146,759 acres enrolled in DMAP.

For WMAs, McGee ranks deer hunting in the region an 8 for overall harvest numbers as a result of intensive management efforts and fair to good habitat. He pointed out the WMAs benefit from extensive forest cover in Area 2 and a large agricultural component in Area 1.

“We should have a good deer season shaping up,” he said.

For WMAs, McGee ranks the harvest of quality deer as high as 8 because of intensive management and fair to good habitat in the Monroe Region. Several Boone & Crockett-class bucks were harvested last season on Buckhorn WMA, he pointed out.

One of the leading WMAs in north Louisiana is Russell Sage, which gives duck hunters access to more than 4,800 moist-soil units, including Wham Brake’s 2,767 acres of flooded agriculture areas and approximately 1,800 acres of passively managed natural swamp and sloughs, plus acreage typically not managed for waterfowl that has the potential to hold ducks given the WMA’s flood potential.

How many ducks were harvested on Russell Sage in 2019-20? McGee’s report indicated 4,831 hunters killed 7,500 ducks. The other top duck destination in the region is Boeuf WMA, which provides access to more than 5,900 acres of moist-soil units, 1,900 acres of greentree reservoirs and about 5,000 acres of managed natural swamps and sloughs. Like Russell Sage, Boeuf areas not specifically managed for ducks has the potential to hold waterfowl because of its flood potential.  In 2019-20, 1,689 duck hunters harvested 3,012 ducks on Boeuf.

On DMAP private lands, last year’s mast crop was fair overall, which should lead to at least a decent season for squirrels, Hanks said.

For WMAs, the top squirrel hunting areas should be Big Lake, for sure, and Boeuf, according to McGee.  Big Lake, a 19,231-acre tract, has some of the best squirrel hunting near Hog Lake, which is chock full of old stands of trees, the Buckshot Trail area and along Roaring Bayou. Boeuf’s 51,554 acres contain many soft- and hard mast-producing trees, plus a lot of cavity trees, which managers try to save to favor wildlife.

THE KULA cooler is a high-quality, round, rotomolded cooler that offers unique benefits, […]

LDWF to offer dove lease fields in DeRidder and Colfax on Sept. 3

The LDWF will have lease fields available in DeRidder and Colfax for the opening day of dove hunting season on Sept. 3. […]