What does the season hold for public- and private-land hunters in the Coastal Lafayette Region who pursue deer, ducks and small-game species this fall and winter?

Biologist Vaughan McDonald shared his views on habitat conditions awaiting the fall flight of migrating ducks across the Coastal Lafayette Region and was upbeat about them in mid-July.

Submerged aquatic vegetation was in good shape, he reported, on the region’s duck hunting WMAs. 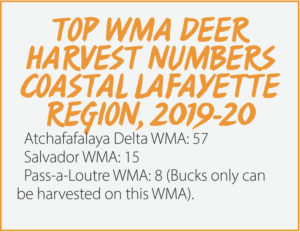 For WMAs, the lack of any major storm is a plus, as favorable weather conditions won’t negatively impact habitat conditions, McDonald reported. While deer can be found in marsh habitats, that terrain isn’t optimal to support a significant herd due to a lack of abundance of preferred forage plants, habitat deterioration and storm-related impacts.

Just like last year, the Mississippi and Atchafalaya rivers remained above flood stage into late June, affecting submerged aquatic vegetation production on Pass-a-Loutre and Atchafalaya Delta WMAs. However, those areas should rebound once the rivers fall to normal levels and water clarity improves. Remaining WMAs are showing average SAV production, and barring any weather events, the status should hold throughout the growing season and into the early part of the hunting season. 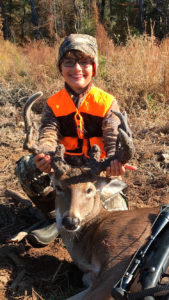 McDonald rates deer hunting in the region a 6 out of 10. While deer can be found in marsh habitats, McDonald points out that most of the public areas are relatively close to forested areas with higher natural ridges and spoil banks, but even those areas limited. At the Atchafafalaya Delta WMA, where it’s archery hunting-only, 11 of the 57 deer killed last season were taken during the youth lottery hunts on the second and third weekends of October. The WMA’s five-year average harvest is 170 deer, a number that has been trending lower each of the past few seasons. At Pass-a-Loutre WMA, deer-hunting participation can be low because of its remoteness and accessibility, but it is a “great place to hunt deer” for those who are willing to put in the effort on an area where shooting lanes are maintained at the reservoir and wildlife openings across the WMA. 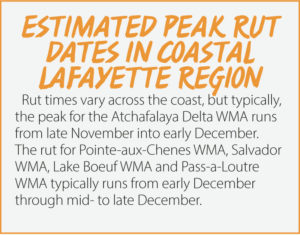 Some quality bucks are harvested every season on the Atchafalaya Delta WMA. Last season, an 11-pointer and two 10-point bucks were harvested. In 2018-19, six deer had at least one antler base circumference of 4 inches-plus, and 12 deer were 8- to 10-pointers. Pass-a-Loutre historically is the second-best bet to harvest a trophy deer; only bucks can be harvested there.

McDonald reports that waterfowl hunting is by far the most-popular hunting activity on his region’s WMAs, namely Pass-A-Loutre, Salvador/Timken, Lake Boeuf, Pointe-aux-Chenes and Atchafalaya Delta. Overall, there have been few, if any, environmental events affecting the region this spring to have a significant impact in those areas, the biologist manager said.

Favorable habitat conditions continue to improve each of the past few years on Pointe-aux-Chenes WMA and Lake Bouef WMAs, the only coastal WMAs with significant squirrel populations. The squirrel hunting hotspot on the former is the Point Farm Unit, which covers almost 1,500 acres and features forested habitat and more than 500 acres of hardwood trees planted in previous mitigation projects. McDonald and other LDWF personnel also maintain shooting/access lanes to enhance conditions for squirrels and squirrel hunters.