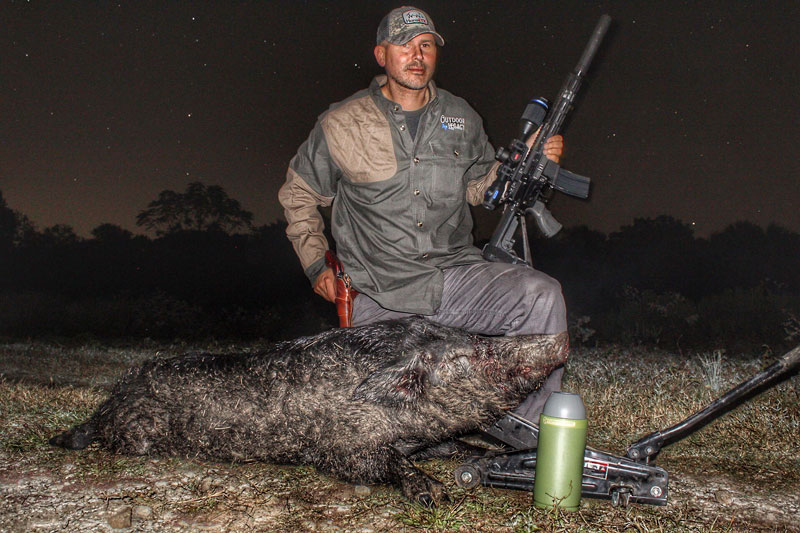 Don’t leave vocalization out of your bag of tricks when it comes to hunting wild hogs.

The phrase makes the masses cringe. Hated and hunted by farmers, landowners, deer hunters and many others. Hunting hogs day and night has become extremely popular and necessary to keep the population in check.

They are smart, secretive, adaptive and, due to their rapid breeding, they have become probably the greatest emerging wildlife challenge the Southeast will face in the 21stcentury.

Can a hog be called? Some say yea; others say nay. It does work and creates another aspect to hunting wild hogs. Calling is one more tool hog hunters can add to their arsenal of tactics to help battle the increasing swine population.

“It’s absolutely true that you can call in hogs,” said Joel “Hans” Miller of the HansETX YouTube channel. “I have been doing it successfully for the last 10 years and do it most every night.”

Incorporate calling into your hog-hunting routines. Whether you check agricultural fields by day or are a night hunter equipped with thermal and night vision, give calling a try before ending the hunt or moving to other ground.

“It’s not going to replace traditional spot-and-stalk hunting, but rather complements it,” said Miller, from Ben Wheeler, Texas.

After a hog hunter has exhausted all other tactics, whether it is spotting and stalking or still-hunting over bait, calling should be given a chance. Calling hogs is similar to the way coyote hunters target their quarry.

A few hand calls like the Primos Hog Squealer or a grunter like Knight & Hale’s Wild Hog Call can get the job done. An electronic caller is more expensive but a better option, as many hog sounds are available to pair with the call for realistic sounds. Some of these sounds are actual recorded live hog sounds.

Place electronic calls no more than 30 or 40 yards away. Try some of the tactics below and start calling.

Hogs have an exceptional sense of smell. When setting up to call, wind direction should be considered. Set up and call where you think the hogs will approach from either upwind or cross-wind. Hunt the wind just as if you were hunting deer.

It’s a myth that hogs can’t see. Their eyesight is very similar to humans. Hide well to avoid being seen, especially during daytime, and tuck away in the shadows at night.

Wild hogs hear well, too. Be quiet while entering an area, as they will be less likely to respond if they have heard a loud truck, an ATV, or human voices.

Target areas where you find hog sign or where you have seen hogs. Fields or food plots with wallows, open areas next to bedding thickets, logging trails near swamps and along waterways are good places to start.

“I always commit to giving it least 15 minutes to work,” he said. “I start out with a low volume and a non-aggressive type call like Convergent Game Calls’ ‘sound the rally.’ If that doesn’t work, I will move to something more aggressive like sow in distress or aggressive boar and with more volume.”

Hogs are not naturally nocturnal animals, but they quickly turn nocturnal when pressured or close to human activity. This has made thermal and night-vision hog hunting very productive, and this includes calling them in.

There is no silver bullet when it comes to calling in and killing hogs. As a matter of fact, hunters are just as likely to scare away hogs as they are to attract them.

“You are more likely to call in a lone boar or an aggressive sow. It’s usually the alpha hog in a group that will respond to calling,” Miller said. “You can easily scare off a group of adolescents, but if there is an alpha in the group, the whole sounder will usually follow the dominant one.”

When targeting wild hogs give calling a try before leaving. You could call in a hog you never knew was there or you may call in a hog from other properties that you can’t hunt.

“Calling hogs has given me many shot opportunities that otherwise I would have never had,” Miller said.

Sometimes you will have success, and sometimes you will not. In one sense it’s a lot like calling predators or turkeys, it works best when strategically used in areas with lots of hogs. However, the times when it does work, the results are incredible.

Sign Up Now
About Andy Douglas 13 Articles
Andy Douglas is an outdoor writer and photographer from Brookhaven, Miss. A native of Lincoln County, he’s chased deer, turkeys, bass and most anything else the past 35 years. He lives the outdoor lifestyle and is passionate about sharing that with others through stories and photos.