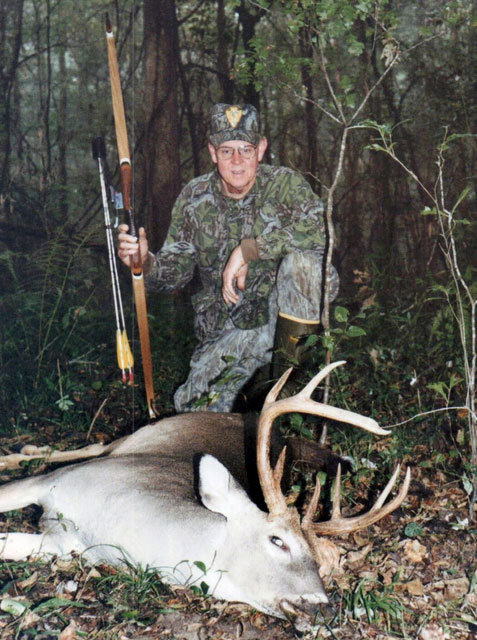 After a long morning hunt, with no sightings, I relocated 10 miles to an area that I knew had some Cherrybark oaks. In past seasons, they have produced some exciting hunts. Earlier in the season I had scouted them using binoculars, and knew they had acorns. Checking my records, for the dates of kills in that area, I knew that now was the drop time for the acorns.

I was really late getting to the Cherrybark oaks, and didn’t get my stand set up until 4:10 p.m. I had found a tree that was ready with lots of deer sign inside the drip line of its crown, and the acorns were raining. It was an overcast day so I knew I didn’t have much daylight left and actually felt like I was just wasting my time, but I hoped for the best.

I was only in the tree for 10 minutes, when two does came in from the opposite side of the feed tree from me. The lead doe spooked when she made her way to where I had circled the tree, checking for fresh sign, before climbing. Lucky for me I wasn’t able to get a shot. At last light I heard another deer coming in. Since I was already standing, I only had to shift my position slightly for the shot.

I couldn’t help but notice how large the deer was and as soon as it cleared some trees, I took a 20 yard broadside shot with my Acadian Woods recurve. Even in the low light I was able to watch the arrow all the way to the deer and the arrow placement looked too far back. And, the sound of the hit was more like a hollow thump instead of the familiar rib cage thump….. making me believe that I had a gut shot.

When I got down I couldn’t find my arrow or any blood, but I had taken a good solid compass bearing on the way the deer had ran off. I unsuccessfully looked for blood for about 30 minutes, then decided to spend the night in my truck, where it was parked, and try to find the deer in the morning.

At good daylight, the next morning, I was back at the site of the hit. From the arrow’s impact I started running the compass bearing that the deer left on as true as I could. After 10 minutes, on the original bearing, I saw a white belly on the ground 20 yards to the right of my bearing. It was an 8-point and he had indeed been gut shot. Cutting a plug of meat from the inside of a hindquarter and smelling it confirmed that the buck wasn’t spoiled. When I stepped off the distance traveled, I found he had gone 275 yards.

After pictures, video show and tell and field quartering I was ready for the 30 minute pack-out.

Adam Chiras killed this Vernon Parish 10-point on Oct. 25 from his lease on the south side of Annacoco Lake. […]