Deer hunters are faced with decisions on pulling the trigger all the time. What should go into those decisions? Here are some ideas.

It is probably safe to say that most hunters are looking for a good buck to shoot and perhaps hang on the wall. Yes, there are still hunters who are just looking to put venison in the freezer, and that’s perfectly fine, but I think, deep down, there is a desire to harvest a really good buck — maybe not a Boone & Crockett trophy, but one that makes the heart stop when you see it.

Hunters are the management tool that game agencies use to manage deer populations. Seasons are set to provide the needed opportunity to keep the herd in balance with the habitat. A glance at Louisiana’s deer regulations points this out; the bag limit has been changed to directed the harvest at both bucks and does, done to reduce the hunting pressure on bucks and to increase the age in buck populations. No longer can a hunter harvest six bucks, unless he breaks the law. Some areas in the state have a reduced limit in an effort to increase deer numbers.

Louisiana has a long deer season, longer than many other states. The weather is influenced greatly by the Gulf Coast, and winter may or may not happen. States with short deer seasons generally have a distinct winter, and the winter weather can impact both the herd and the habitat. Under those conditions, it can be fairly easy to pattern deer and their movement. In this state, when it can be 85 degrees in December, patterning deer can be quite challenging.

With a long season, it’s easy to think hunters should be able to fill their allotment of tags, but most are regulated by faith, family and football during hunting season, and time in the field is often limited. Combine these activities with the periods of bad weather, and time in the woods when deer are actually moving may be limited. Consequently, when a deer walks out, hunters may be anxious to pull the trigger. But club or landowner rules, along with the hunter’s maturity level, often override a quick trigger finger, and much thought goes into the decision to shoot or not to shoot.

This edition of “Shoot, Don’t Shoot” reflects the thinking that goes into the decision to pull the trigger. Look at the deer and decide what decision you would make, and then read what these thought processes may have included. Being a biologist, I am always looking at the management influence that killing a deer has on the herd and the habitat. As we have learned from the past 70 years of managing and hunting deer, the gun can have an impact on the herd. Heavy bucks-only hunting results in herds with a high percentage of young bucks and a high population of does. The reduced buck limit has helped increase the number of bucks in older age classes.

1 A nice-looking, adult doe on the alert is standing in your green patch on opening day. Do you shoot? 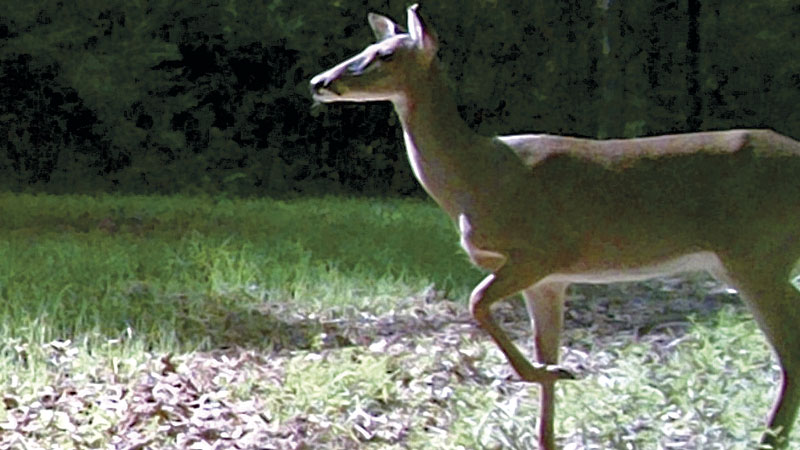 The thought process: The daily limit is one buck and one doe. Here is a nice, adult doe; maybe a buck is nearby, maybe not. You know you need to harvest some does from the landscape, and here is your chance. Shoot and wait for the buck. Notice the neck on this adult doe, a distinct neck; young bucks, one and two years old have this same, distinct neck look.

2. This small forkhorn buck that you have gotten photos from your trail camera shows up at the feeder. Shoot or don’t shoot? 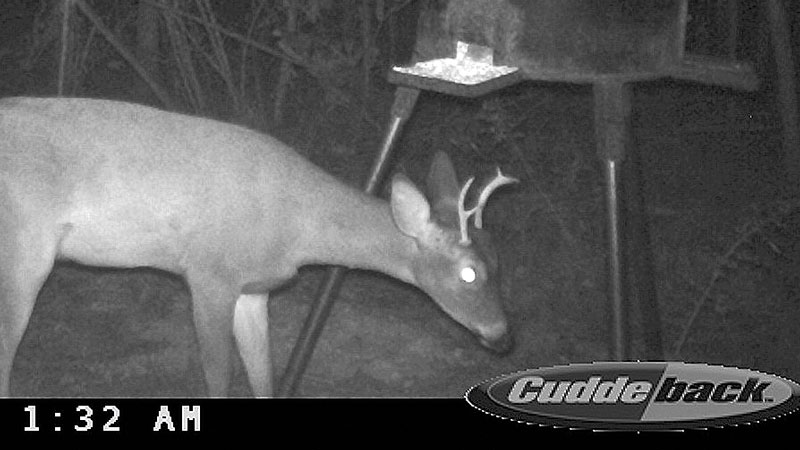 The thought process: Note the neck, very similar to the neck of a doe; this is a young buck that will get bigger. Veteran hunters pass on the shot; young hunters may shoot, hungry hunters will shoot.

3. An adult doe with twin fawns comes out in the right-of-way one morning. Do you shoot one of these deer?

4. This small buck with a broken rack comes out to feed at the Buck Bait. You notice the right beam is broken. Do you shoot? 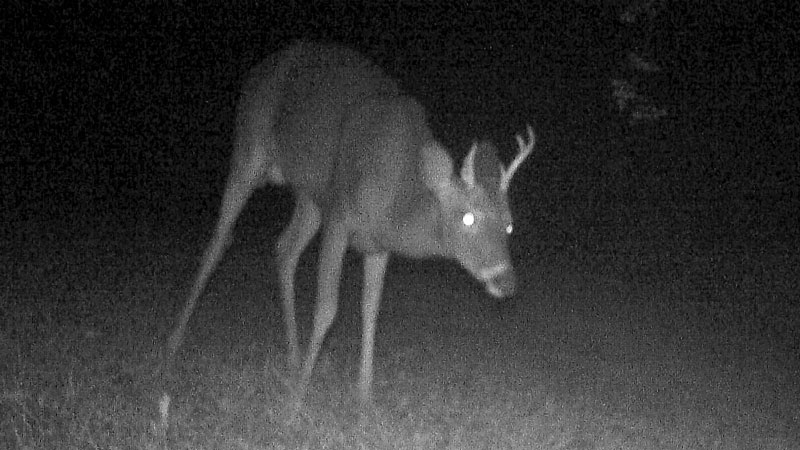 The thought process: It is not uncommon for bucks to damage their antlers while in velvet. This is a young deer; pass on it and let it grow.

5. As they always do, a nubby buck comes out 30 minutes before dark. What will you do? 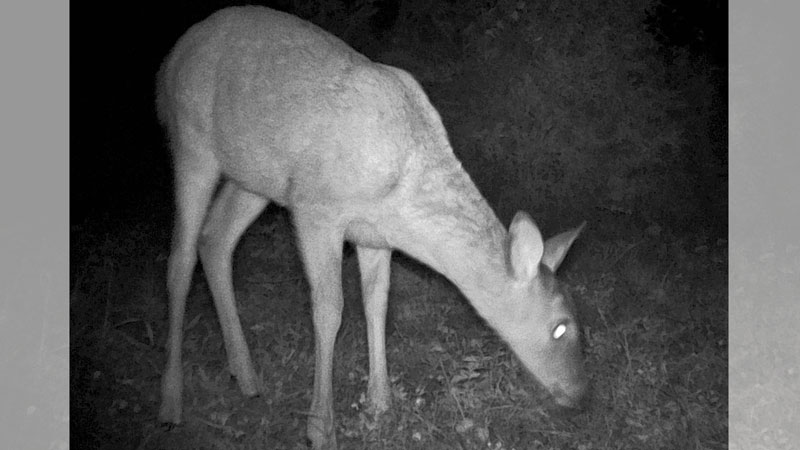 The thought process: Nubby bucks are young and dumb and always come out in the plot first. It is six months old and will produce its first rack next year, let it go and grow, but if you do shoot it, the world will not stop turning and you have not ruined the management program.

6. A deer is crossing the right-of-way about 150 yards away. What will you do? 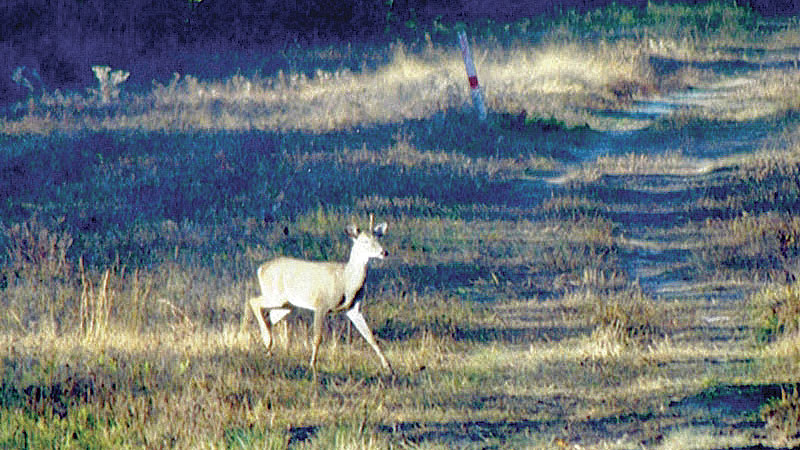 The thought process: The first thing to do is grab the field glasses and see what it is. The neck says it is a young buck or a doe; the spike antlers tell you it is a 1½-year-old buck. If you let it grow, it will be bigger next year. If you shoot, be sure you have a solid rest!

7. A nice buck walks out, alert and looking around. What to do? 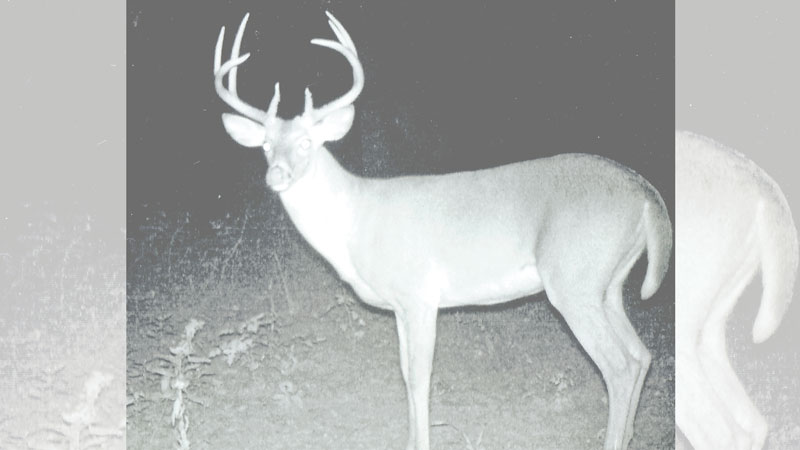 The thought process: This is a good, adult buck. The neck looks like it blends in with the body and is not distinct like that of a doe. The G2s and G3s on this buck are long, exactly what a hunter is looking for, not a big spread, but long beams. This deer could score around 130 and is a good one for the wall.

8. A deer hunter’s delight: two racked bucks from which to choose. Which one will you choose? 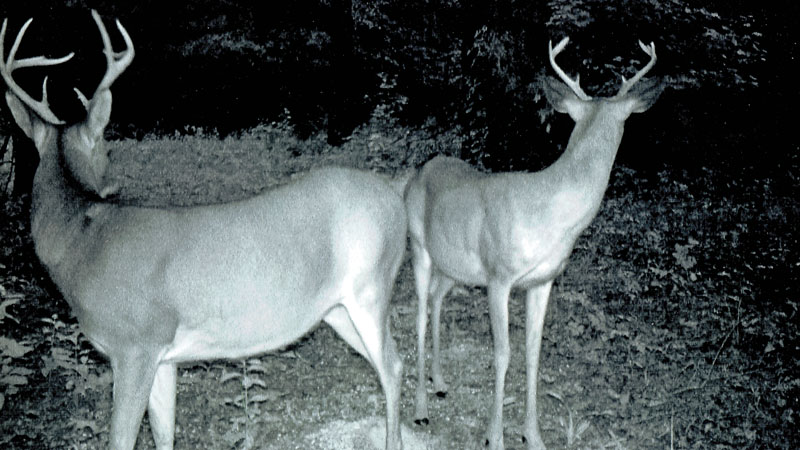 The thought process: Both of these are young, adult bucks, and both appear to have potential as they grow older. Most hunters would not mount either one unless it was a first buck. I would suggest that you don’t spend the money to mount it; just make a skull mount, but the better decision would be to pass on them.

9. What in the world is this? Someone has lost their pet deer. What are you going to do? 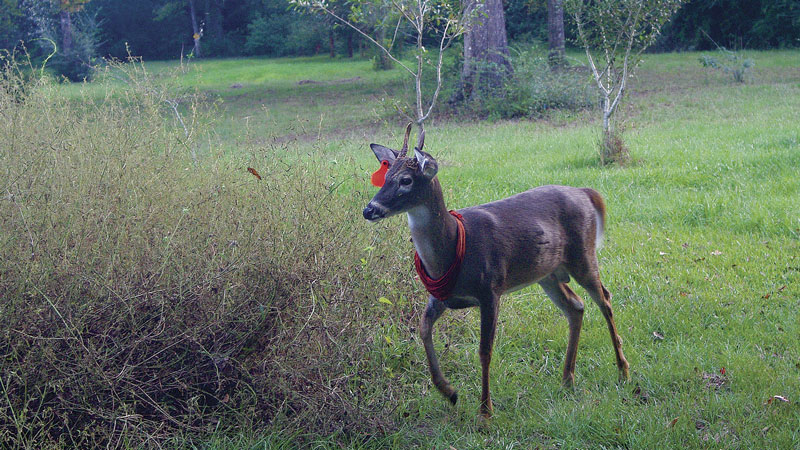 The thought process: Obviously, someone caught this deer as a fawn, raised it and then turned it loose. This is a biologist’s nightmare, an illegal deer taken from the wild, and a potential threat to humans since it is not afraid of people. Shoot it, and call the Louisiana Department of Wildlife and Fisheries so it can get blood and brain samples for testing. 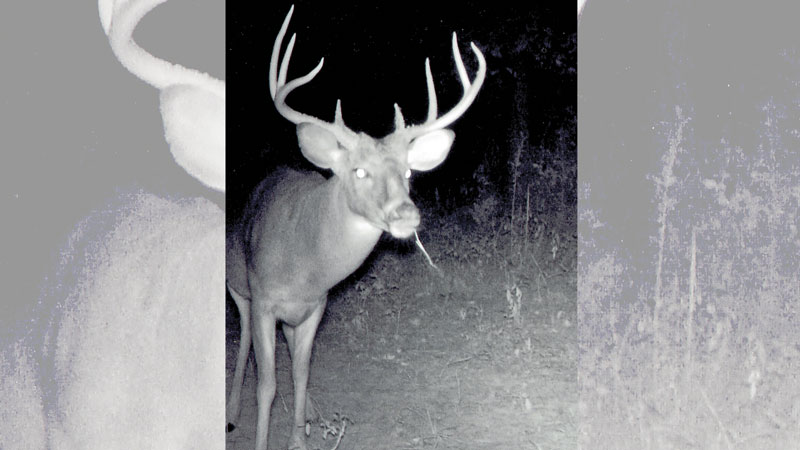 The thought process: Another wall-hanger; an 8-point with a nice 17- or 18-inch inside spread. This is what you dreamed about; shoot it.