Biologists point deer hunters to a double-handful of Louisiana WMAs for great action this season.

Watching the world wake up, knowing you prepared and planned as much as possible and scouted diligently, is part of the reward on a deer hunt.

A bowhunter watching varying shades of grays change to all colors of the rainbow in the predawn magnifies all that 10 times. Hunting on any of the thousands of acres of public land across Louisiana makes the experience special, more meaningful.

A growing number of bowhunters is sharing the challenges of hunting on WMAs, according to biologists Wendell Smith of the Louisiana Department of Wildlife and Fisheries. They see it every season.

Smith, manager of the Lake Charles Region, said in mid-July, “They’re already getting excited about bowhunting and scouting. They love it, and they’re hard-core,”

As many as 400 bowhunters converge on Clear Creek WMA the first weekend they get a chance to hunt each season, Smith said. Many are from southwest Louisiana; they know each other and share information on social media: Facebook-Clear Creek WMA Hunters.

Biologist Mitch McGee, who manages the Monroe Region, has seen similar kinship among bowhunters in his region. Interest remains high.

“I would say it hasn’t decreased any. There’s a big community of strictly bowhunters,” McGee said.

Here’s a look at the upcoming deer season on WMAs around Louisiana. 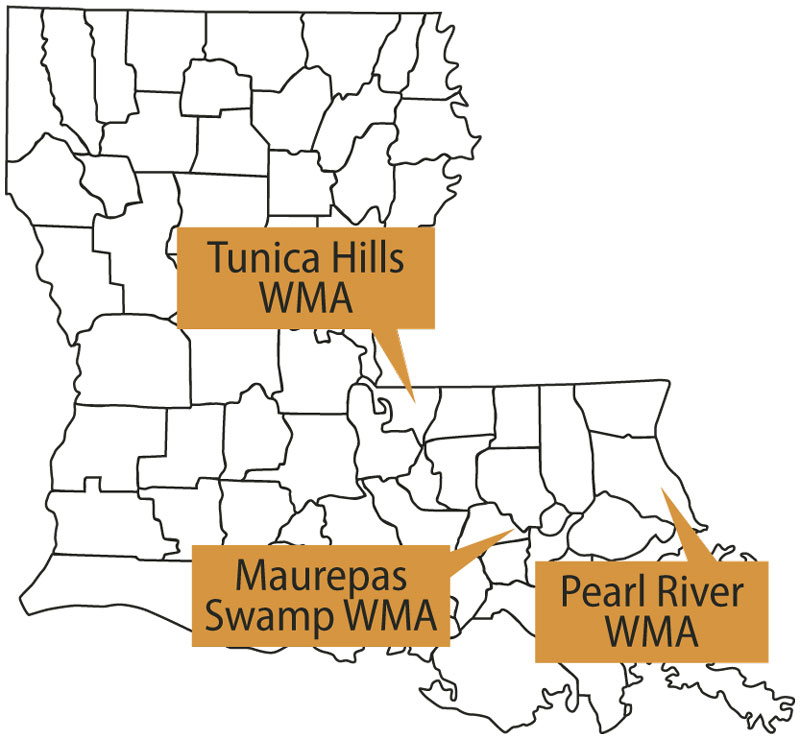 As hunters prepare for the season on Maurepas Swamp WMA, LDWF biologists advise that a levee system is being built by the U.S. Army Corps of Engineers. Biologist Jillian Day emphasized that construction is ongoing, and safety precautions must be practiced by all hunters who use the WMA.

“There are going to be workers out pretty much across the southern boundary of the property from just east of Highway 51 to I-55 and I-10, and Hope Canal on the west,” said biologist Brad Breland.

Day and Breland agree while Maurepas Swamp WMA is immense, and most of it is difficult to access, which means deer receive less pressure than smaller, more accessible WMAs.

With plenty of roads and trails in the northern section, Pearl River is one of the most accessible WMAs in the region. It gets more pressure because of its proximity to New Orleans, but still not a “tremendous amount,” Breland said.

Overall habitat conditions in the region were favorable, they reported. Fawns were just hitting the ground in early July, and they are hoping there won’t be a major flooding event. 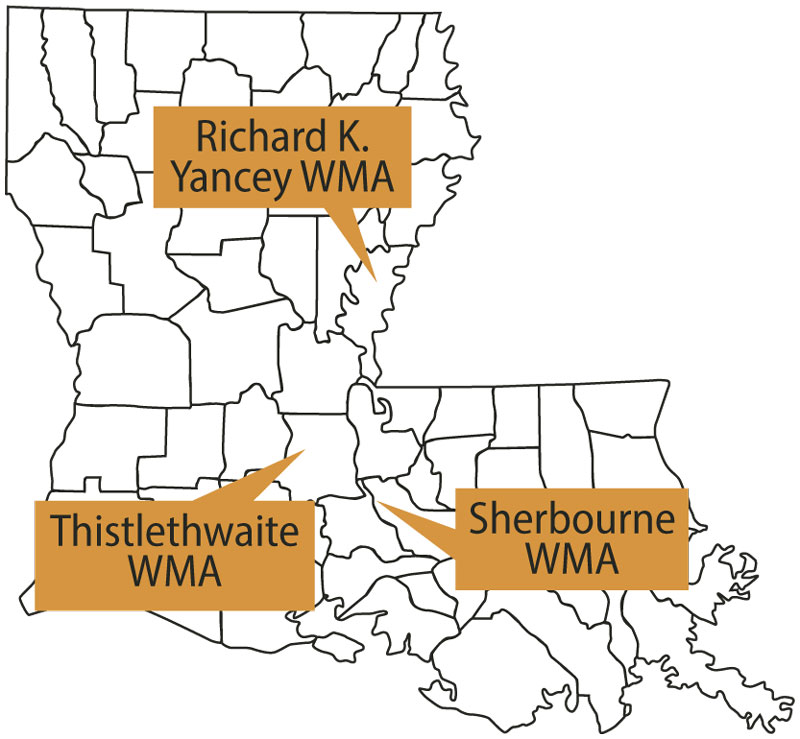 Thistlethwaite WMA has so many resident deer that more hunting opportunities have been added to the 2021-22 season.

“It has a high-density herd. There are a lot of deer in there right now. That’s why we increased the season, to try to take more deer out of there,” said biologist Tony Vidrine, Lafayette Region manager, who is quick to point out the area isn’t overpopulated.

Total harvest numbers don’t make those of some larger WMAs, but the deer-per-acre harvest was phenomenal last season on Thistlewaite, where one deer per 57 acres was killed compared to one deer per 122 acres on Sherburne WMA and one deer per 314 acres on sprawling Richard K. Yancey WMA.

Thistlethwaite’s herd thrives on many natural groceries. Logging practices past and present, plus two hurricanes, have created excellent habitat, Vidrine said. Above-average rainfall has generated a lush understory, and mast production was moderate to high the past few years.

“We are expecting another excellent harvest on this WMA,” Vidrene said. “Thistlethwaite is a popular area for bowhunting. A lot of bowhunters for some reason like to bowhunt that area.”

Browse availability on Sherburne has been enhanced by logging by the U.S. Fish & Wildlife Service, Vidrine said, noting LDWF has scheduled more logging. Two 2020 hurricanes improved habitat conditions, the acorn production has been high for a few years, and the area wasn’t impacted by flooding.

“They’ve got a lot of land to cover. The deer herd’s doing well in there,” Vidrene said. 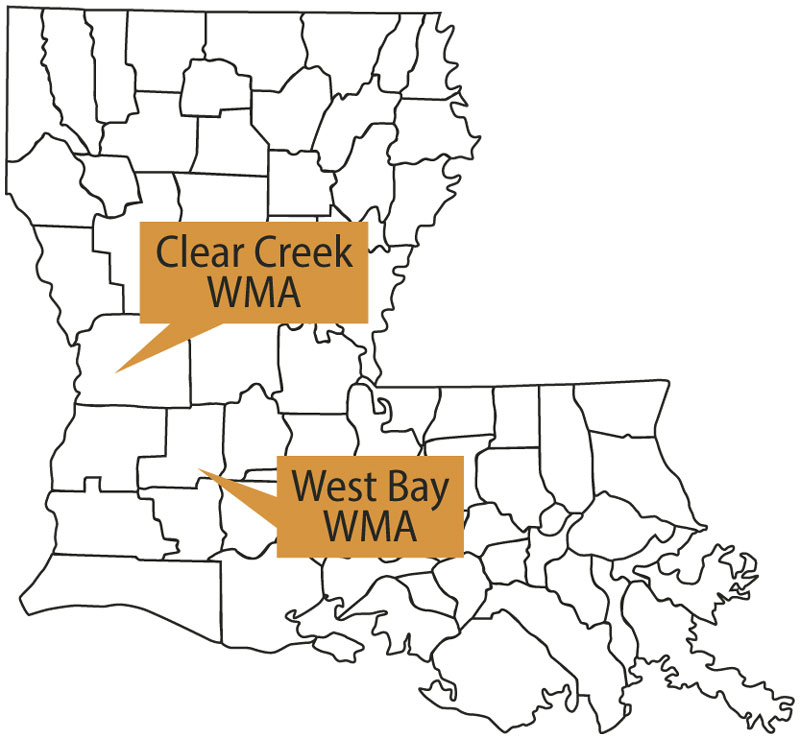 Deer prove time and time again they can adapt to natural disasters that devastate their habitat.

Wendell Smith, biologist manager in the Lake Charles Region, is confident they’ll rebound after the area was smashed by two hurricanes in a two-month span in 2020. Is he concerned about the region’s deer and rabbits?

“Oh, no … deer, they thrive on disasters like this. Mama deer are real healthy because there’s a lot of food, so they give birth to many healthy fawns,” Smith said.

Hurricanes, he said, open the forest canopy by toppling trees, allowing sunlight to reach the ground and jump-starting super growth of early successional plants that benefit deer, rabbits, quail, turkeys and songbirds. He cited Hurricane Rita in 2005 as a prime example.

“We will witness, once again, the natural progression of wildlife habitat from bare soil to forest species within a few years,” Smith said. “All (WMAs) within Region 5 suffered hurricane damage, some more than others. Hurricanes Laura and Delta caused extensive tree destruction on West Bay WMA, Sabine Island WMA and Fort Polk WMA, and caused moderate damage to Clear Creek WMA and Peason Ridge WMA. For this reason, we surmised the mast crops were mostly destroyed or heavily damaged on these WMAs.”

That Clear Creek WMA, an ultra-popular bowhunting area, was spared major damage was welcome news to hundreds of bowhunters who frequent it every season.

“There’s a large contingent of bowhunters who fill the campground up opening weekend,” he said. 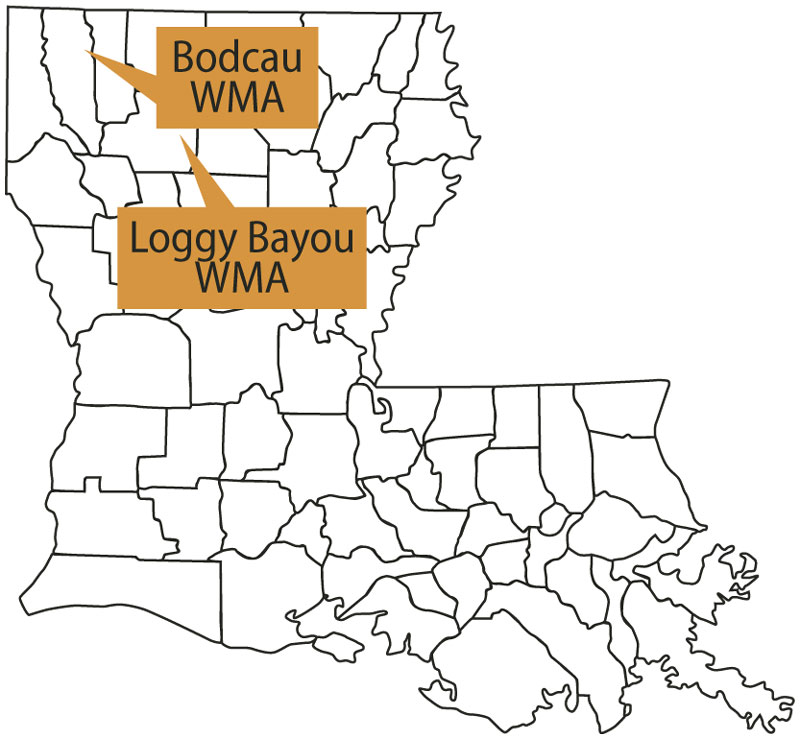 WMA deer hunters in the Minden Region should be optimistic about the upcoming season on Bodcau WMA and Loggy Bayou WMA. The table is being set just right, with consistent rainfall and fairly mild temperatures, according to biologist Jeff Johnson. Browse conditions were optimal, he said, which means antler growth, body weight and fawn survival should be above average.

The weather was rough in August 2020 after Hurricane Laura made landfall in southwest Louisiana, but there was little damage to Bodcau and Loggy Bayou, Johnson said.

“A few trees blew down on Bodcau, but it was nothing comparable to thunderstorm-related, straight-line wind damage we received on Bodcau in the summer of 2019. All that previous damage on Bodcau made access more challenging on a good bit of the WMA, but it also put sunlight on the ground. That has now turned into increased food and cover for deer.”

For bowhunters, Loggy Bayou might be a little better choice than Bodcau, he said.

The Minden Region has two archery-only public areas — Bayou Pierre WMA and Soda Lake WMA. The former is more accessible, and the latter has a few more deer but requires a lot of hiking, Johnson said. The bottom line is, bowhunters favor those WMAs because they don’t have to compete against gun hunters.

Loggy Bayou WMA’s deer herd has more density, which appeals to many bowhunters, but there is less deer hunting pressure on Soda Lake and Bayou Pierre. 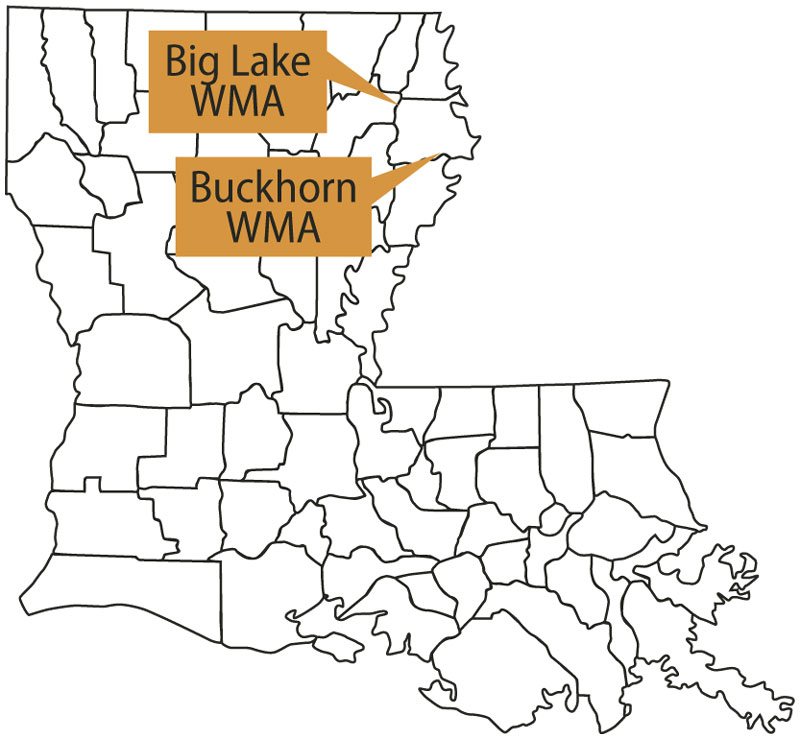 Mitch McGee, LDWF’s Monroe Region biologist supervisor, knows a good thing when he sees it — like the outlook for deer hunting across his region.

“I think we’re setting up pretty good now,” he said. “We didn’t have any major floods this spring. Conditions out there are favorable. It’s good to be a deer in the woods right now. There’s plenty to eat.”

Does dropped fawns at a steady pace in early July, he said.

“I’ve even seen triplets and a lot of twins. Lactation rates were good. I think it’ll be a real good fawning crop this year,” he said. “We’re even seeing poults. I think the turkey hatch will be fair.”

McGee has a good idea where much of the deer hunting action will be in 2021-22.

“Big Lake and Buckhorn WMAs have the most promise for the upcoming season,” he said. “Last year’s mast crop was favorable across the region, and this fall appears to be setting up for a good red oak crop, as last year’s mast survey showed numerous young red acorns formed. Hopefully, we can continue getting summer rains to maintain quality browse.”

McGee pointed out recent timber harvests on both WMAs have improved deer browse significantly. He said several high-scoring bucks have been harvested the past several years.

“I expect to see several this upcoming season,” he said.

Last year’s harvest numbers reflect the confidence he has in those two WMAs.

McGee has said in the past, Buckhorn WMA has been “underutilized” by deer hunters. The WMA’s rich soil produces high-grade browse, he said. It’s harder to hunt because of the thick, palmetto understory, and that same cover gives deer convenient escape routes.

“That gives guys a chance to hunt near a refuge,” McGee said. 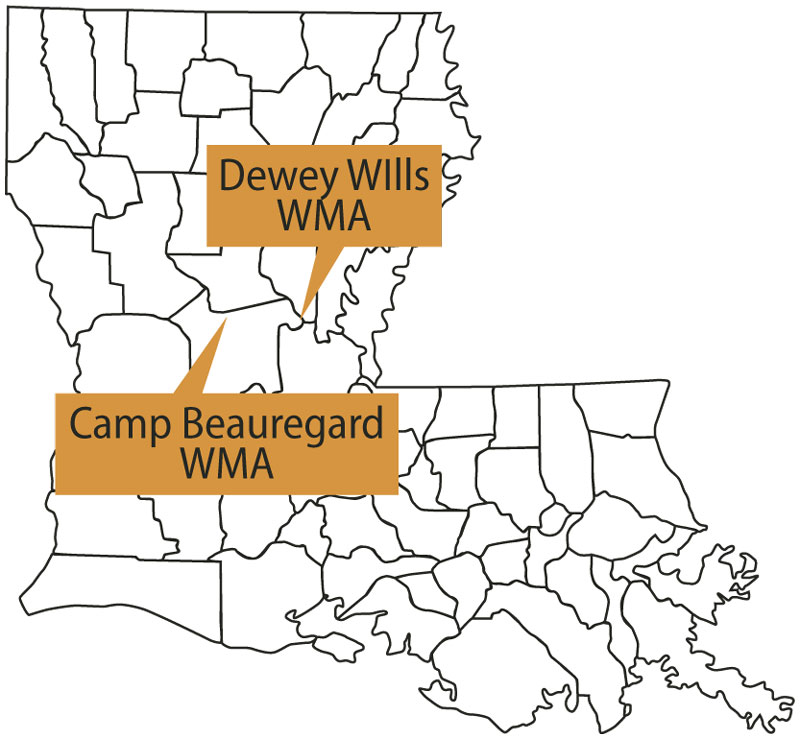 Healthy herds on Pineville Region WMAs indicate deer-hunting success should be fair to good in 2021-22. No one knows better than biologist Cliff Dailey, whose glowing optimism centers on Dewey W. Wills WMA, where 417 deer — 238 of them bucks — were harvested in 2020-21.

“Harvest numbers the past five years have been higher than average, with lactation rates of adult does being 70%-plus, which is excellent. These factors indicate that herd health and population is optimal for the area.”

Dailey said Dewey W. Wills’s mast crop the past two falls was above average, which provided the necessary nutrition for deer to get through winter healthy enough to carry fawns until birth in early summer.

“Hunters should have a good opportunity to harvest a deer this season,” he said.

If deer hunters put in the time with preseason scouting, their chance of killing a quality buck rises considerably, he said.

Peak rut on Dewey W. Wills is the first week of January.

Dailey also recommends Camp Beauregard as a top destination for deer hunters this fall. Browse conditions are favorable in that area as the result of aggressive timber-harvest rotation and prescribed burns.

There’s another reason for his positive vibe about Camp Beauregard, where a mix of upland pine areas and lower creek bottom hardwood areas appeals to deer.

“The majority of this WMA is on higher elevation, thus protected from backwater flooding that this area has received several years in a row,” he said. “I recommend this WMA for hunters who like a mixture of pine and hardwood habitat.” 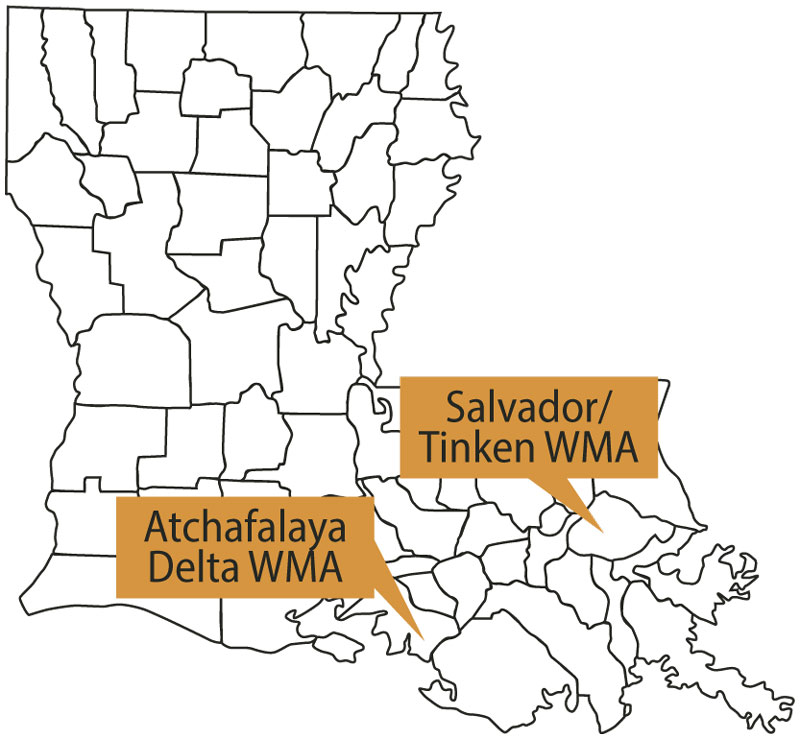 The archery-only area — with the exception of youth lottery hunts — in St. Mary Parish gave up 47 deer last season after hunters harvested 57 deer in 2019-20. Among those deer killed in 2020-21 were two 10-point bucks.

Biologists Lance Campbell and Vaughan McDonald oversee the Coastal Lafayette Region for LDWF. They agree with many deer hunters that Atchafalaya Delta WMA stands head and  shoulders above other WMAs.

“Atchafalaya Delta will most always be the premier coastal area, due to its numerous acres of higher-elevation spoil islands at the main delta, which serve as great. semi-upland deer habitat,” Campbell said.

However, changing conditions there indicate potential trouble for the future of deer hunting on the WMA. Campbell noted that the deer harvest has “trended down.”

Neighboring properties with similar marsh habitats also show a decline in deer densities, he reported, probably because of consecutive years of high water in the marshes. Other issues contributing to lower deer densities on Atchafalaya Delta WMA include the lack of optimal cover, habitat deterioration and tropical storm/hurricane-related impacts.

At Salvador/Timken WMA, 23 deer were harvested in 2020-21. The area is nearly all fresh marsh with higher spoil banks along canals across the WMA. Browse availability is mostly herbaceous with the exception of some woody browse species along the spoil banks.

About Don Shoopman 431 Articles
Don Shoopman fishes for freshwater and saltwater species mostly in and around the Atchafalaya Basin and Vermilion Bay. He moved to the Sportsman’s Paradise in 1976, and he and his wife June live in New Iberia. They have two grown sons.