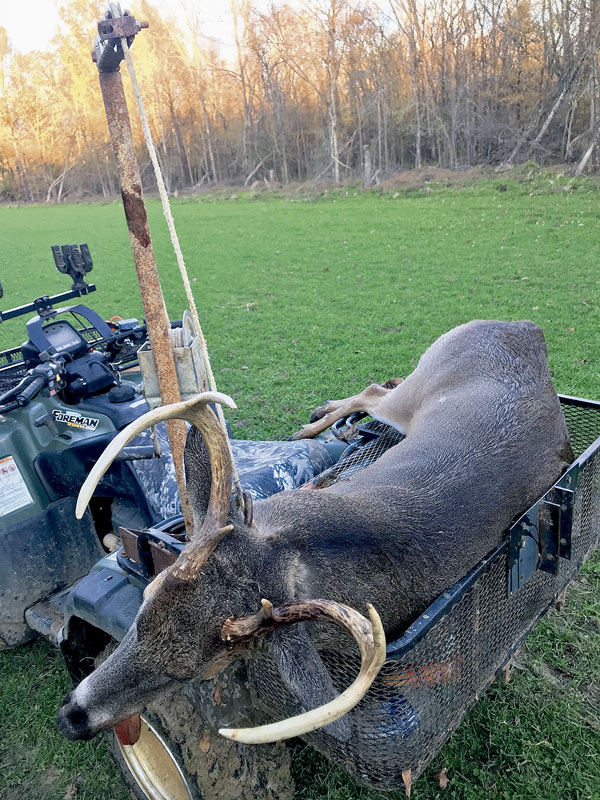 If you build it, they will come. Keys to food-plot planting success with deer season on the horizon.

In a day when there is an app for almost anything, there are still a few things that you just have to do for yourself.

One of those is to “plot” your deer hunting strategy.

This is the time to get started, if you haven’t already.

“Plotting” for deer success, in this instance, involves more than studying the rut, setting up feeders and looking at moon phases. It means planting food plots to attract deer, keep them close by and maintain a healthy herd.

It’s a simple fact. If you build it, they will come.

But there is a lot more to building successful food plots for deer than borrowing your hunting buddy’s tractor, tilling up a few shooting lanes and grabbing a 40-pound bag of some sort of seed a couple of weeks before the season opens.

To know food plots, it helps to know deer and the land. Jim Rolfe of Oak Ridge certainly fits that bill. A sales agent for Brown Realty, which specializes in outdoor properties, he has been farming for more than 40 years. He killed his first deer — a spike — when he was 8 years old.

“I always plant winter stuff, and there are two keys to success that sometimes people skip,” says Rolfe. “First, you need to get your soil analyzed, and second, you need to figure out the best fertilizer to really get it going.

“On our main food plots, we put out lime when the soil analysis calls for it. And we use nitrogen to really make it grow. We also mix fertilizer with the seed; you have to apply it as soon as you mix it, but it turns out great.”

Rolfe is an early starter out of necessity. He can’t get equipment through a wet area he has to cross to get to his hunting spot if he waits too long. But he cautions that armyworms can be a problem if you don’t keep an eye on them. His general spread is to put two bushels of wheat and a bushel of oats per acre.

“Make sure it gets plenty of seed, ‘’ he said. “I always double-disk the area, too. We do it once in the summer to knock down a lot of the grass and weeds and then right before we plant. I always run a harrow over it before and after seeding to level it off and make sure it is spread evenly.”

Rolfe’s farming expertise comes in handy making sure the stand takes. He always cuts a small ditch around the edges of the food plots to get the water off before planting and keep it off. He also cuts water furrows across the plots to aid in keeping them dry.

“Food plots have to have water to grow,” he said, “but they won’t grow if it is standing in water or boggy. It’s like anything else you plant.”

Rolfe has some hunting tips for food plots, too.

“We don’t shoot does, and we don’t shoot coyotes or other predators over the food plot,” he says. “It doesn’t take much to scare a herd of deer off from coming out during daylight hours, even to a great food plot. They live with coyotes all day-long, but gun shots? That’s a different matter. We also don’t shoot does on the food plots. We find edges of the hunting areas to do that.”

If you are careful getting in and out of food plots and don’t make it obvious something is going on there besides the dinner bell ringing, even big bucks will come out to eat during daylight hours. They will often chase does across the open, cultivated areas during the rut if they don’t know you are there.

Hunt the edges of food plots as well, especially later in the season. While big deer will chase does anywhere during the rut, when they are in their normal routine, they don’t come out into the open very often during daylight hours. Rolfe only uses one corn feeder on a plot as well, so deer know where that sweet spot is — and so do the hunters.

The circle of trophy deer life

Some of the biggest deer in Louisiana are harvested each year because of flood plots, but not on food plots. That’s because old, wise deer may only visit food plots at night, or sometimes not at all during the season. But because of all the deer activity there, they won’t be far away.

When you are hunting food plots, take the time to circle the woods around the food plot and look for scrapes, rubs and recently used deer trails. You might just find that the biggest of the bucks are circling around you while you hunt, but never stepping out in front of you. Those deer may never be seen from a box stand, but you can move to a tree stand or ground blind and get within range for a good shot.

The food plots are crucial to holding the deer, though. And they offer nutrients to the big deer that they would otherwise not get.

If there was a “Food Network” for deer, these are some of the best “dishes” they’d be preparing and when they’d be preparing the meal (recommended planting times in parentheses) to draw deer to the dinner table this fall. And remember, if you don’t do a good job, you could get “chopped” from deer hunting success.

Winter peas are expensive, but they add a whole new level of gourmet nutrients to your food plots.

Crimson clover is one of eight varieties of clover that can be planted in Louisiana, including subterranean and Ladino clovers.

Oats are great for early season but are not as cold tolerant as some other plot grains. But they are a favorite of deer.

Two of the easier food-plot regulars, these grasses are extremely cold tolerant and provide good hunting spots throughout the season. They can be planted alone or as part of a more nutrient based mix.

Another staple crop that is easy to broadcast and grow. Mixed in with rye grass, it’s one of the most common types of Louisiana food plots.

Deer hunters wanting to invest a few bucks can plant almost anything that deer will eat, from turnips, mustard greens and wild radishes to enhance deer food plots. Deer will eat them all season-long.

And, hunters, file this information away for next spring for full-year management of your deer hunting grounds. Some of the best attractants and good planting times for warm season food plots are:

Timing is (almost) everything

Knowing what not to do is just about as important as knowing what to do when it comes to growing food plots for deer-hunting success. The most-common mistakes that cause food plots to fail are not taking into consideration soil types, available moisture and timing. In fact, timing is everything. Well, almost.

Experts at the LSU Ag Center point out that serious “plotters” should start early and get soil samples to ensure food plots can reach their maximum potential. Most don’t do that, and it’s a serious mistake. Getting samples and having them analyzed can boost a food plot’s success; you know what to plant and if any added nutrients are needed.

Food-plot plantings can offer year-round benefits for deer management. Warm-season food plots are planted April through June, and cool-season plots should be planted in September and October, even later if the weather is extremely hot.

Planting too early for hunting season, especially for cool-season plots like oats, rye, wheat and rye grass, can lead to poor production. When you plant certain crops before their time, it’s too hot for cool-season forages to grow, and native grasses choke out planted species. You can also have issues with army worms and blast, a fungal disease, in the hotter months.

To maximize food plots for hunting success, hunters need to take inventory of what native browse exists for deer. Never overlook the help that Mother Nature has already given you. Simply fertilizing stands of Japanese honeysuckle, blackberry and dewberry will greatly enhance your efforts.

If you can, it’s also good to plant when there is a good approaching rain, but not a flood. That helps secure the seed in the soil and get them going.