Try these ideas for adding almost all the comforts of home for a relatively light hit to the wallet.

For most hunters, especially those who live in larger, metropolitan areas, finding land to lease means having to travel a few hours from home, sometimes even out of state.

Having a comfortable place to stay and basic facilities are top priorities; however, leases are not forever, and building a hunting cabin can be an expensive proposition you can’t recoup when it is time to go. But setting up a place to operate off-the-grid is fairly easy and inexpensive, and it can even be done with portability so you can move it to another location.

Two friends and I were excited to see a deer-hunting lease that was available a couple hours from home. The excitement grew when the owner mentioned that the 300-acre property featured a “camp house.”

It sounded like the perfect place for the three of us. I had dreams of a cozy cabin with a white picket fence. We took a tour of the property and saw decent deer sign, good trails and roads, nice terrain mixed with hills, creek bottoms, pine plantations and a couple of small fields with shooting houses. It was just what we dreamed about.

However, when we came to the camp house, it more closely resembled a crack house. No utilities, rat-infested — and the previous group apparently lived like cavemen.

Getting the ball rolling

My hunting buddies, Steve Savoye and his son, Steven, are uber-talented carpenters and builders, so we knew converting the shack into a livable space wouldn’t be a problem. However, we quickly found that paying to have electricity and water run to the property and installing a septic system was not economically feasible. The landowner was only holding the property for timber investment and had no interest in sharing the costs. We decided to go ahead and lease the property, even if it meant staying in a hotel room 15 miles away in a nearby town.

After a few weekends of hard work, the camp house was transformed into a clean, comfortable, livable space. We had the option of using a generator for electricity, but that meant carrying it back and forth, not to mention the maintenance, fuel and noise. After doing a little off-the-grid research, we added a 100-watt solar panel to the roof. Combined with a single, high-capacity, 12-volt, deep-cycle battery, power was supplied to several bright lights, interior and exterior. The 12-volt LED bulbs have lasted for years, and disposable aluminum baking pans were used as reflectors.

The same system also powers dual USB outlets at each bunk for charging phones and operating other small USB items such as laptops and small fans. The solar-controller installation is easy, and for wiring, you only need to know positive from negative. The solar panel and controller was about $150, and the battery another $100. 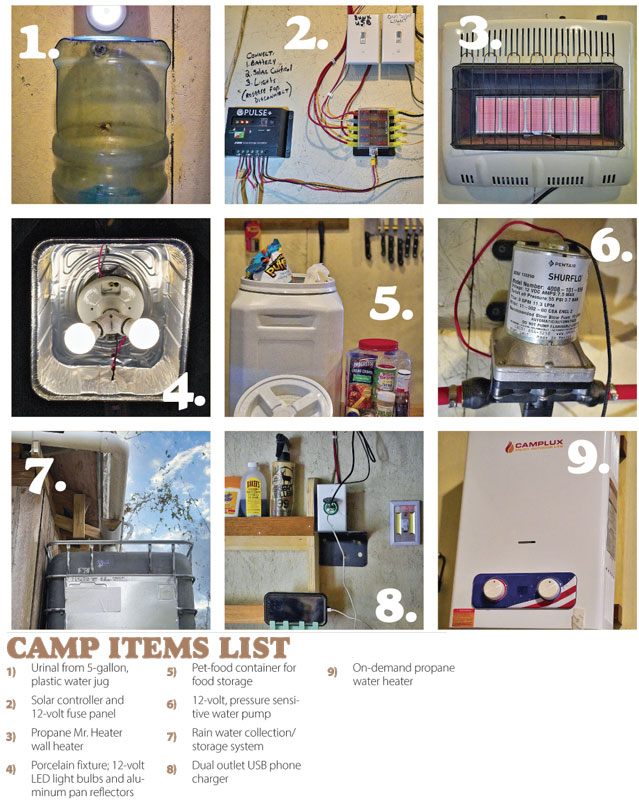 Water for drinking and cooking is necessarily brought in via 5-gallon jugs and cases of bottled water. However, an installed rainwater collection system was built from plastic gutters and a 330-gallon metal-framed plastic tote for storage. The tote was painted black to limit sunlight and is regularly treated with chlorine tablets to inhibit bacterial growth. The water enters and exits the tank through DIY gravel, sand and charcoal filters. The water from the tank is only used for the toilet, shower, and outside washing of the skinning rack and ATVs, etc. A small, 12-volt, pressure-sensitive pump runs off the solar system and carries water throughout simple PEX/PVC piping.

For the shower, a three-walled plastic enclosure was an easy install. A small, on-demand propane water heater provides instant hot water. It is certainly nice to have access to a shower after a hot October bow hunt or hours working in the sun planting food plots.

Time to go? No buckets or outhouse needed. A urinal fashioned from a cut-out, 5-gallon water jug and a fully functional indoor toilet connects to a small, nearby D-I-Y septic waste system. The system is easy and inexpensive to build; the hardest part is digging the trench for the piping, the holes for the two 55-gallon plastic waste barrels and the gravel leach field. Instructions and detailed plans are available on the internet for about $30. We bought used, plastic drums for $10 each, and the PVC pipe was about $50 — about $100 for a simple, easily maintained septic system.

Although I believe the camp solar panel could handle extra lighting, a voltage drop running wire from the camp out to the skinning rack caused the lights to be dim. A second solar panel and smaller battery was added to power a large LED light for unloading the trucks upon arrival, and two LED spotlights are plenty bright enough to clean deer.

For cooking, a combination of a flat-top griddle, single gas burner and a seafood burner all run on portable propane, as does the large wall heater. Battery operated smoke and carbon monoxide detectors add a level of safety. Any food not in cans or jars is stored week-to-week in a heavy duty, air-tight, plastic pet-food container. Although not a single rodent has been seen in the camp, it is better not to do anything to attract them.

Additional outdoor lighting comes from stand-alone solar/LED rope, wall and even Christmas lights. A couple of motion-sensor LED spotlights activate upon loading up in the morning or walking or riding up after an evening hunt. A couple of game cams are strategically hidden to monitor for any unwanted visitors while no one is there.

We were lucky and had a rudimentary building to work with, but many leases are property only. When it is time for us to go, almost everything can be removed and re-used. However, these same systems can be added to portable sheds and shipping containers and made into small camps that can be moved off the property if you lose the lease or decide to go elsewhere.

When you walk into the camp and flick the switch, the lights come on just like at home. The 12-volt system can’t run an air conditioner, but a small generator can power a compact window unit for those few early season hunts where it may be a bit warm. Inexpensive, removable, portable and off-the-grid. Pretty much all the comforts of home and no utility bills.

About Chris Holmes 238 Articles
Chris Holmes has kayak fished in the Gulf of Mexico, the Atlantic and Pacific oceans and many places in between.