Decoys aren’t just a duck-hunting tool. Deer decoys can stop and even draw deer closer. And this hunter knows exactly how to maximize their use.

If you were talking about hunting and someone used the term “decoy,” you’d likely think this person was a duck hunter.

But that’s not the case with West Monroe’s DeWayne Richardson.

If his name sounds familiar, then it should: Dewayne and his sons John David and Dalton killed trophy bucks last season — and Dalton’s 146-inch 9-point was killed with the use of a doe decoy the Richardson’s have affectionately named “Betsy.”

While interviewing the Daltons about that buck, I could tell Dewayne was skilled in the use of a decoy, and I slowly began to pick his brain about the topic.

Dewayne’s first fling with a decoy was roughly 15 years ago, and he remembers it like it was yesterday.

“I’d read about decoys in magazines and always wondered what it would be like to use one, so one weekend I decided not to put my trail cameras on a scrape or a trail to find a big one: I was going to leave my doe decoy out in the food plot overnight and see if I could get a picture of a big one like that,” he explained. “So the next day I got the camera and went to have the film developed, and what I saw was simply awesome.

“I had about four different bucks come to it and check it out. I could tell that it was a lot more attractive to them than I ever could have imagined, and that’s what sparked carrying it around with me all the time, thinking of ways that it would be beneficial to me.”

The next season he began to use the decoy more often, but only in a situation where he needed the deer to stop in order to make sure it met the criteria for the deer his Mississippi hunting club wanted to kill.

“It helped to make them stop and look at the decoy so I could have time see the antlers better,” the elder Richardson said. “After a few years of that, I got to see how they reacted to it, especially in the rut.” 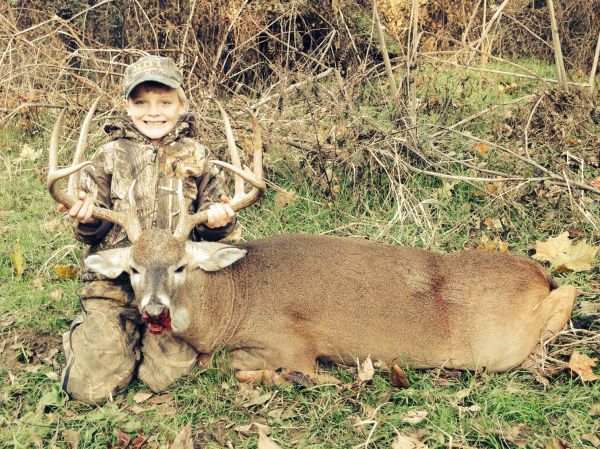 Richardson was so amazed at how deer would actually come to the decoy and react to it that he ended up adding it to his bowhunting strategy later on — but it took several years for him to warm up to the idea of hunting over a decoy.

“I mean, let’s face it: This isn’t duck hunting,” he said. “It really took me a few years, but I eventually learned how to use and when to use it.

“It’s just takes someone to be bold enough to put it out there. In all reality, in the right situation— especially during the rut — it’s hard to beat.”

Proper use of a decoy is one of the lessons the veteran hunter has learned.

“I like to set up with a doe decoy facing away from me at around 15 to 18 yards and using the estrus bleat mouth call,” Richardson said. “I’ll use the call and just bleat, especially if I’m not seeing any deer — and I will generally get responses pretty regular.

“The bucks that would come in would see it, stop, watch it for a bit, and then come on it and circle it. I really saw how effective it can be for bow and gun hunting. I basically just wanted to draw the deer in close enough to judge their horns and create an opportunity for a shot with my bow.”

During the rut, Richardson uses the same setup, but adds an estrus scent to it.

Typically the scent is applied to the tail or back end of the decoy, and then Richardson likes to set the open bottle on the ground right between the rear legs of the decoy.

“With the open bottle, the scent is really strong coming out of it,” he said.

But he has found decoying to be a really effective way to determine if a new hunting spot will be productive.

“I … like to use the decoy during the rut in an area that I may not have ever hunted before, just to see what’s there,” Richardson said. “In the state of Mississippi, you can’t use bait, so what I like to do is leave the decoy out overnight on private property in front of a camera, and when they see it they’re coming for it — and if you can put your camera on video, the footage is really amazing and fun to watch.”

Of course, with everything good there is always some bad aspects.

One negative thing Richardson has discovered with a decoy is the way alpha does react to it.

“Naturally, when a doe is in the area of another doe that’s in estrus, the does that’s not in estrus does not want to be around the situation,” he said. “When a mature doe comes around the decoy with the estrus scent, you can tell it makes the doe uncomfortable, and they’ll either blow or just leave out.”

Probably the best reason for using a decoy is the curiosity appeal of it and the ability to make a traveling deer stop for a shot opportunity or for the hunter to simply be certain about what size antlers the deer has — the same reason that started Richardson use of the decoy in the first place.

“If all you’ve got a long lane and all you want to do is make a deer stop as he’s crossing that lane, a decoy is great for that,” he said. “It makes it so that you don’t have to jump up, glance real fast and make a quick decision.”

By the time a hunter checks the other side of the lane, a deer could be over halfway across with no intention of stopping, but a decoy can hold its attention and make it stop, giving a hunter just enough time to make an ethical shot.

“I’ve seen them stop anywhere from 15 second to five minutes and just stare at the thing,” Richardson said. “It all depends on just how hard they may be rutting.”

This was just the case in November 2014, when Dalton Richardson killed a 146-inch 9-point with the help of old Betsy.

“The spot where we were hunting just wasn’t working,” the elder Richardson said. “I knew the buck was close to us, but I knew he had to be skirting us. I went to a long stretch right past us, where I thought he was getting by us, and put (the decoy) out.” 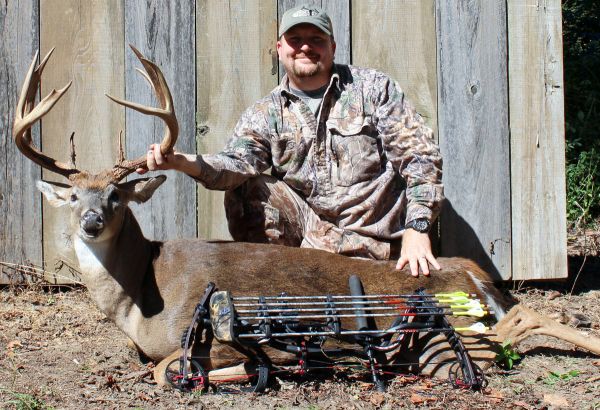 Richardson then put scent on the decoy 15 to 20 minutes later; the decoy did its job.

“The buck was laying downwind of the decoy in a thicket,” he said. “He let it get just quiet enough where he felt comfortable, and then come just to where he could see the decoy and stopped.

“When I first saw the deer, it was in love. He was sold on the decoy right there. When Dalton shot it, it fell literally 10 feet from the decoy.”

How to properly use buck decoys

When it comes to hunting with a buck decoy, the game changes significantly.

While Richardson tries to lure deer in with a calmer-looking doe decoy, throwing out a decoy with antlers calls for a totally different situation — one where aggressive sounds like grunting and rattling horns might be used.

“I haven’t used a buck decoy as much, but when I have been successful with it was during the peak of the rut when bucks are really aggressive and displaying dominance,” Richardson said. “A dominate buck will come in with his ears laid back, strutting sideways, and either hit the decoy or circle it a few times and give you a shot.

“Most of the time — especially if you’re using rattling horns — a buck will just come in and survey the situation and get within 40 to 50 yards, looking for the hot doe that (the decoy) is looking for, and then just ease off.”

Richardson has also discovered it’s important to change positioning of the buck decoy. Where a doe is positioned to face away from the hunter, Dewayne likes buck decoys to face him and for good reason: When a buck comes in, it’s probably looking for a fight.

“When a buck comes in, it’s like they want to circle it and be at the front of the decoy — I guess just in case it wants to fight or whatever, they’re ready,” Richardson said.

Circling to the front of an opposing buck is a naturally aggressive action for a dominate buck, and that leads the deer right where you want it to go.