When Chris Felder, a 36-year-old home repair worker who lives in Ethel in East Feliciana Parish, began cleaning the massive 10-point velvet buck he arrowed on Oct. 1, he discovered something interesting.

“The first thing I found was a mushroomed high-powered rifle bullet in his shoulder area,” Felder said. “When I was skinning in the neck area, I noticed some black spots and on further examination, I found small shotgun pellets. The buck had survived being shot twice, first with a rifle and then with shotgun pellets and his luck ran out when I put him down with an arrow.”

The saga began a week before archery season kicked off this year when he found a single photo of the buck in full velvet on his trail camera. Getting off work early on Oct. 1, Felder decided to head to his stand on private property he has permission to hunt in neighboring West Feliciana Parish. 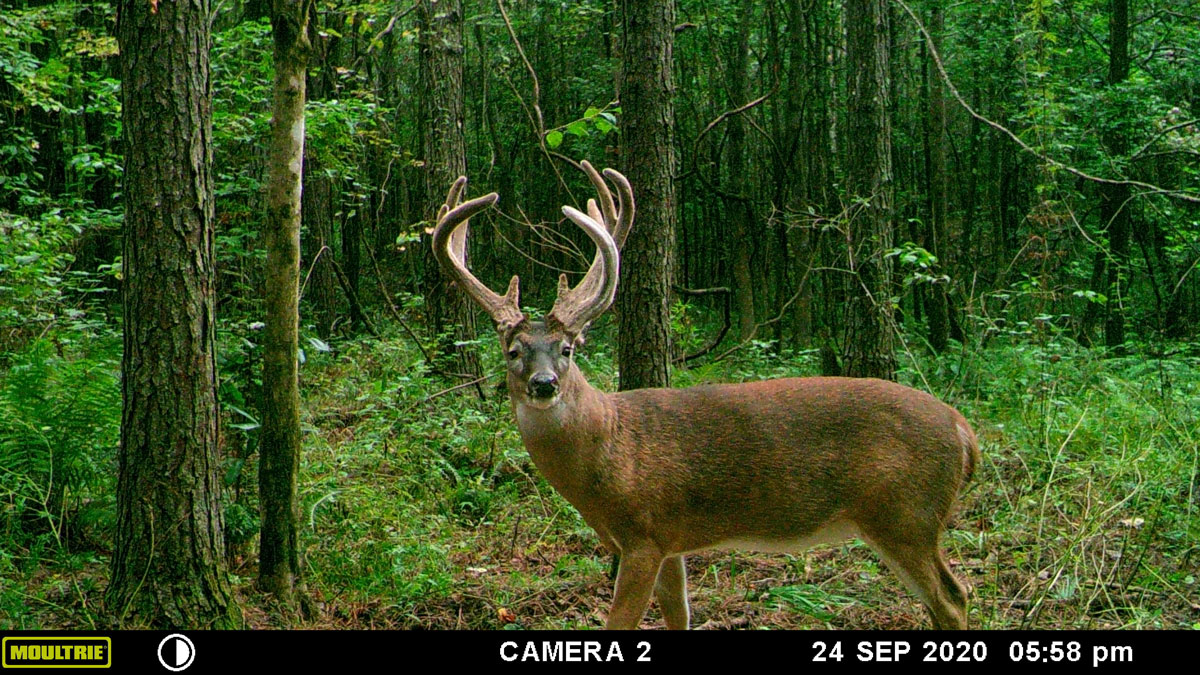 “I had hung a lock-on stand 20 feet up a tree with big pines all around but adjacent to an oak flat with ridges on both sides,” Felder said. “Before climbing into my stand, I had put out a pile of rice bran 20 yards or so from my stand. I also pulled the card from my camera to check and see if the big buck had been back. He hadn’t and all I saw was pictures of some smaller bucks.”

As the afternoon wore on, just before 6:00, Felder was alerted to footsteps in the leaves out from his stand. Whatever was walking would take a few steps and stop before proceeding.

“I began to see a deer’s legs and figured it was probably one of the young bucks so I reached in my bag and got my camera and began videoing,” Felder said. “He took another step that put his head in a small opening and I could see antlers through the brush and I saw enough to know it was the big one I’d seen on camera. At that point, I put away my phone and picked up my bow.

Everything falls into place

The buck finally stepped out into a clearing some five yards from the rice bran and Felder noticed he seemed to be sniffing the bran and licking his lips. He finally walked up to the bran, took a bite and then something alerted the buck.

“Something behind him broke a stick and the buck turned to look in that direction,” Felder said. “When he turned to look back, I drew my bow and was settling the pin on his shoulder when there was another noise in the thicket and he took a couple of steps in that direction. I’m at full draw waiting for a broadside view and what seemed like more than a minute I’m wondering should I continue to hold a full draw or release. I decided to hold my draw and my arms began shaking and I’m praying Lord please let him turn back and get broadside.”

The buck finally turned back toward the feed, presented a broadside shot and Felder released his arrow. He shoots a Matthews bow, Easton arrow with a Rage Extreme broad head.

“He took off fast but I felt I had a good shot placement so I sat in my stand, calling my wife and then my boss letting him know I might be a bit late to work the next day and he was fine with that,” he said.

Climbing down 20 minutes or so later, Felder went to the spot where the deer was standing, didn’t find his arrow so he decided to back out and come back later with some friends to help. The buck left only a small blood trail, but much to Felder’s relief was finally located around 11 p.m. that night.

The buck in full velvet had a rack consisting of 10 points with a double beam on one side with an inside spread of 15 7/8 inches and heavy bases. Estimated to be 6 ½ years old and weighing around 185 pounds, the buck was scored with 152 inches of antler.