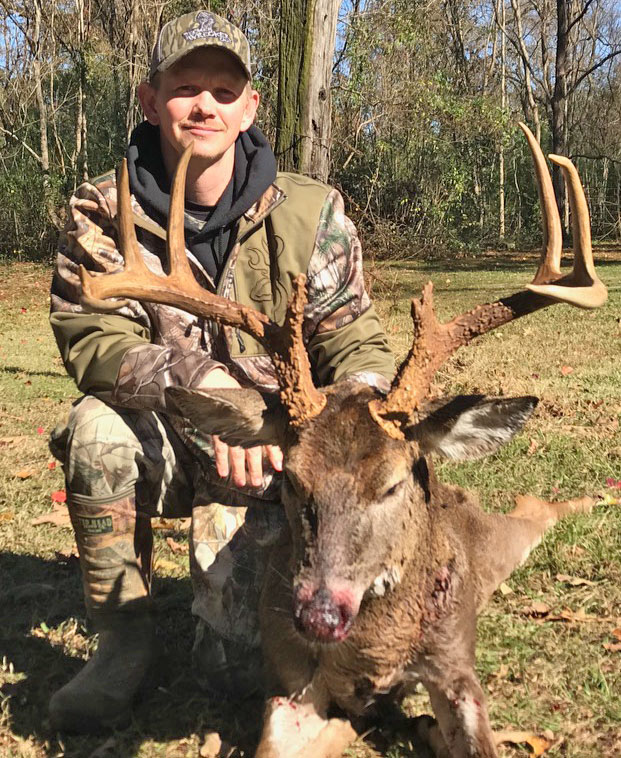 Brandon Scott, who lives in Blanchard where he works for that city’s fire department, hunted on a friend’s stand to down a big 12-point after the friend got an 8-point buck a few days earlier on Scott’s stand.

“This is a stand I would probably have never hunted but I had given a friend to whom the stand belongs permission to hunt one of my stands supposedly to hunt hogs,” Scott said. “However a big 8-point buck stepped out and he shot it. When I got ready to hunt the afternoon of Nov. 28, I was planning to sit on one of my stands when the friend said ‘turn about is fair play; why don’t you go sit on my stand?’”

Scott is a member of a hunting club in north Bossier Parish, a club consisting of 2500 acres between Plain Dealing and Springhill. The friend’s stand he was hunting on that afternoon is a box stand that overlooks a pipe line with a dim road leading to a well site.

“The afternoon before, I was sitting on my stand and there wasn’t much going on. I texted my wife, kidding her with a photo I had found of a big buck someone had shot and told her ‘Look what I just shot.’ I had her fooled at first but told her I was kidding,” he chuckled.

On the afternoon after he shot the big 12-point, he texted his wife and she thought he was kidding again. He had to convince her he was serious this time.

Climbing into his friend’s stand around 2:00 that afternoon, things were quiet with little activity going on. Scott was on his phone texting friends when he happened to look up and there stood this big buck a mere 30 yards away.

“I thought it was unusual for a buck this size, a mature one, to come out so early,” Scott said. “A big one is more likely to appear just before dark but this buck was just standing there at 4:30.”

Making sure he didn’t make any mistakes, Scott put down his phone and picked up his rifle, a Remington Model 700 .308, and eased it out the window.

“The buck was quartering away from me just a bit and I took my eyes off his rack because that can mess you up; I just knew he was a shooter,” he said. “I put the crosshairs on him and squeezed the trigger. I could tell I hit him because he wheeled around and took off through the woods.

“That’s when I texted my wife and had some trouble convincing her I wasn’t kidding this time,” he laughed.

Scott climbed down from the stand and walked over to where the deer was standing when he shot.

“I looked all around and could find no blood, no hair, nor anything to indicate I had hit the deer,” he said. “I walked on down the lane looking for sign. Then I happened to look out into the woods and was relieved to see a white belly shining. The deer was piled up; he had run only 40 yards after I shot.”

The buck had a rack of 12 points with seven on one side and five on the other. Inside spread was an impressive 22 inches and bases were 6 inches each with main beams 24 and 25 inches. Weighing in at 225 pounds, the buck was estimated to be 6 ½ years old.

Scott texted his friend on whose stand he had hunted and who had downed a buck on Scott’s stand with a photo of the deer and a short message, ”Now I guess we’re even.”