Cory Fontenot lives in Kinder but has a favorite hunting spot upstate in Tensas Parish, the Buckhorn Wildlife Management Area. He and a couple of friends from Oakdale keep a portable building converted into a camp at Bob’s Campground next to the WMA.

On Jan. 7, Fontenot got a huge reason to love the Buckhorn WMA: a tremendous 10-point buck that was likely the biggest taken in Louisiana this season, a monster that grosses more than 177 inches with very few deductions.

“We had gone up to take advantage of a primitive firearms either-sex hunt, and on Jan. 6, we scouted the area looking for good spots to hang our stands,” Fontenot said. “I had found something that got me pretty excited; there were scrapes and rubs obviously made by a big deer. After finding all the good sign, I went back that afternoon and hung my climbing stand in the area in the hardwoods and palmettos where I had found the sign.”

Walking to his stand that afternoon, he jumped a deer but didn’t see it and was unable to tell what it was. But to Fontenot, 38, who works as a plant technician for W.R. Grace, it sounded like something big as it ran off through the woods and continued blowing at him until he left at dark.

“The next morning … I went back into the area where I had hunted the afternoon before, hung my climber and stayed there until around 11,” he said. “I didn’t see any deer, but a big herd of about 20 hogs came through under my stand. I’ll usually shoot a hog if I have the opportunity, but these came through early that morning, and I didn’t want to mess up the chance at the buck that had made all that sign, so I let them feed on through.”

After returning to camp and having lunch, Fontenot headed back for his special area around 1:30 that afternoon. He decided to scout a bit more and found an area deeper into the woods with more sign of a big buck, so he decided to hunt there.

“There was more good sign, so I put my climber on a tree and only hiked it up about 15 feet because the foliage above that was so thick I couldn’t see if I was higher than that,” he said. “I had used cover scent walking in because I felt good about the area, and the buck sign I had found indicated I was hunting a really nice deer. As it turns out, I’m glad I had used the cover scent.”

In his stand for no more than 15 minutes, Fontenot heard a noise in the palmettos behind his stand, along the trail where he had walked in on.

“I turned and looked toward the noise, and there stood a big buck, 30 yards away, standing right where I had walked,” he said. “The buck was not looking toward me, so I eased all the way around and propped my gun against the tree. I had to sit all twisted around and keep my eye on him, as he was behind some bushes, and I didn’t have a shot.

“After a minute, my gun was getting wobbly, and I had to ease it down and take some deep breaths because I was looking at a deer like none I had ever seen. He finally took a step from behind the bushes (and) I got my CVA .444 on him, pulled the trigger, and he dropped right there.” 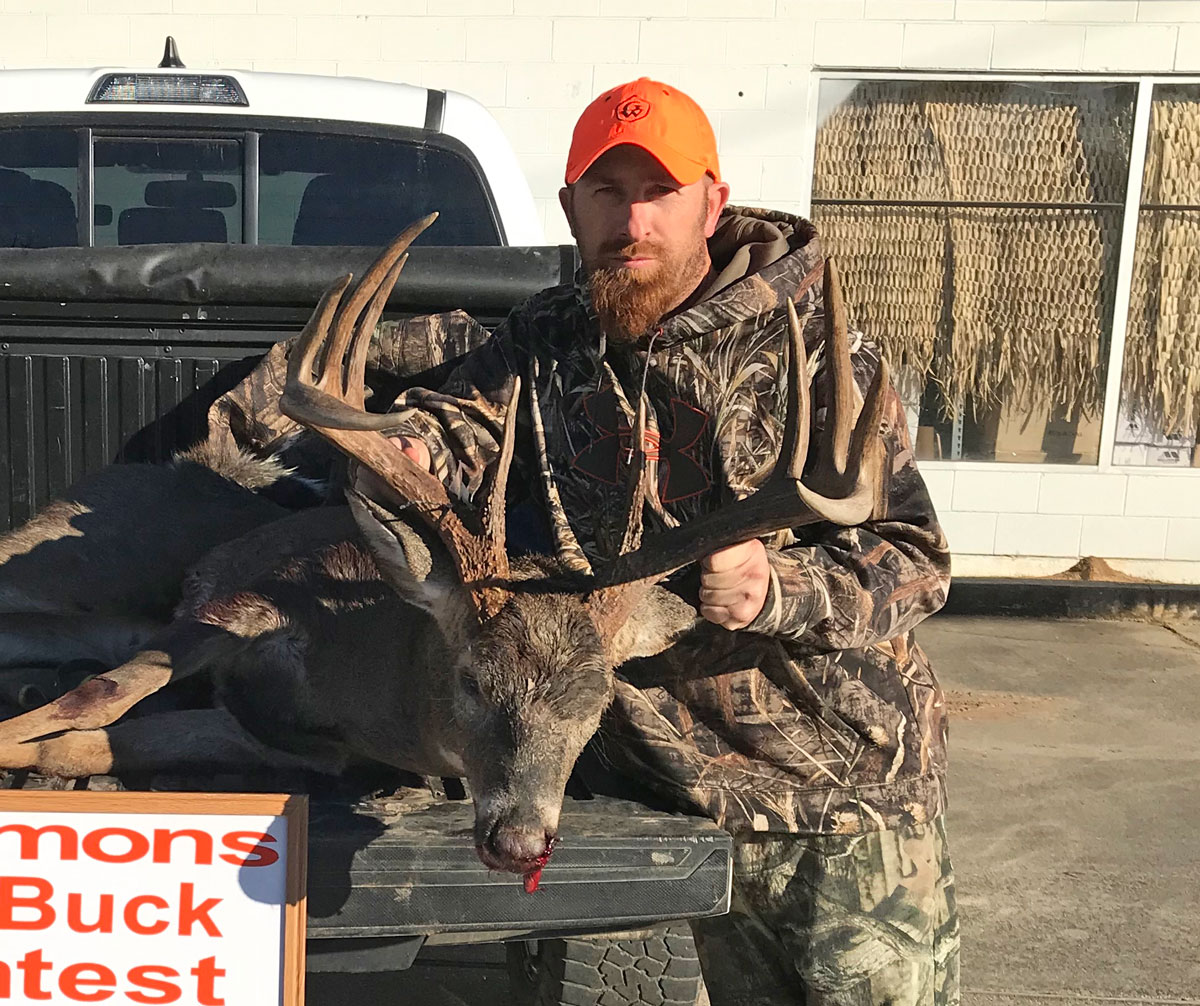 My first reaction was to reach for my phone, call my wife and tell her I had just shot a monster buck. Then I called my buddy, Arlis Smith, who came and helped me drag the deer out across a little creek to my 4-wheeler.”

The buck, which showed the effects of the rut, still weighed 220 pounds and sported a rack of 10 symmetrical points. The inside spread measured 20¼ inches, with 26-inch main beams. Every tine on either beam was at least 6 inches, with the largest at 10 inches, with six of the eight circumference measurements being better than 5 inches.

Fontenot entered the buck in a big-buck contest at  Simmons Sporting Goods in Bastrop. The rack’s green score to enter that store’s big buck contest, the green/gross score of the rack was an impressive 177 2/8 inches, with slightly more than 2 inches of deductions.