Tony Randall and Jack Klugman were the popular “Odd Couple” of television fame. In the world of the whitetail deer, another “odd couple” has emerged in Jackson Parish, an old doe and a big velvet buck that always kept company with her. Unfortunately for the buck, this close companionship led to his demise late on the afternoon of November 6.

“Any time the old dark colored doe came out to the food plot to feed, the buck was following closely behind. I suppose she could have been his mother. We knew that one day she would be responsible for one of us on the Calhoun Bottom Hunting Club downing him,” said 36-year-old Derek Goss, of Quitman, who was the lucky hunter who shot the strange looking buck.

“We had been getting pictures of this odd looking buck for the past several years but with the exception of a turkey hunter who saw him, none of us on the club had ever laid eyes on him. However,” Goss continued, “we knew he kept company with the old doe and one of us would have a chance at him. Lucky for me, I was the fortunate one.”

A chance of a lifetime

Goss’ 8-year-old son, Tucker, wanted to hunt Tuesday, Nov. 6, so his dad took him with him to a stand on the 5800 acre club. They saw no deer they wanted Tucker to shoot but while sitting there, about 5 p.m., Goss’ phone “pinged” indicating that something had triggered one of his cameras near another stand. Checking the photo the camera sent, there was the big buck feeding near a different stand.

“I had been getting photos of the buck regularly all through bow season with some daylight photos. Unfortunately,” Goss said, “I was never able to hunt him during bow season. Then he just stopped showing up on my cameras for about two weeks until that Tuesday afternoon.”

Taking Tucker with him Wednesday afternoon, Goss climbed into his box stand late that afternoon hoping the buck would show up.

“We were watching a couple of does feed on the plot out from the stand when the old dark colored doe came out to feed at about 225 yards. I got my gun, my Browning .270 short mag, out the window and waited for what I was pretty sure would happen next. Sure enough, the buck stepped out behind the doe,” he continued.

Time to make the shot

When the buck stepped out, he whispered to his son to sit still because the buck had come out. Tucker grabbed the binoculars to look at the buck when the deer became suspicious and turned to go back into the woods.

“I got him in my scope and touched the trigger. He buckled but ran and I was afraid I had hit him too far back,” Goss said. 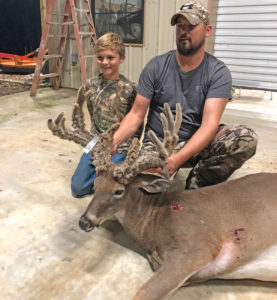 As daylight was fading, Goss decided not to wait and walked down to where the buck was standing. He stood up on a stump to improve his view and when he did, he could see the buck as it jumped up to run. He was able to get off another shot at the fleeing deer.

Calling two friends who came with a blood trailing dog, they found the buck dead after it ran some 250 yards. The second bullet had hit squarely behind the shoulder.

The buck was something to behold. Sporting a full velvet rack of somewhere between 16 and 20 points, the inside spread was 17 inches and bases were 11 ½ inches each and carried mass all the way to the ends of the antlers. The buck, which weighed 235 pounds, had a single testicle that had not emerged from the body cavity.

Sign Up Now
About Glynn Harris 355 Articles
Glynn Harris is a long-time outdoor writer from Ruston. He writes weekly outdoor columns for several north Louisiana newspapers, has magazine credits in a number of state and national magazines and broadcasts four outdoor radio broadcasts each week. He has won more than 50 writing and broadcasting awards during his 47 year career.