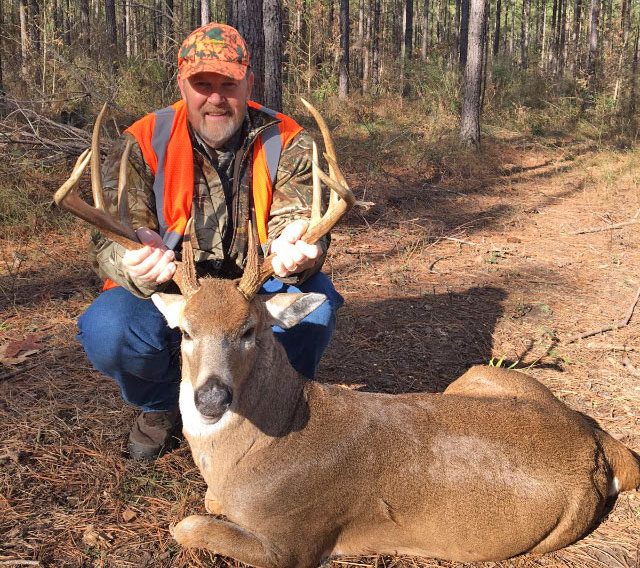 Steve Davidson, 70, grew up in Claiborne Parish and still owns land near the village of Athens. He lives in Southlake, Tex., where he retired from the business of building interiors for corporate and head-of-state aircraft.

Davidson joined the 3700 acre Leatherman Creek hunting club in southwest Claiborne Parish years ago when the club was first formed. He was a member for several years until his employment created a problem of driving from his home northwest of Dallas back to Louisiana to hunt, so he got out of the club.

“After retiring, I joined the club again three or four years ago and I come back during deer season to hunt,” Davidson explained. “When I come over from Southlake, I stay with my sister who still lives on the old home place at Athens.”

Davidson came over three days before Thanksgiving this year, purchased a five-day non-resident license and hunted every day, seeing plenty of does but no bucks. He returned to his Texas home with his sister for Thanksgiving and returned to Athens the day after.

“I purchased another five day non-resident license with plans to hunt every day starting Saturday morning and afternoon,” he said. “It was pouring rain Sunday morning so I didn’t hunt but was on my stand that afternoon.”

There was a big buck in the area that no members of the hunting club had ever seen, but a worker for the power company reported to a club member that he had seen the biggest buck he had ever seen chasing a doe in a burned clear cut.

“The clear cut is across the road from my stand and I can actually see the area from my stand,” Davidson said. “I hunted Sunday afternoon, Monday and Tuesday morning and evening. A couple of does had shown up and although I was hoping to at least have some venison to take home, the thought of that big buck caused me to hold off on shooting a doe. Tuesday afternoon I saw several does that I passed on but told the guys at camp that night that if one shows up tomorrow (Wednesday), she was going back to Texas with me.”

Wednesday morning, Dec. 2, Davidson was back on his stand when he saw a big deer step out on his west lane with his head down, but the deer crossed the narrow lane before Davidson could identify what it was.

“I had decided that I was going to leave the stand around 9:30 and head back to Texas without a deer,” he said. “Around 9:10, I had given up, closed and latched my windows and began gathering my gear. Then I looked up and a doe crossed my north lane with a small buck following her. I unlatched my windows and put my stuff down when a couple of minutes later, a doe and two yearlings came out near the feeder. They were on my shooting lane facing me so I got my rifle up – I shoot a Browning A-bolt in .280 Remington – put the crosshairs on her waiting for her to turn broadside.”

Having his eye on the doe through his scope, he saw movement in the upper part of his scope and saw antlers and refocused his aim.

“We have had a young 10-point buck on camera and had decided to give him another year,” Davidson said. “When the buck I was watching stepped between two pines on the shooting lane, I was ready. When his shoulder entered the narrow opening between the pines, I squeezed the trigger and the buck disappeared. My first thought that gave me concern was that I had shot the young 10-point.”

Walking down the lane the 90 yards where the buck was crossing when he shot, Davidson said there is a little swag with a ridge on the other side. When he stepped up on the ridge, he saw the buck belly up with all four feet in the air and antler tines sticking in the ground.

“I still thought it was the young 10 until I pulled the antlers out of the ground and saw what I had shot,” he said.

The buck was indeed a 10-point, but one much more impressive than the protected one. The rack had an inside spread of 20 inches with heavy mass throughout the rack. The buck weighed just over 200 pounds and was scored at 160 5/8 inches.

“I have to give my cousin, Marion Stovall, credit for me getting this buck,” Davidson said. “He showed me the spot where my stand should be and while I was in Texas he bushhogged and cleared the area, putting up poles to hang feeders and actually setting up the stand for me.”

Although no doe rode with Davidson back to Texas, reliving the memory of downing the big 10 undoubtedly provided ample solace.